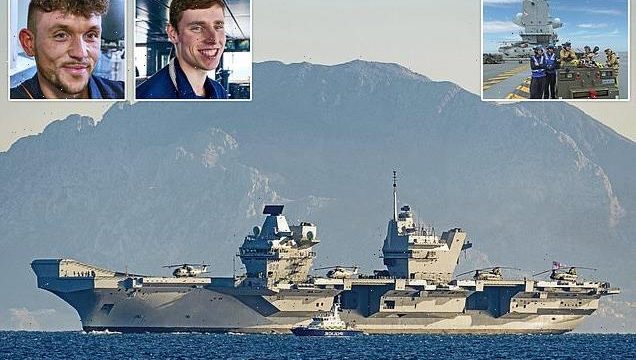 Life aboard HMS Top Gun: Carrying 18 stealth fighter jets, HMS Queen Elizabeth is Britain’s biggest warship – and BBC cameras caught all the drama on board including the terrifying moment a £100m plane fell off the bow

‘Living the dream, serving the Queen,’ says Able Rating Ronnie Lambert, saluting to himself in the bowels of HMS Queen Elizabeth while the late monarch – her tomato-red coat leaping out against the battleship grey of her namesake – makes a poignant appearance on deck.

Lambert is a Navy chef, a former ne’er-do-well remaking his life at sea. He’s hilarious, still full of Essex-boy chat, and he is without doubt going to be one of the breakout stars in the new BBC documentary series The Warship: Tour Of Duty.

Another will be Sub-Lieutenant John Hawke, second officer of the watch. ‘The Church never rivalled the Navy but I certainly feel called by God to do something,’ he says somewhat unexpectedly of his service aboard Britain’s biggest-ever warship.

The first episode is called For Queen And Country, but frankly the BBC could have called it The Lambert And Hawke Show. Lambert is the essence of a jolly sailor. Hawke is his counterweight, a serious thinker who could mount an argument for just and moral war if asked. Pick any decade in any century since Henry VIII founded the Navy in 1546 and you’d find sailors just like them. Together they are genius. 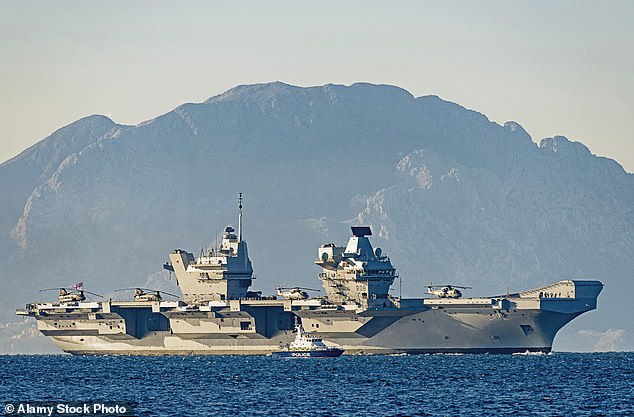 The six-parter is the work of award-winning film-maker Chris Terrill, who put his all-seeing camera at the heart of this great ship, with her nine decks, her £3.5 billion price tag and her 1,600 crew, through the seven months of her first operational deployment.

What he shows us is an odd combination of Top Gun and soap opera. On the flight deck there’s a complement of 18 F-35 stealth fighter jets worth £100 million each. Underneath you have no idea what you are going to see next: a hospital, a galley that would feed a large London hotel, even an orchestra.

Chris Terrill is equally captivated by both faces. Trying to get an action shot of an F-35 taking off, he got so close he was blown off his feet by the jet’s thrust. It tumbled him across the deck, smashing his camera and tearing his hamstring.

Yet when he films the same space on an aircraft maintenance day he finds a benign place, open for sailors to sunbathe, snooze, play ball games and promenade. Through his lens it looks more like a festival venue than a warship, with hundreds of 20-somethings – the average age on board is 24 – working on their tans. ‘Like Wotsits everywhere,’ observes Lambert.

When the carrier docks in Sicily for a final hurrah before her serious work starts, Lambert is on duty, mopping up the mess as drunken sailors stagger home. (It’s his punishment for earlier going AWOL.) ‘Everyone is going to come back p***ed. I’m just p***ed off,’ he sighs. 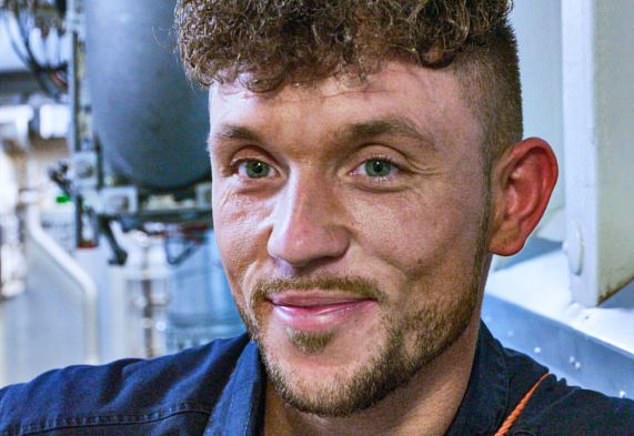 Able Rating Ronnie Lambert (pictured) is a Navy chef, a former ne’er-do-well who is remaking his life at sea

Hawke heads to a hilltop vineyard to sample some wines, a brief respite from his high-intensity apprenticeship on the bridge. ‘There are people out there who are warmongers. If we do not show we are capable of upholding law, order, peace, then we do not serve our purpose,’ he tells the camera at one point, ever dutiful.

Yet these two men, across the divide of their rank, background and outlook, clearly get on well. ‘It’s because we are sailors first,’ says Hawke, summing up what unites this floating city.

The tiny, idiosyncratic details of life on board make this a compelling watch. What is The Killer Tomato? It’s a big red inflatable launched overboard and used for target practice. What happens if you fall in love with a crewmate? Tough, there’s a strict ‘No Touching’ rule. How do you find your way around all 5km of corridors and 3,000 compartments? Um…

More seriously, why is there a Russian spy ship sailing close enough to hoover up British secrets? Because, within a few months of this being filmed, Putin would invade Ukraine and upend the world order that prevailed when HMS Queen Elizabeth caught a high tide and left Portsmouth in May 2021. We will later see the Russians provoke the ship by overflying her and approaching in submarines. 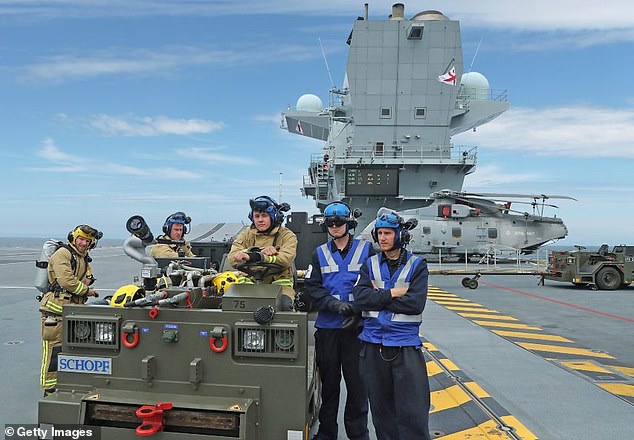 This is far from the only drama. An outbreak of Covid takes down a hundred of the crew and restricts the 40 runs ashore (time off on land) planned across the deployment to a meagre four.

Chris Terrill gets into difficulty diving with sailors in the Pacific, running out of air and fearing ‘that was it’ before struggling back to the surface. ‘The sailors who were looking for me, they thought I’d gone to join Neptune early,’ he says today of this latest near-miss in a career which has seen a few.

Most dramatic of all was the heart-stopping moment a pilot was forced to eject on take-off. His F-35 failed to get airborne and skidded off the bow. ‘I was below deck when the alarm went off,’ recalls Chris. ‘I heard, ‘Aircraft ditch, aircraft ditch’, which I had never heard before. It was a chilling feeling. You think a pilot has been killed. You just don’t know. No one knows.’ The pilot survived, although his plane was lost in the Mediterranean and would later cause an unseemly scramble, with Britain attempting to recover it from the seabed before Russian salvage experts could steal its secrets.

Presciently, given the geo-political earthquakes of 2022, this first tour was designed as a show of strength to China and Russia. The 20,000-mile voyage took HMS Queen Elizabeth through the Russian-dominated Eastern Mediterranean, down the Red Sea, across the Indian Ocean and into the South China Sea.

Although she was well defended in a task group of ten ships including frigates and destroyers, there’s a serious sense of purpose from the moment she sets sail. ‘Anything could happen,’ says Commodore Steve Moorhouse, the senior officer in charge of the force. ‘The world is a hugely fluid place at the moment.’

This ‘fluidity’ makes The Warship: Tour Of Duty a timely series. Chris Terrill, however, has been filming ‘Big Lizzie’ (as the carrier is affectionately nicknamed) since the Princess Royal cut her first steel (a ceremony declaring construction underway) on the Clyde back in 2009. He’s made one series about her build and sea trials, and a second about her first transatlantic crossing. This third part shows the ship’s fighting spirit. If you want peace, prepare for war, as Sub-Lieutenant John Hawke puts it. 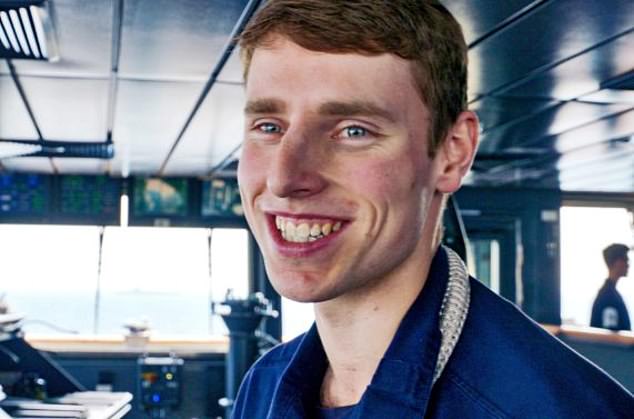 Sub-Lieutenant John Hawke, second officer of the watch said: ‘The Church never rivalled the Navy but I certainly feel called by God to do something’

Chris is an anthropologist as well as an adventurer and broadcaster. The ability to turn characters inside out for scrutiny defines his work. He wears a uniform and adopts the rank of whoever he is talking to – a principle borrowed from Naval chaplains – to establish trust, and doesn’t shy away from examining sensitive issues such as the mental health impact of Covid in such confined quarters. Even if he doesn’t see the F-35 crash himself, he bears witness to its terrifying aftermath.

He’s also there when ‘bears’ and ‘policemen’ roam the decks as part of the Crossing The Line ceremony, in which those crossing the equator for the first time pay their respects to Neptune. He’s there too when Ronnie Lambert wears his white No 1 dress for a disciplinary hearing and emerges moaning, ‘This is the campest outfit ever,’ and looking, it has to be said, more like a Stripogram sailor than anything else.

Chris was given no special treatment, squeezing into a tiny cabin. ‘My camera had a bunk of its own and I shared mine with my tripod,’ he jokes. He wanted nothing to differentiate him from the crew. ‘I am going into their world on their terms, not mine, I don’t have a right to be there, I had to earn it,’ he says.

As for his ambition in making the series, Chris says, ‘We are a seafaring nation, it’s in our blood but most people don’t know what the Navy does. It’s there to defend our freedoms and our sovereign waters, to protect global trade routes, to intercept drugs and do humanitarian work – in the aftermath of a tsunami, a war, a hurricane, these warships transform into ships of mercy. I wanted to show as authentically as I can what it means to be a Royal Navy sailor on the country’s biggest warship.’