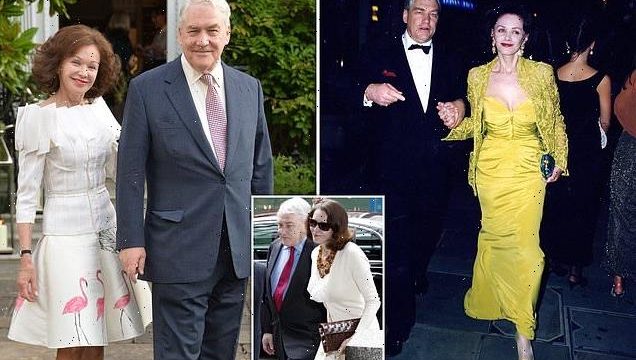 Baroness Barbara Amiel reveals how ‘noble’ husband Conrad Black told her to leave him when he was sent to prison – and insists he’s the most generous and the least intolerant man’, despite appearing ‘pompous’

Baroness Barbara Amiel has revealed how her ‘noble’ husband Conrad Black told her to leave him when he was sent to prison – and insisted he’s the most generous and the least intolerant man’, despite appearing ‘pompous.’

The 80-year-old and the disgraced press mogul, 77 – who was the former owner of the Daily Telegraph – were once the toast of London and New York society, but became social outcasts after Black was jailed by a U.S. court for fraud and obstruction of justice.

Black served more than three years after being convicted of defrauding shareholders in his newspaper company of £3.8million, but despite his prison sentence, Barbara remained loyal and visited him weekly in his Florida prison – even though he urged her to leave him.

Speaking to Tatler, Barbara explained: ‘How could I possibly leave Conrad? It’s just unthinkable. He told me to leave; he told me to leave before the trial – not as forcefully as he told me when he was convicted. I didn’t understand – I thought he was being noble.’ 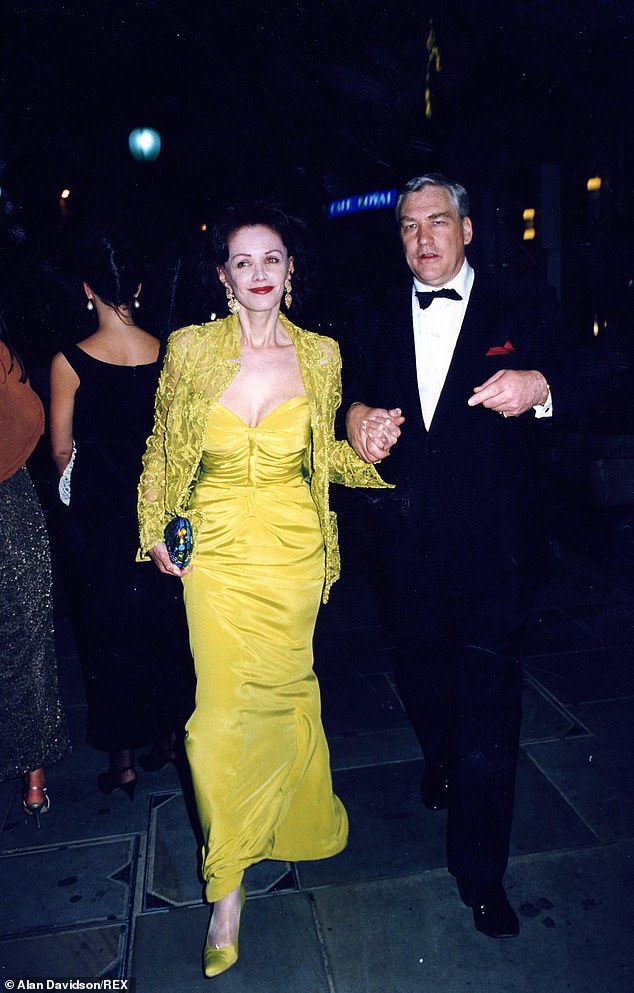 Baroness Barbara Amiely, 80, has revealed how her ‘noble’ husband Conrad Black told her to leave him when he was sent to prison – and insisted he’s the most generous and the least intolerant man’, despite appearing ‘pompous.’ Pictured, attending a party for John Aspinall at the Café Royal on 19th June 1996 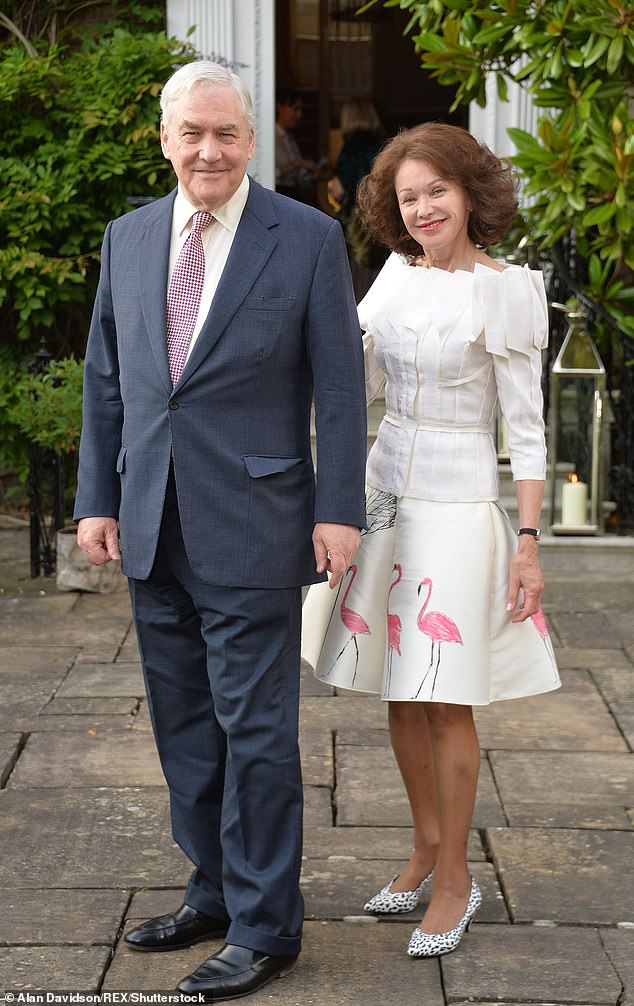 She went on to say he ‘is noble’ – adding that people ‘don’t know Conrad’ and often get the wrong impression of him.

‘I know he appears pompous, showing off his erudition, but he’s kind and generous and the least intolerant man I’ve ever met,’ she continued. ‘He’s everything to me.’

Barbara went on to say that even if she knew everything that was going to happen with the jail and colossal sums they’ve lost, she would still ‘marry him all over again.’

In previous interview, she has openly told how after their marriage, she struggled to make the transition from jobbing journalist living on ready meals to the socially cut-throat world of billionaires – noting how she often felt ‘lost’ in her husband’s social circle. 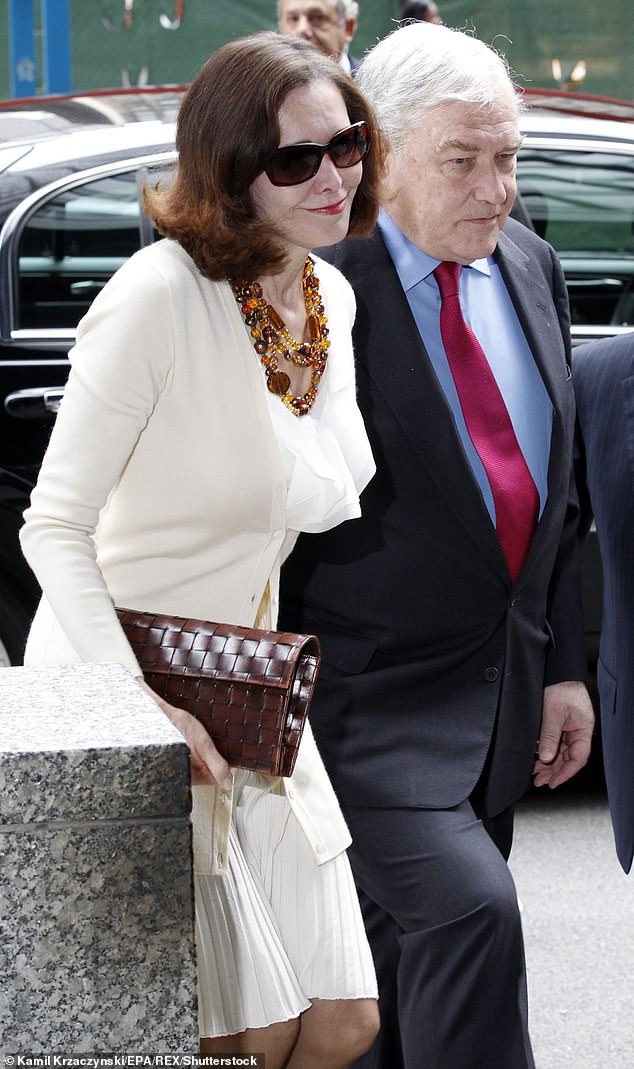 The 80-year-old went on to say how when she was with Conrad, she could ‘handle anyone’ but added it was a different story when she was separated from him.

Recalling one particular incident with Prince Philip, she noted how sometimes even her husband’s presence wasn’t enough to prevent those feelings of not fitting in.

Conrad Black’s release from the low –security Federal Correctional Institution in Miami marks the end of a saga lasting nearly a decade.

It started in 2003 when shareholders accused Black of skimming off millions of dollars from his global newspaper empire between 1999 and 2001.

He was charged, alongside his associates at Hollinger holding company, and eventually convicted of stealing $6.1 million.

They amassed the cash by handing themselves tax-free bonuses, from the selling off of their newspapers, without the consent of the firm’s board.

But, after he had served 29 months, the US Supreme Court dissolved the ‘honest services’ law that had formed the basis of his conviction.

He was released in 2010 so that his case could be re-examined, and he succeeded in overturning two of his four initial convictions.

It meant that he was responsible for de-frauding significantly less money than for what he was first convicted.

The majority of his sentence pertained to an obstruction of justice – where he is said to have removed 13 boxes from his Toronto office while under investigation.

In June 2011 he was re-sentenced and was sent back to prison with 13 months left to serve. He was eventually released five months early for good behaviour.

‘When the Duke of Edinburgh came to our house, I hid upstairs and told Conrad to tell him I was out of town,’ she said.

She also explained how after their wedding at Kensington and Chelsea Register Office, they went straight to the US ambassador’s annual summer lunch at Claridge’s, where the Queen Mother was guest of honour.

With Conrad sitting next to royalty, she remembers how she found the whole thing ‘absolutely ghastly’ because she didn’t know anyone at the table.

Conrad Black was a former newspaper baron whose media empire once included the Daily and Sunday Telegraph, The Spectator, Chicago Sunday Times, Jerusalem Post, and 500 titles across the U.S. and Canada.

A former member of the British House of Lords, he had been sentenced to more than six years in prison after his 2007 conviction in Chicago, but had then been released on bail two years later to pursue an appeal that was partially successful.

A judge reduced his sentence to three years and he returned in prison in September 2011. With time off for good behaviour, he went on to complete his sentence.

Black’s big chance to squash his convictions arose in June 2010, when the U.S. Supreme Court sharply curtailed the disputed ‘honest services’ laws that underpinned part of his case.

The 7th U.S. Circuit Court of Appeals in Chicago tossed out two of Black’s fraud convictions in 2011, citing that landmark ruling.

But it said one conviction for fraud and one for obstruction of justice were not affected by the Supreme Court’s ruling.

The fraud conviction, the judges concluded, involved Black and others taking £441,141 ($600,000) and had nothing to do with honest services: It was, they asserted, straightforward theft.

Black – who received the title of Lord Black of Crossharbour – was known for a grand lifestyle, including a $62,000 (£45,584) birthday party for his wife, a swanky apartment on Park Avenue in New York and a trip to the island of Bora Bora.

When shareholders grumbled about the cost of the Bora Bora trip, he wrote a memo saying: ‘I’m not prepared to re-enact the French revolutionary renunciation of the rights of the nobility.’

At the core of the honest services charges against Black was his strategy, starting in 1998, of selling off the bulk of the small community papers, which were published in smaller cities across the United States and Canada.

Black and other Hollinger executives received millions of dollars in payments from the companies that bought the community papers in return for promises that they would not return to compete with the new owners.

Prosecutors said the executives pocketed the money, which they said belonged to shareholders, without telling Hollinger’s board of directors.

At his resentencing hearing in 2011, several inmates wrote letters to the judge saying Black had changed their lives through lectures he gave on writing, history, economics and other subjects.

But one prison employee claimed in an affidavit that Black had arranged for inmates – ‘acting like servants’ – to iron his clothes, mop his floor and perform other chores. Another employee told her Black once insisted she address him as ‘Lord Black.’