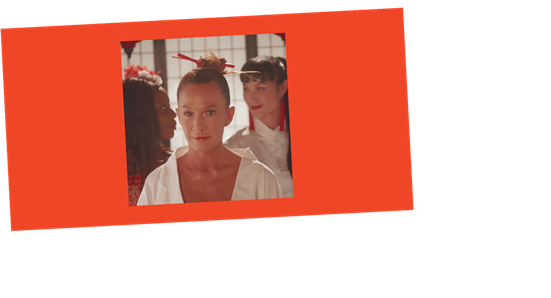 A few days ago, self-described sex and relationship coach Kim Anami uploaded a cringeworthy, racist video on her Instagram to promote her $1,197 “kung fu vagina” online course. The nearly three-minute video, directed by Shae Raven, has since been taken down and Anami’s Instagram account set to private, but it’s still up on YouTube as of this writing. The video features Anami and other women in yellowface, dressed in stereotypical (and inaccurate) Asian clothing while they sing along to a parody of Carl Douglas’s 1974 song “Kung Fu Fighting.” Instead of “kung fu fighting,” Anami changes the lyrics to sing about how everyone wants a “kung fu [va]’gina,” which “starts with a jade egg from China.”

Not only is the video highly offensive and actively perpetuating harmful stereotypes that marginalize Asian women, but many of Anami’s claims are also factually, medically incorrect. As a sex and relationships editor who specializes in health reporting and who also happens to be Chinese, I’m more than happy to break down every single line of Kim Anami’s racist, misinformed video. There’s a lot to unpack here, so I’ll do my best to make things easy to follow.

Anami dresses up in yellowface, wearing stereotypical Asian clothing with chopsticks in her hair. The use of chopsticks in hair is widely known to be a reductive caricature of Asian culture. 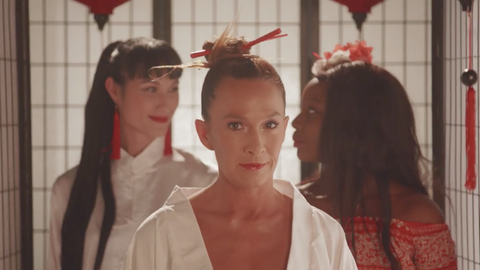 One woman even wears a fan in her hair. 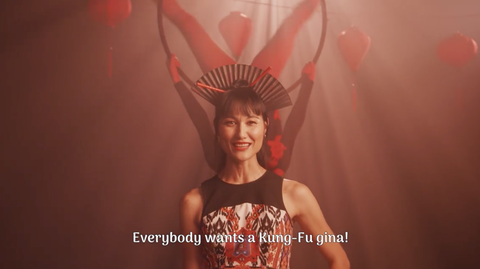 Other details include kimonos and shoji screens, which are Japanese, not Chinese. Asia is not a monolith. 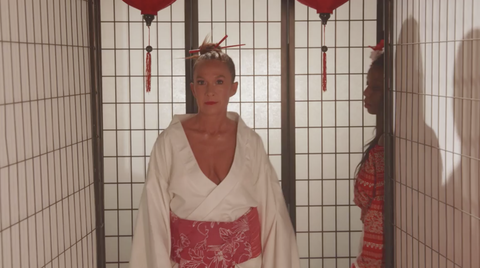 The Asian and Black women in the background are essentially used as props by Anami. Note: Casting a few women of color to sprinkle in alongside white women in yellowface does not make your music video beyond reproach!

Douglas’s song “Kung Fu Fighting” itself also features racist stereotypes and tropes within the lyrics and has been called “well-known musical Orientalism.”

Anami switches out of her kimono and Party City yellowface at the end to don a flower crown and is referred to as “Queen vagina Kim,” which reeks of the white savior trope. 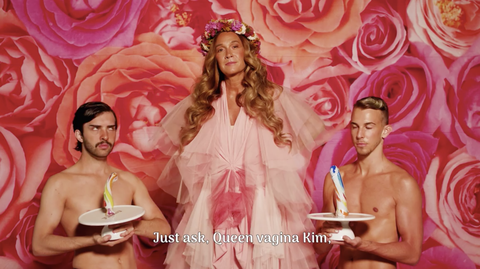 The font peddling Anami’s “KungFuVagina.com” site is in a seriously offensive style known as “wonton” font or “chopstick” or “chop suey” font. Use of this font is well documented as lazy and racist. 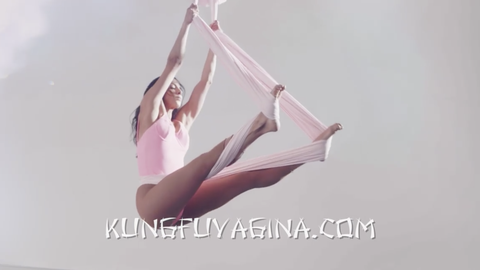 The “KungFuVagina.com” site leads to a landing page for Anami’s class where she promises to teach “ancient Taoist practices used by courtesans in the emperor’s court in China”—knowledge that she, a white woman, is willing to share with her students for the price of $1,197, or “two low payments of $647.” (Anami claims on her site that the course is actually worth $13,511.)

Let’s go through the lyrics:

No, it doesn’t. Jade eggs, which were first brought to mainstream Instagram-wellness-y culture in 2017 via Gwyneth Paltrow, have always been sold with the apocrypha of being “an ancient Chinese secret” despite Chinese people, doctors, archaeologists, and more saying this is untrue. Ob-gyn Jen Gunter and her colleague archaeologist Sarah Parchak published a paper debunking the idea of jade eggs being ancient Chinese secrets. Gunter and Parchak examined more than 5,000 Chinese jade artifacts and found that zero vaginal jade eggs existed.

Linda Fan, MD, director of the gynecology section at Yale Medicine (who also got her undergraduate degree in history from Princeton), says she, too, is unaware of the use of jade eggs for the purposes of vaginal toning.

Not only is the association of jade eggs with Chinese women incorrect, it’s also actively harmful and it plays into stereotypes of Chinese women from yellow peril. “These ideas of the Chinese woman as sex mistress come from the late 1800s,” Dr. Fan explains. “Chinese men were working on the railroads and mines in the U.S., and the Chinese women were abducted and enslaved as prostitutes.” The myth of the “Chinese seductress” with “mystical sensuality” actually comes from the need to justify the American conscience, Dr. Fan says.

“This is the sort of thing that perpetuates rape culture and allows the world to look the other way while sexual slave trade persists in Asia,” Dr. Fan notes. Anami’s claims of jade eggs being an “ancient” “Chinese” “secret” are, as Dr. Fan says, akin to the use of blackface to create caricatures that excused white behavior and violence toward Black people.

Disrespectfully, as someone who debunked jade yoni eggs a while ago, please exclude my culture from this narrative. I simply do not have the energy or mental bandwidth to keep screaming at a brick wall about this. We do not claim yoni eggs.

A “funky Thai vag” is othering and also irrelevant as hell and shows how little respect and nuance Anami has for Asian cultures, if she can’t even tell China and Thailand are different. Kung fu is a Chinese martial art.

If you think I’m reading into it too much, please let everyone refer to your vagina as “funky” and tell me how it feels. Many Asian American women grow up hearing racist comments asking about their “sideways vagina,” so this is extra not it, Kim.

The inclusion of ping-pong balls is also too on the nose to feel accidental, considering that “ping-pong” is often used as a racial slur against Asian people. Dr. Fan notes that “these images come out of the original need to mythicize and create Asian women as other” and that “there is no function that the vagina has to serve that would necessitate it to ‘shoot ping-pong balls.’”

No, it’s not. Again, Dr. Fan says this is totally appropriative.

Mastering “a jade egg from China” does not mean you never need lube or saliva. This is medically incorrect and, “really, an odd claim,” Dr. Fan notes. Your natural lubrication and wetness are not related to your vaginal strength at all, she explains. “The only link is that if a woman feels better about their body image, they may feel that they enjoy sex more, and that can increase lubrication, but ‘weight lifting’ would not help.” Lubrication can be impacted by many things, including medications.

Also, for what it’s worth, Anami shows off lifting a kettlebell from her vagina in her video, which Dr. Fan says is not healthy or safe to do, so please don’t try it. Ever.

Anami also claimed the following bullet points in her now-private Instagram caption as benefits of a “kung fu ’gina” that were possible for “every single vagina, on the daily”:

Yes, pelvic-floor physical therapy can help with incontinence, but signing up for Anami’s “Kung Fu Vagina” course—no matter how many 1:1 sessions it includes—is simply not going to be the difference standing between you and complete organ prolapse. You can always go to a physical therapist or other licensed practitioner to receive specialized treatment rather than spend $1,197 on an online class with prerecorded videos.

“What if it’s just a mistake and she didn’t mean to be racist?”

It doesn’t matter what her intention was, because it is racist. And Anami is no stranger to adopting Eastern culture when convenient: On her site, she explains that she actually chose the name “Anami” from Sanskrit, which means “unnameable one.”

Not to mention, when Dr. Gunter criticized Anami for sharing that she doesn’t get pap smears from ob-gyns because her body can tell if something is off, Anami’s response was to call Dr. Gunter “Voldemort” and “FukMe.” “FukMe,” as Anami explained, is a term she coined to describe “females utterly freaking out about absolutely nothing due to lack of phallic shapes near, in, or around their vaginas, leading to cataclysmic, psychopathic moments of intense and troubling repressed sexual tension.” I’m not sure where she got the “k,” “m,” and “e” letters from either.

Do you want to take a class on sexuality and empowerment from a woman whose defense to criticism is “they need to get laid more”? Given that most of her customers are likely women who are unhappy with their sex lives (or at the very least, looking to improve it in some pretty drastic ways), that doesn’t seem very healthy or helpful.

Reducing women to playthings only capable of fucking with zero other nuanced thought is…not how women become comfortable with their sexuality. This a pretty offensive, heteronormative, and reductive way of disagreeing with women.

Shae Raven, the director of the video, told Cosmopolitan in an email:

Anami, who has been using the term “kung fu vagina” since at least 2015, however, did not respond when contacted for comments. While she may issue a statement or apology in the future, it doesn’t change the fact that she parodied a “well-known trope of musical Orientalism” for a promotional video, causing harm to Asian women and women’s health in general in the process. Essentially, Anami made an already offensive song even more racist by further digging her heels into harmful, stereotypical tropes. How are you going to take a 47-year-old song that includes the lines “funky Billy Chin and little Sammy Chung” and make it even more offensive with a #girlboss-y layer of misogyny? Kim Anami was not listening and learning this summer!

Bottom line: Anami’s video should make everyone upset. Not only is it highly offensive to Chinese women, but her site also describes her business and classes that experts have questioned as suspect. She claims her “Kung Fu Vagina” course can help women grow their breasts, increase fertility, make more money, eradicate PMS, and turn menopause from uncomfortable to “energizing and rejuvenating.” Anyone falling for Anami’s claims is allowing a white woman (who does not seem to care for women’s health or education) to profit off of misinformation and racism.