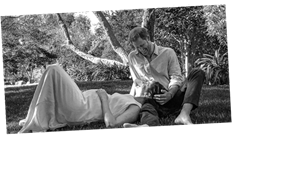 Prince Harry and Meghan Markle announced they were expecting a second child together on Valentine’s Day with a beautiful black and white photo.

The couple were pictured in their garden with Meghan resting her head in a barefoot Harry’s lap while cradling her pregnancy bump.

While the photo is stunning, there are also several secret hidden messages so let’s delve into it to see what the famous couple could also be telling us.

The photo was taken by Meghan’s long term photographer friend, Misan Harriman, who took to social media to give his take on the happy news.

“Meg, I was there at your wedding to witness this love story begin, and my friend, I am honoured to capture it grow,” he wrote.

Since the photo was released, the photographer told Vogue that the setting was chosen because it represents fertility.

“With the tree of life behind them and the garden representing fertility, life and moving forward, they didn't need any direction, because they are, and always have been, waltzing through life together as absolute soulmates," he said.

Misan also shared how Meghan reminded him of the instrumental part he played in her meeting her husband when she asked him if he would take the photo.

He added: “Meg reminded me that had I not introduced her to a mutual friend then she wouldn't have met Harry. I'm grateful for whatever small part I played.”

The couple introduced their announcement by saying: "We can confirm that Archie is going to be a big brother."

Meghan had recycled a dress that was made for her during her first pregnancy with Archie, which she has never publicly worn before.

Many see the floor-length Carolina Hererra dress as a nod to Archie and a reminder of her push toward sustainability.

Other commentators have gone as far as to say that the picture references a scene in Notting Hill.

After all, the plot is about a Hollywood actress who meets and falls in love with an English gent.

At the end of the film a pregnant Julia Roberts as Anna Scott is revealed to be pregnant, serenely laying in the lap of Hugh Grant's character Will in a very similar pose as the one used by the Sussexes.

Body language expert Judi James has analysed the photos and concluded the couple wished to communicate a “sense of simplicity” with the monochrome snap.

Judi pointed out Harry's "besotted" smile, which suggests "how keen he is to produce the message of an idyllic state in terms of happiness and lifestyle" – despite his sitting position which she said actually looks to be pretty uncomfortable.

She added: "With Harry’s bare feet turned to the camera and their very casual clothing the couple seem to want to signal a sense of simplicity in both emotions and lifestyle.”

Princess Diana announced that she was pregnant with Harry exactly 37 years previously and chose Valentine’s Day to share the happy news.

Many think selecting the same day was a deliberate choice to pay tribute to Harry’s mother.