Indigenous rockers from Arnhem Land, Korean-Australian rappers from Sydney and a female hip-hop artist from Zambia headline a diverse new generation of musicians shortlisted for the 18th Australian Music Prize.

Five of the nine acts nominated for the $30,000 album award in a shortlist announced on Tuesday are female solo artists or women-only groups, while three male acts come from a culturally and linguistically diverse (CALD) community. 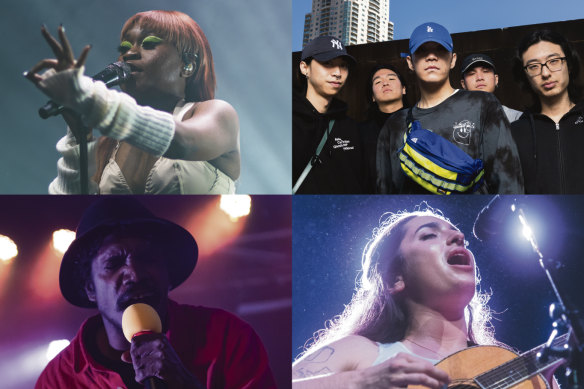 1300 rapper Jason Vuong (aka Pokari.sweat) said it was “pretty incredible” his group was part of a diverse shortlist of top Australian music when much of their nominated album Foreign Language was in Korean.

“The fact that Australia still cares … is heartwarming, really,” he said. Vuong added much of the shortlist had shone a spotlight on “things that are probably not white Australia”.

“All these artists are on the fringes of Australian music. So it’s cool to see that they’re kind of with us, because we’re definitely on the fringe ourselves.”

“All of us are really good kids. We’re not like typical rappers, spending money on diamond chains or anything like that. We [are] all really, like, Asian about it,” Vuong said.

Although the group is frugal, Vuong said winning the $30,000 prize would be “tremendously” helpful.

“[With] five mouths to feed, $30,000 would really help us continued to work hard on music. I can skip a week or two of work to do more stuff,” he said.

Camp Cope lead singer Georgia Maq, who is nominated for the group’s third album Running With the Hurricane, said the other shortlisted acts were all “terrific and well-deserved”.

“I think it’s a very good representation of Australian music and what we have to offer and how diverse it is,” she said.

Maq, who plays with Kelly-Dawn Hellmrich and drummer Sarah “Thomo” Thompson, said the $30,000 prize, if the trio won, would help them take Hellmrich’s newborn baby on tour.

Roy Kellaway, King Stingray’s bassist, said the band was “stoked” their debut album using the band’s name had made the shortlist, while Body Type, a four-piece female post-punk rock group, said they were honoured to be nominated for Everything Is Dangerous But Nothing’s Surprising.

Sampa the Great’s nomination for As Above, So Below means she could win the Australian Music Prize for a third time, cementing her status as an Australian artistic star.

Indie singer Julia Jacklin has been nominated for Pre Pleasure, Laura Jean’s folk-themed Amateurs album scored her a shortlist nod, while First Nations rapper Tasman Keith is in contention thanks to A Colour Undone. Sydney duo Party Dozen were shortlisted for The Real Work.

The Australian Music Prize winner will be announced on March 1 in Sydney.