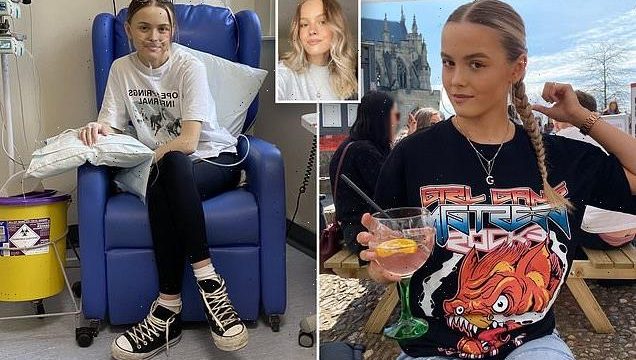 Law student, 20, who was told by doctors her ‘heartburn’ was from boozing too much is diagnosed with incurable cancer

A uni student was horrified to discover her heartburn that doctors told her was from boozing too much was actually ‘incurable’ cancer.

Georgia Ford, 20, from Stroud, Gloucestershire, said she developed a ‘choking’ cough last April and sickness soon after, but a GP just put this down to the amount of alcohol she was drinking and prescribed her stomach-lining tablets.

But over the course of several months the students symptoms, which also included weight loss and back pain, worsened.

After countless trips to the doctors, Georgia was stunned when she was eventually diagnosed with a kidney cancer called papillary renal cell carcinoma in November.

The law student says her life has been ‘turned upside down’ since receiving the heart-breaking news that the cancer had also spread to her lungs, liver, lymph nodes and bones – and that it was incurable. 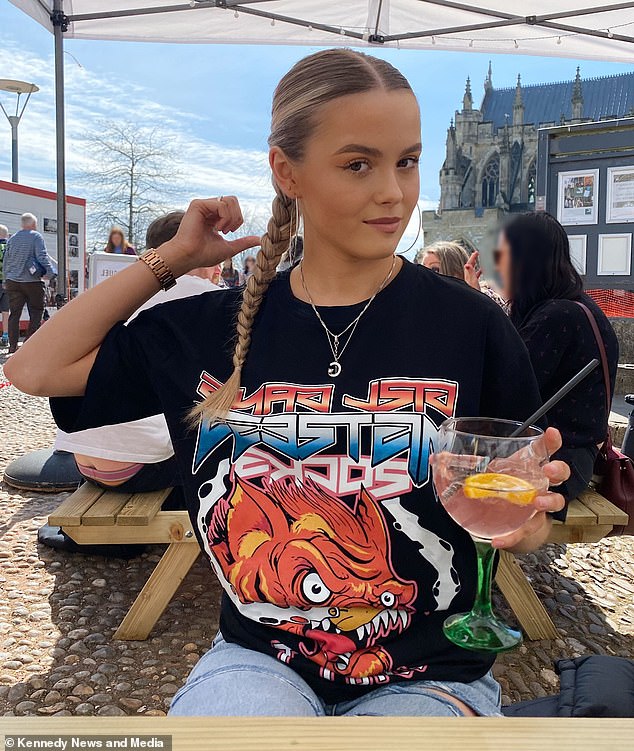 She she developed a ‘choking’ cough last April and sickness soon after, but a GP just put this down to the amount of alcohol she was drinking and prescribed her stomach-lining tablets 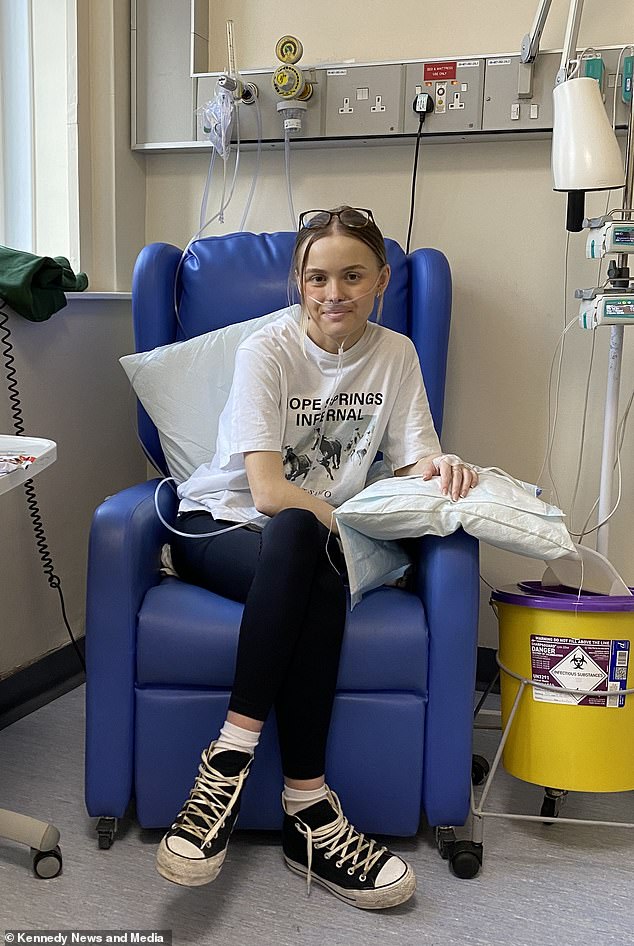 Georgia Ford, 20, from Stroud, Gloucestershire, was horrified to discover her heartburn that doctors told her was from boozing too much was actually ‘incurable’ cancer

Georgia started treatment immediately to shrink and stop the cancer from spreading and said she’s still learning to accept her ‘unbelievable’ diagnosis and now has to learn how to live with the condition.

The aspiring criminal lawyer is urging anyone dissatisfied with a doctor to push for answers – because she’ll ‘always wonder’ if hers was caught sooner, whether her prognosis might be different.

Georgia said: ‘Originally the GP said the sickness was acid reflux from the amount that I was drinking because I was a student.

‘They were like ” Do you drink a lot?D and I was like, “Yeah, obviously I do” so they put me on these stomach lining protection tablets.

‘You believe what the doctor says and I thought “I do drink a lot, and alcohol’s poison isn’t it? Maybe it is just bothering my stomach a lot”.

‘But then I came home where I’m not a big drinker and it still carried on, so I was slightly miffed as to why it wasn’t just stopping.

‘The tablets didn’t work and then it got put down to various other things. 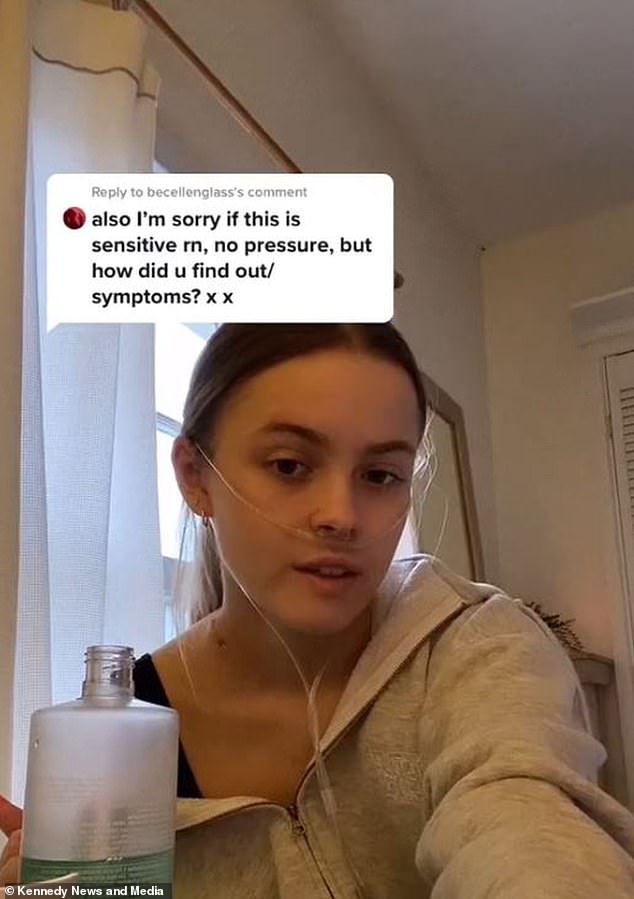 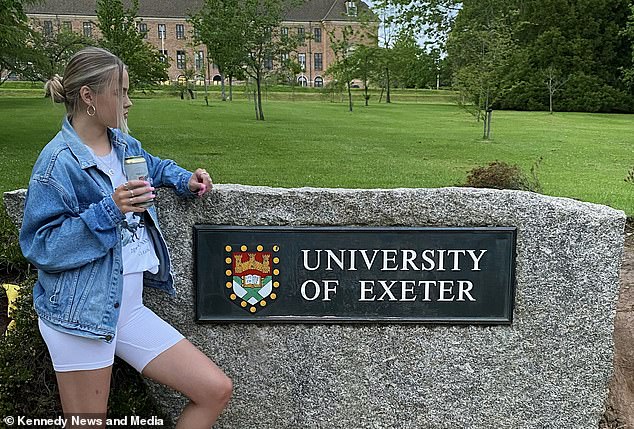 The aspiring criminal lawyer is urging anyone dissatisfied with a doctor to push for answers – as she’ll ‘always wonder’ if hers was caught sooner, whether her prognosis might be different

‘There was a time that they thought it was maybe an anxiety thing and it was more of a psychological symptom than actually a physical problem.

‘When they said anxiety could be a contributing factor I was like “I don’t consider myself to be an anxious person to begin with and also how can this all be psychological?”.

‘They basically said that this was all in my head and I wasn’t ill at all. I said, “I fail to believe that I’m having this many severe symptoms and it’s all in my head”.

‘I’m five months on from starting my treatment now, but I could be further along if I’d been diagnosed earlier. 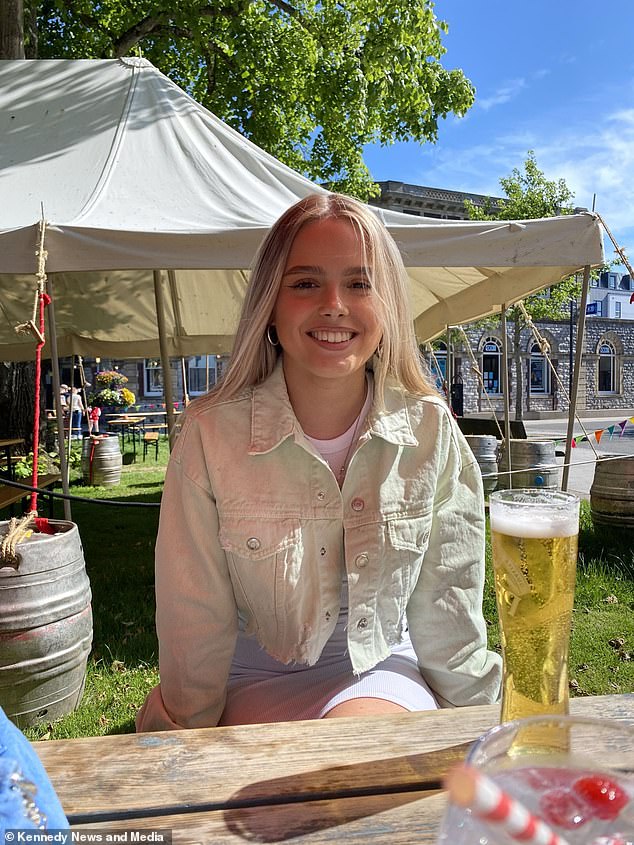 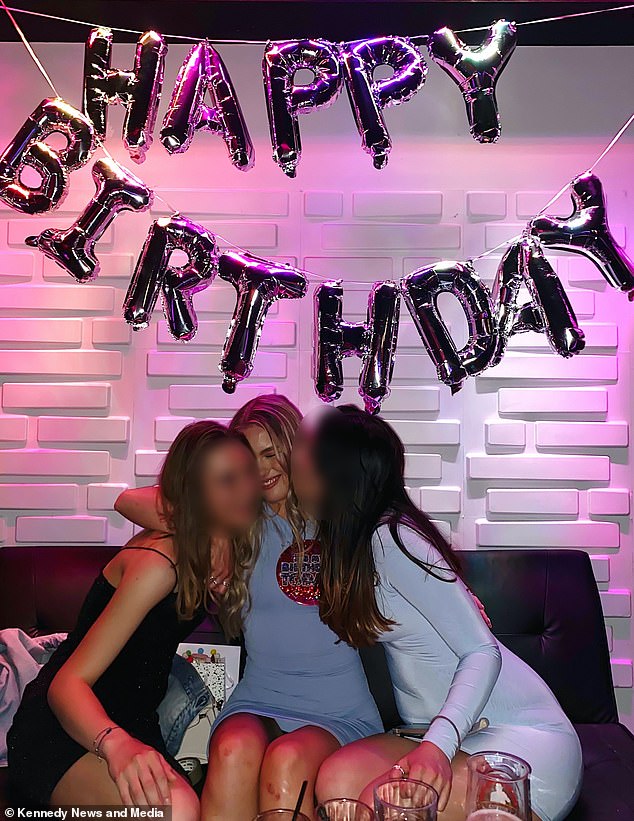 ‘I don’t know how much more ill I became in that time and whether if it had been caught a little bit earlier, my story might be a little bit different.

‘It’s one of those questions that I’ll never know, but always wonder.’

Georgia said her cough got progressively worse to the point it stopped her from being able to do things like walking or running as far as usual, and climbing stairs also became a struggle.

Her vomiting reached its worst in August which caused her to lose 10 kilos in weight, mostly between September and November.

The first time Georgia experienced back pain was back in August 2020 and was told in hospital she was experiencing muscle spasms.

The 20-year-old was eventually diagnosed with papillary renal cell carcinoma, a type of kidney cancer, last November (pictured before her diagnosis)

She experienced it again the following October along with pain in her left shoulder.

Georgia said: ‘The cough was my main symptom at first and I went to my GP about it a number of times and got told different things.

‘It was quite a choking cough, it would literally take my breath away. It wasn’t chesty or dry, it was unlike anything I’d had before really.

‘I’d been at university going out and had been around loads of people, and then when you come home and you’re all run down you just do generally do get a bit unwell.

‘So I hadn’t really thought anything of it when I came home because I thought it was just my body reacting to burning the candle at both ends for such a long time.

‘Then I went back to university [last September] and it just didn’t go away.

‘I’d coughed so much that I’d end up being sick. That’s when I started to lose weight because I wasn’t holding onto food very well.

‘My lower back pain got really bad again last October, which obviously in hindsight was my kidneys.

‘It started to hurt quite a lot when I was lying flat, it wasn’t very comfortable.

‘I put my back pain down to bad posture or sleeping positions. I’ve always slumped and sat funny.

‘I was always sat at my desk and didn’t have a great setup or the nicest chair in a student house, it’s usually some rubbish kitchen or cheap office chair.

‘You just don’t think these things are bigger than they are, you just think, “Oh well, it’s part of what it is”.’

In August Georgia started coughing up blood so dashed to A&E where they did an x-ray and ‘cloudy patches’ were detected on her lungs – but she claims she was assured it wasn’t cancer or ‘anything life-threatening’.

She was put on a three-month referral to a respiratory team but during this time she became much more unwell so booked a private appointment.

Georgia said: ‘There’s very few times in my life where I’ve been speechless and I was sat there and words just completely evaded me, I didn’t know what to say.

‘I was just so shocked. Just any hope I had of it maybe being something else, it was just the most sinking feeling to be told basically the worst-case scenario and I was just so disappointed in everything.

‘Honestly it’s not been the same since that, that one moment has literally changed my life.

‘They later said, “Look, it started in your kidney and it’s in your lungs, liver, lymph nodes and bones”.

‘I remember thinking, “OK, it’s already spread quite far away from its original site”.

‘That’s when they also told me that it was incurable.

‘It’s just like this overwhelming sadness that just fills you at the time.

‘I’ve come a long way since and I’m on my way to accepting and just learning to live with it and doing what I can within the constraints of my life now. 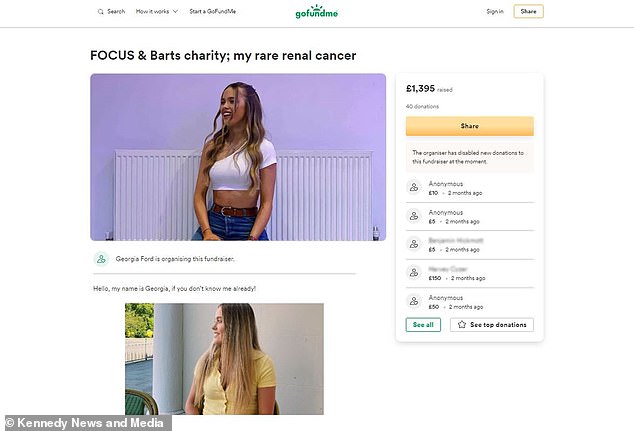 Georgia set up a GoFundMe to fundraise for two charitable organisations that are supporting her throughout her treatment and has raised over £1,300 so far

‘But at the time I’d gone from being a full university student within a few weeks to being in hospital as a cancer patient. It was just unbelievable.

The law student said she’s since started immunotherapy, which involves taking medication daily and having an intravenous drip every fortnight.

She also takes portable oxygen tanks out with her and uses an oxygen pipe at night to help her breathe comfortably.

What is Papillary Renal Cell Carcinoma?

Papillary renal cell carcinoma (PRCC) is a type of cancer that forms inside the lining of the kidney’s tubules (the very small tubes that do the filtering).

Commonly referred to as ‘renal cell cancer,’ PRCC is the second most common type of kidney cancer.

The average age of someone diagnosed with kidney cancer is 64, with most cases occurring in people 55 and older.

Some common symptoms of PRCC include: blood in the urine, pain in the side, unexplained weight loss, excessive fatigue, a lump or mass in the side and unexplained fever.

The aim of her treatment is to shrink the cancer down as much as possible to the point where she can ‘live normally’ and she hopes to return to her studies when she’s feeling well enough.

Georgia set up a GoFundMe to fundraise for two charitable organisations that are supporting her throughout her treatment and has raised over £1,300 so far.

Georgia said: ‘No matter what a doctor or any healthcare professional says you know your body better than anybody else.

‘If you think that something’s wrong and if you don’t feel that what they’re saying is right, like you deserve a scan or something more, you need to push and push.

‘You’re better off to have pushed and to know for sure that it’s not cancer than to leave it and to find out that it was.’

But she said she fet ‘pushed’ and ‘quietened’ by doctors who insisted she didn’t need an X-ray.’

Subsequently the doctor who misdiagnosed me told Georgia: ‘I’ve never seen anything like this in someone your age, I would never have expected it’.

‘That was the only excuse they’ve got,’ she said..

‘I think it’s because I’m young and in my face I still look exactly like I did when I was perfectly well.

‘I appreciate that you don’t expect these rare diseases in people like me but that’s not really the point.

‘The point is that I was coming to you with symptoms and they matched the disease, whether or not you expected it is not the point.’

You can donate to Georgia’s GoFundMe here:  https://www.gofundme.com/f/fightagainstprcc