More critical workers including teachers and nurses could be attracted to Australia if the temporary skilled migrant income threshold is lifted to $70,000 according to the Grattan Institute, as the government works to overhaul the country’s migration system.

A review of the system led by former Treasury secretary Martin Parkinson is currently under way and expected to hand a report to government by early next year. 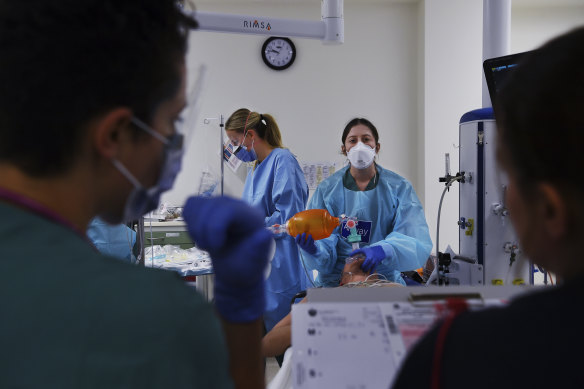 Increasing the temporary skilled migrant income threshold to $70,000 would allow us to attract critical workers, like nurses, and reduce exploitation.Credit:Kate Geraghty

As part of the migration overhaul the federal government has promised to raise the temporary skilled migration income threshold, which has remained at $53,900 since 2013. Business groups want it raised to $60,000, while the country’s peak union body believes it should be $90,000.

New analysis from the Grattan Institute confirms the current wage threshold needs to increase, as it has led to temporary migrant workers increasingly doing less skilled work, and suggested $70,000 was the optimum level.

The institute’s economic policy program director Brendan Coates called it the “Goldilocks threshold” – high enough to help prevent worker exploitation and keep wages growing, but not so high that it pushes a temporary skilled visa out of the reach of most young workers.

“It allows us to continue to sponsor workers in some of the occupations where there’s wide public support – for nurses, for teachers for allied health professionals like physiotherapists,” he said.

“If you set it above $70,000, you start to miss out on some of those people who we objectively want to have in Australia long term. Whereas if you said a below $70,000, you just massively increase the risk that you get a lot of exploitation.”

The lift would essentially return the threshold to where it would be if it had not been frozen in 2013, Coates said. But it would have repercussions for business, and would result in sponsored workers in predominantly low-wage sectors like retail and hospitality missing out.

“Changing the migration system will change the structure of some Australian industries,” Coates said.

“The employer is not just hiring them and sponsoring them as a way of getting access to relatively cheaper workers from abroad, they’re hiring them because they have valuable skills that they struggle to otherwise get in Australia.”

Coates said lifting the threshold would not only help reduce the exploitation of lower-paid workers but also be important for community perceptions.

“There’s good survey evidence to suggest that there is public concern about bringing in ‘cheap labour’ that gets exploited, to put it crudely,” Coates said. “To the extent the exploitation is occurring in Australia, that undermines public confidence in skilled migration.”

Immigration Minister Andrew Giles said in a speech at a Committee for Economic Development of Australia event last week that improving the country’s migration system was vital.

“We need a system that attracts and retains talent – a system that is simple, efficient, and complementary to the skills existing in Australia,” he said.

As part of the migration review, the Department of Home Affairs last week released a discussion paper on Australia’s migration system. It said the system needs to be overhauled to deal with critical skill shortages, emerging industries and increasing competition for workers from other countries.

“Our current migration system is complex and inflexible, lacks a strategic rationale, and no longer meets our needs,” the report said.

There are currently more than 100 individual visas, and 20 different IT systems used by the department to log and process applications, making the system difficult for both visa applicants and for immigration staff to navigate.

While the number of permanent visas is capped – at 195,000 for this financial year – temporary visas are not. The department estimated there are 1.85 million people in Australia on temporary visas who are eligible to work.