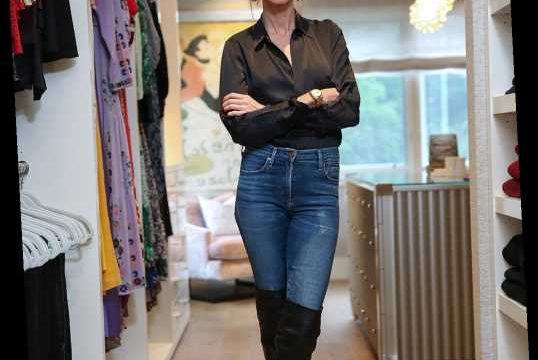 Kimberly Stewart has always been neat and tidy, but she didn't consider organizing celebrity closets professionally until last spring, when she was staying in her British rocker dad Rod Stewart's Palm Beach, Florida, home.

"During the quarantine, I couldn't stand looking at the chaos going on in my dad's pantry and kitchen so I got to work," Kimberly, 41, who lives primarily in Los Angeles with her daughter Delilah, 9, tells PEOPLE. "I posted it on my Instagram for fun, and the response and feedback were phenomenal. I got direct messages from people asking me to come do their houses. At that point, the idea came to life, and I realized that I needed to reorganize closets professionally." The result is The Realm by Kimberly Stewart, a full-service luxury home and office reorganization company, specializing in transforming spaces to maximize utility with an eye toward aesthetics. "The Realm curates any space to a person's needs," says the stylist, actress and model of her niche. "I like to create order and function but it also has to be pleasing to the eye with a personal touch that represents each client."

This urge to curate started early on for Kimberly, who is one of Rod's eight children. (Her mother, model Alana Stewart, shares Kimberly and her younger brother Sean, 40, with the musician, 76, who also has daughters Sarah Streeter, 58, Ruby Stewart, 33, and Renee Stewart, 28; and sons Liam Stewart, 26, Alastair Wallace Stewart, 15, and Aiden Stewart, 9, from other relationships.) As a child, Kimberly says, she entertained herself by arranging her Barbie dolls' clothes in color order. "Other kids thought it was funny, but I have always been extremely organized and neat," she says. For her father's clothing closet, Kimberly decided to color coordinate the whole thing. She had an advantage, she says, because she knows her father's likes and dislikes. "I loved doing my dad's closet because he loves color and patterns, which are always fun to work with," says Kimberly. "I color coordinated everything. I even separated solids and patterns."

One challenge she faced with the pop star's closet was specializing it for the subtropical weather of south Florida, and his jet-set lifestyle of living and performing around the world.  "Since this was his house in Palm Beach, I had to edit certain items to cater to warm weather," she says of his large wardrobe. "I sent my dad lots of texts and pictures throughout the process, and he was delighted with the outcome."

WATCH THIS: Rod Stewart Poses with 4 Mothers of 7 of His Children at Daughter Kimberly's Birthday Party Kimberly also reorganized the closet of her daughter Delilah, whose father is actor Benicio del Toro. Even though Delilah inherited her mom's knack for organization, Kimberly says she has trouble getting rid of things. "Delilah sometimes will wear a favorite article of clothing until it is two sizes too small, at which point mama steps in," she says with a laugh. "I like to keep it simple for kids when they are at the age where they dress themselves. I have everything for Delilah in categories like play clothes, school clothes, dress up, etc."

For all her clients — celebrity or non — Kimberly starts the project with a consultation. "I look at the space, ask a lot of questions and pick my client's brain about what it is he or she is looking for," she says. Then she makes a plan for the organizing and design aspect of the project based on the client's lifestyle. "I work very closely with all of my clients through the beginning stages to make sure that they are happy and on board," she says. One challenge is the same for all types of clients: Some coveted items are just hard to give away. (The strangest item someone was hanging onto? An old toothbrush in a client's shoe!) "I like the system of making three piles: donate, sell, keep. And I tell the client if you haven't worn it in past year, remove it from the closet and store."

"My clients always feel a great sense of relief after the purging stage and get excited about the next step," she says. Sometimes, "it just takes a little hand-holding, compromises, and when needed, some negotiation."