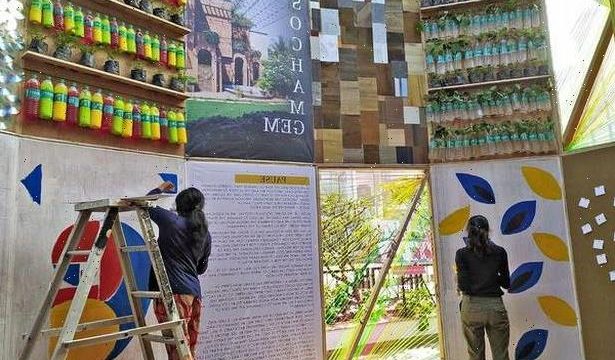 When greeted with construction waste, the first reaction is to have it removed and shifted to a dump yard. The attitude commonly seen is that the waste cannot be reused, repurposed and merely needs to be cleared out of the site. Yet, when there is paucity of funds, the same waste would be viewed differently: the pieces picked up, examined, explored to look at options of some form of use, application, where it is not outright discarded but saved up for later.

When the pandemic struck, with it came the ceasing of all activities, lending time to pause, think, and reassess situations. It also created scarcity of funding which prompted many a creative idea to surface. This scene prevailed across sections of society, across functionalities. Architecture was no less behind. Architects responded through adaptive re-use and caretaker structures wherever the need arose.

Resonating with this emerging approach to design and construction, Assocham GEM Karnataka Chapter came up with an installation made from waste at the recently concluded design festival, Designuru 3.0, hosted by the Institute of Indian Interior Designers, Bengaluru Regional Chapter.

The idea behind the installation was to celebrate design as well as examine the temporary nature of the structure and the waste that went into erecting it, and the role it plays in a public place where it is erected.

Thus, the structure had specific spaces earmarked for architect students to spread their brush and paints to come up with their own arty creations.

Spaces were created to weave lines of creativity using discarded plastic threads while another section came with a demarcated area to stack discarded plastic water bottles filled with coloured liquids and plants.

Yet another section had binned CDs pasted artistically to create a collage that caught the night lights to reflect on the onlooker, working out a magical composition of light arrangements.

No installation is complete without a space earmarked for comments. ‘Pause’ was certainly aware of this, with a separate section segmented to permit a large pin-up board as well as a writing board for the visitor to pen his or her thoughts.

“The responses received aided us to understand how the public react to such temporary installations, how waste can be effectively used in a public space to create places of interaction”, says Architect Leena Kumar, Chairperson, Assocham GEM Karnataka Chapter.