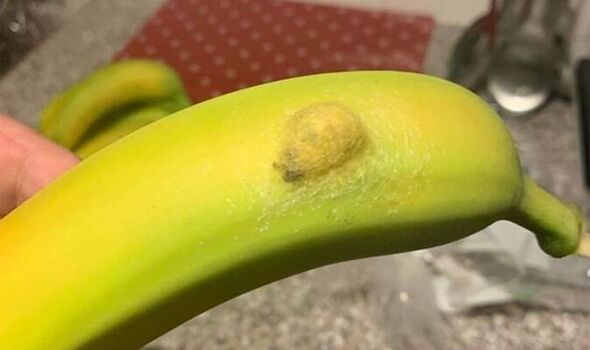 A mum was disgusted after spotting an alarming swelling in her bunch of bananas. Michelle, a mum-of-three, returned to her home after a trip to Waitrose but, while she was unpacking the groceries, she noticed a strange blister-type mark on the bananas.

The bananas, from the Waitrose Essential range, are packaged in plastic but she soon realised the mark was a spider’s nest after a spider crawled out from it. Calling on her husband, Martin, for backup, they placed the bananas in the sink as he opened it with a fork, releasing what looks like hundreds of baby spiders.

Speaking to Edinburgh Live, Michelle said: “I bought them from Waitrose, Morningside, last Monday and noticed when I took them out of the wrapper that there was something odd. I thought finding spider’s nests on shop-bought fruit was a urban myth but then I took a photo and zoomed in, you could see a spider crawling out!

She said that she was worried they were the poisonous Brazilian Wandering Spider: “My husband opened the nest out and hundreds and hundred of spiders came out. When I looked online to see what they might be, it was all horror stories sounding frightening.

“I’m so glad that I took the bananas out of the plastic, if I had left them in and my son had opened it the next day I have no doubt that all those spiders would have hatched and went everywhere – which doesn’t bare thinking about.

“I’m unsure if these were harmful or not but they have put me off buying bananas for now. I’ve had a dream that the mother was in the pack and escaped. Afterwards I felt itchy all over!”

She quickly phoned Waitrose customer service. Michelle added: “It sounded a young guy [on the phone]. He had never heard of anything like it before. He was very polite though.”

The mum-of-three explained that she chucked the fruit away and poured bleach and hot water down the sink to get rid of the baby of the spiders. Since sharing her experience with her friends, one suggested she should have put the bananas in the fridge as a way to kill the nest. Another reassured her they wouldn’t have been poisonous.

She explained that either way, she’s not wanting any bananas in her house for a while and hasn’t been back to the Waitrose store in Morningside since.

A Waitrose spokesperson said: “We’re so sorry to hear about this incident happening and we’re urgently investigating this with our supplier to make sure that this doesn’t happen again.”