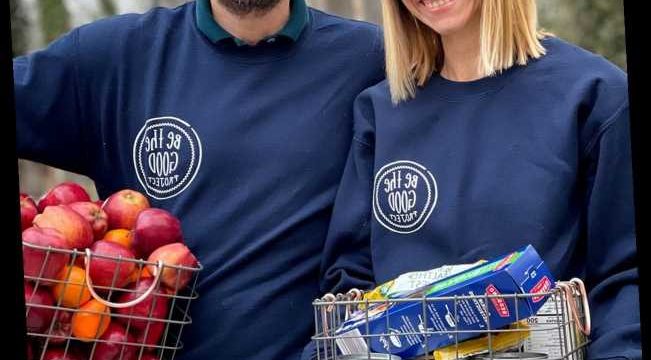 Amber and Sterling Marchand had no idea a mini food drive held in their driveway would turn into such an incredible adventure — they were just looking for a way to entertain their four young kids.

It was June when they started, the school year was over, and as the COVID-19 pandemic raged on, days spent at home became longer, more boring. The couple read a number of news stories about how the pandemic was driving a spike in food insecurity. They saw photos of families wrapped around the block waiting in line at food pantries near their home in Alexandria, Va.

Then they had an idea: They would host a food drive outside their home with their kids Foster, 9, Quinn, 7, Ford, 5, and Milo, 3. Sterling bought a big box from their local hardware store, the kids designed a sign, and Amber spread word to their neighbors, asking them to donate canned goods and non-perishable food.

"It just exploded," Amber, 39, an artist and former corporate consultant, tells PEOPLE of the food drive. "The box just kept filling and filling."

The Marchands decided they needed to do more — a few weeks later, they launched "Be The Good Project," a non-profit where the family could raise money to purchase food in bulk and donate meals to other nonprofits, food pantries and people in need. "We're seeing this combination of a historic high in terms of people needing extra help in food, and at the same time, a strain on the traditional services that have tried to meet that need in the past," Sterling, a litigation attorney at Baker Botts in Washington, D.C.  tells PEOPLE. "So we thought, 'What's a simple way our family can help out?'"

In the past eight months, Amber estimates they've delivered 32,000 pounds of food and delivered more than 52,000 sandwiches to Martha's Table, a Washington, D.C.-based non-profit that feeds people in need.

The sandwiches — packed and dropped off at the Marchands' front door by hundreds of local volunteers — tend to be of the peanut butter and jelly variety, but they also consist of different meat and cheese combinations. Some volunteers even add notes of encouragement in the lunch bags they drop off for the people who will be enjoying them.

Their kids have rallied around the cause, too, packing sandwiches, encouraging their classmates to volunteer, and tagging along on deliveries. "Our three-year-old, Milo, will always ask when he sees the food stockpiled in our kitchen, 'Is this food for us or food for neighbors?'" Amber shares. "It's taught them how to think and care about other people." The Marchands' house has become the unofficial headquarters for "Be The Good Project": there are five mini-fridges in their laundry room, two more full-size fridges in the garage to hold all the donations, plus stacks of boxes in the living room, which hold non-perishable donations.

"We're in awe," Amber says of the overwhelming flow of donations. "It restores your hope in people just to see how willing they are to help people they don't even know, to just jump in and be so generous with their time."

In addition to the weekly sandwich drop-offs, "Be The Good Project" also organizes care packages that contain a mix of items like rice, oatmeal, eggs, beans and canned fruits and vegetables. "Food is a basic necessity, it shouldn't be a source of stress for a family," Sterling says. "We want to alleviate some of the pressure and anxiety that can come from planning meals, for some people, and provide comfort and hope."

Next, the family is planning on building "little free food pantries" out of refurbished newspaper boxes in Alexandria and other nearby towns.

"Even if folks don't use them, I hope they see that their community cares about them, that even in hard times like this, we're not forgetting about one another," Sterling says. "It's a good reminder that there are always people out there who genuinely want to help their neighbor."