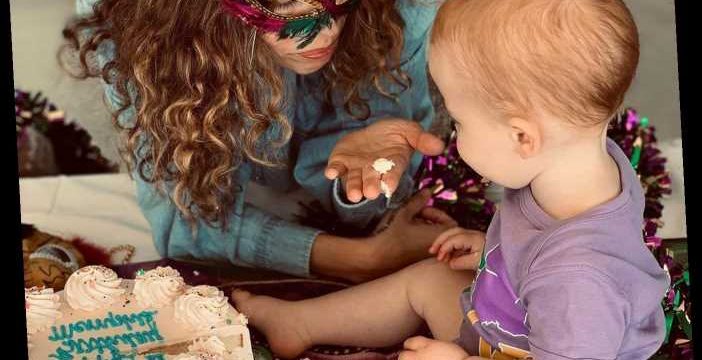 Mardi Gras festivities are looking a little different this year due to the ongoing coronavirus pandemic. But despite New Orleans Mayor LaToya Cantrell announcing the cancellation of parades, and the closure of indoor and outdoor bars, New Orleanians all over the country are still celebrating carnival season with flavorful foods — just ask poet and author Cleo Wade.

The New Orleans native, who is currently based in Los Angeles, is joining Crescent City residents in bringing the Mardi Gras celebrations to their front porches — complete with food and purple, green and gold holiday décor — for those, like herself, who aren't able to travel to the area for the annual holiday. "New Orleans is a place where you do feel really homesick because it's so distinct in its culture" Wade, 31, tells PEOPLE. "In 2020 I didn't get to go once, and that's the first time in my life that I've gone a year without going to New Orleans ever. I usually go two or three times a year. And I can't tell you how many days I cried because my daughter [Memphis] hasn't been there yet."

She continued, "[My daughter] was born in the beginning of 2020 … and it's just so hard to know that she hasn't been to New Orleans and been in my mom's kitchen yet."

For Wade, growing up in New Orleans meant growing up with flavorful Cajun-inspired cuisine, and using local food brands like Zatarain's to help spice up her traditional recipes.

And for this year's carnival season, the What the Road Said author partnered with the famed New Orleans-based brand to help to capture the spirit of the festivities, inviting people to cook classic New Orleans dishes and host their own porch parties.

Similar to New Orleans residents who have decorated their homes to look like flamboyant Mardi Gras floats this year, Wade — who is celebrating Mardi Gras at her L.A. home with her NOLA-native father — took inspiration from the parade krewes to decorate her porch.

"My mom first told me about [the house floats] and then started sending me all these photos … And when we talked about partnering with Zatarain's, we're like, 'Okay, we obviously have to turn the front of the house into a float,' " Wade explains.

"It's also been really cool because my dad literally takes a speaker and has this Mardi Gras playlist and goes out there every day and dances. For someone who has spent his entire life in the French Quarter … it was such a joyful experience to be able to give my dad his little stage too," she says of her dad, adding, "I can't know whether he's making the neighborhood really happy or driving them insane, but either way they're waving with their masks on as they walk by. We feel that we're bringing something really fun to the neighborhood."

"For me, these dishes are very special because they really are from my childhood," the poet and activist says. "I have just always been the rice girl. I always want crawfish etouffee before crawfish pasta … I'm the person who has extra rice if I'm having gumbo —  that's how I grew up."

The dishes don't just taste good, she says, but they're perfect as on-the-go Fat Tuesday meals and make for great leftovers.

"You need something that you can not only have an amazing dish that night when you eat, you also want something that's quick on a plate because you're going to parades and you're not sitting at the table eating as much," Wade says, referring to the convenience of the dishes during a typically busy Mardi Gras season. "The thing about it is that the leftovers make an insane breakfast burrito. You just wrap it — throw some eggs in there and wrap it in a tortilla in the morning, and it's literally the best hangover breakfast ever."

In addition to eating with Zatarain's, the mother of one and the food company are giving back, donating $25,000 to Culture AID NOLA — a non-profit that distributes no-barrier, stigma-free aid to underserved members of the community.

"I always say I have three parents: my mom, my dad and the City of New Orleans," Wade tells PEOPLE. "Even living in LA, I always just keep Zatarian's in my pantry so when you're having your normal dinner and you just want to quite literally spice it up, it's a nice thing to have and you do feel like you're at home."