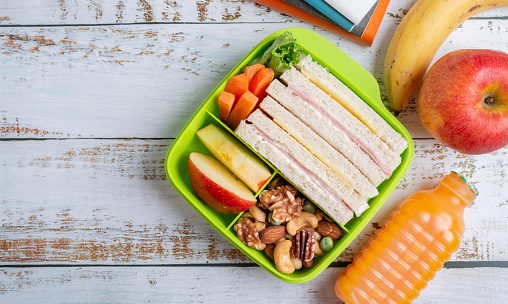 Parents could soon be taught how to pack a lunchbox, as research has found just one in 60 are healthy.

A recent study by Leeds University, which monitored 76 schools over a decade, revealed children are frequently missing out on fruit and vegetables – and are instead eating items like jam sandwiches, sausage rolls and chocolate.

In fact, it found just one in five lunch boxes contained a vegetable, while only half included fruit. And only 1.6% were deemed to be nutritious enough.

As a result, charities – such as School Food Matters – are now working with more than 100 schools, to try to encourage healthier habits – including classes for parents in how to construct a healthy packed lunch.

The study found most sandwiches are made with white bread and ham was the most common filling – but researchers have warned this has been linked to bowel cancer.

While mandatory rules for school dinners were introduced in 2006, no laws were given for packed lunches.

As a result, some schools have started teaching parents how to pack a lunchbox.

And this is something expected to continue, with more than 100 schools set to be enrolled in the programme over the next five years.

As part of this, parents will be offered a ‘menu of support’ – including workshops on ‘affordable and nutritious’ options.

Prof Jason Halford, president of the European Association for the Study of Obesity (EASO), said: ‘The quality of meal eaten at school, be they brought from home or bought at school, has been a long-standing concern, particularly in the UK.

‘However promoting more fruit and veg intake at school is difficult if this is not the diet at home.

‘Helping families to pack more healthy lunches is obviously something that should be supported but we need to understand the barriers families face doing this, particularly with the rising prices of perishable foods.

‘We also need to ensure we don’t stigma families by shaming either. Food insecurity and obesity in families are actually related issues.’