Cedric Jean-Louis takes no satisfaction in name-calling, but there came a point in the relationship of his friends Renee Smith and Pavel Aspiazu that compelled him to speak frankly. “I finally said, ‘Pavel, you’re an idiot. Renee is an awesome woman,’” he said. In 2018, Mr. Aspiazu wasn’t ready to hear it.

Ms. Smith and Mr. Aspiazu met online in November 2017 through the International Church of Christ’s dating site, Disciples Today Heart and Soul. She was living in the Bronx with her son, Rahul Smith, 20. He was a widower living with roommates in Phoenix. Ms. Smith, 49, didn’t mind meeting men whose locations made in-person dating impossible. For her, that was sort of the point: Rahul, whom she adopted from an orphanage in Delhi, India, in 2008, had become her life, leaving little room for romance.

She hadn’t always aspired to parenthood. “I came to New York wanting to be an actress,” she said. Her parents, Ralph and Elizabeth Smith, raised her and a sister, Robyn Salvin, in Cambria, N.Y. After graduating from N.Y.U. in 1993, she hunted for roles while working as a nanny and a waitress and doing temp work. By the time she turned 30, that lifestyle was getting old, but a new career path had already presented itself. “My friends were always asking me to give them haircuts,” she said. “It was something I was good at and something I liked doing.” 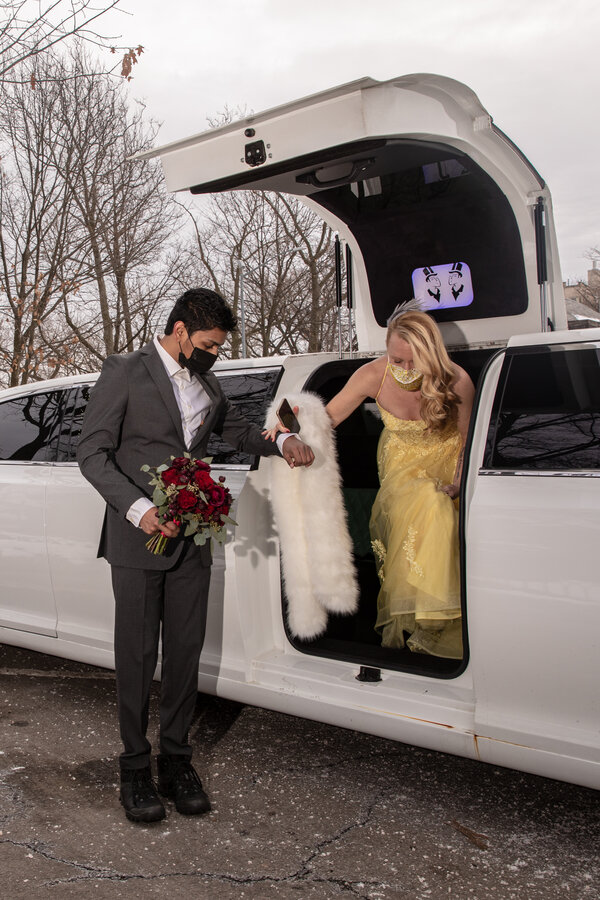 First she went to work in a salon, then at the hair products company Aveda. In 2010, she launched her own mobile hairdressing business, Renee Smith Hair Design, in a bid to take control of her schedule while raising Rahul. The little boy spoke no English when she adopted him and had experienced trauma at the orphanage.

But life with an attentive parent helped. Before he decided that distance learning wasn’t for him in 2020, he was studying engineering at the City College of New York. It was the dawning of his adulthood, after he graduated from high school in 2019, that propelled Ms. Smith back into the dating pool. For much of her late 30s and 40s, her love life had been on pause.

“My friends at that point were like, you need to put yourself out there again, not to get married but just to socialize,” she said. On the Heart and Soul site, she met churchgoing men from California, Canada and Indiana before Mr. Aspiazu’s profile snagged her attention. Part of the appeal was his widower status. Another part was his response to a question about his favorite music. “Most of the men in my age group said the White Stripes or a classic rock band. Pavel’s answer was, ‘Oh, music is glorious! Beethoven! Mozart!’” She poked him (through the site) immediately.

Mr. Aspiazu, 48, is a digital marketing specialist at V Digital Services in Phoenix. He joined the church dating site in 2017, two years after the death of his wife, Teresa Mari Aspiazu. “Teresa was this bubbly, dynamic, good-hearted gal,” he said. They met shortly after Mr. Aspiazu’s 1996 graduation from the University of Southern California, where he was a transfer student from the University of the Americas in Puebla, Mexico; he grew up in Mexico City. In 2000, he and Teresa married.

She died of linitis plastica, a type of stomach cancer. “It was difficult trying to figure out why in the world I was getting up every day,” he said, of the time after her death. “But God in his grace and his gentleness got me through each day.” Teresa’s final wishes also guided him: “She told me to keep going with my life. She said, ‘I don’t want you to be alone.’”

For him, Ms. Smith’s November 2017 poke seemed more interesting than promising. “I was looking for someone to build a relationship with,” he said. The Bronx was not exactly the construction zone he had in mind. But he couldn’t resist responding. “She had all these wonderful artistic qualities in her profile, and at the end she put something bold like, ‘I would date me.’”

Mr. Aspiazu’s first message to Ms. Smith was, “What a cool person you are! You own your own business!” she said. Her heart swelled. That day, she was doing hair for a wedding. In the middle of an up-do, she couldn’t stop grinning. “I remember thinking, Oh, Pavel reached out to me this morning! I’m going to marry him.’”

Things would get complicated first. At the start of 2018, Ms. Smith and Mr. Aspiazu’s relationship had progressed from messaging to lengthy phone calls. Though he still had misgivings about dating someone so far away, he mentioned that he would like to go to New York to take her out. But he was in no hurry.

“He said, send me your schedule for the next three months and I’ll figure it out,” she said. To her, three months felt like an eternity. She told Mr. Jean-Louis and his wife, Gloria, who live in East Harlem, about the sense of romantic urgency that had been gnawing at her since her first exchanges with Mr. Aspiazu.

“I was like, this man is so amazing, and what we’ve got is so big and so real, I don’t want to mess this up, please help me,” she said. They counseled patience. But when the three months passed, her hope fizzled. She made one last bid for his affection.

“I called Pavel and said, ‘Look, I need you to know I feel really strongly about you,’” she said. “‘I fell really hard, and I know you don’t feel the same way, but I think you should.’” Mr. Aspiazu replied honestly. He told her he was interested in someone else.

Ms. Smith, crushed, spent days fleeing to the Jean-Louis’s apartment, where she could cry without her son seeing. “I didn’t want to bring my sadness home to him,” she said. Then she hit reset on her emotions. “I thought, maybe the whole reason this thing happened with Pavel was to awake this feeling in me that I was finally ready to get married,” she said.

That September, she bought tickets for a three-day conference for singles the church was holding. The location, coincidentally, was Phoenix. After consulting with the Jean-Louises about whether she should tell Mr. Aspiazu she was coming, she messaged him. He wrote back that he would be there, too. The relationship that had led him away from her earlier that year had ended.

[Sign up for Love Letter and always get the latest in Modern Love, weddings, and relationships in the news by email.]

Hope returned to Ms. Smith, but by the time of her return flight to New York, its wings had been clipped again. At the conference, they met for breakfast and a walk. The in-person sparks that flew went in only one direction. “He made it clear that he wanted to be friends,” she said.

Mr. Aspiazu said he was feeling “gun shy” at the time. The woman he had been seeing that summer had broken his heart. He wasn’t eager to let it happen again. “Renee seemed like a lovely and fun gal, but I was not ready to let myself go gaga,” he said.

Instead of cutting ties, Ms. Smith accepted his offer to maintain the friendship. Part two of their one-sided romance began, with Ms. Smith’s heart soaring at every text and email. Mr. Jean-Louis, who had struck up his own online friendship with Mr. Aspiazu after Ms. Smith had connected them, started worrying; he knew Mr. Aspiazu wasn’t in it for romance, and couldn’t stand the thought of seeing Ms. Smith hurt again. “After a few months Cedric sat me down and said, ‘Renee, you need to stop texting him. If something is going to happen, let him lead it.’” She bit the bullet. In the spring of 2019, Ms. Smith and Mr. Aspiazu lost touch.

When he resurfaced that summer, it was to resurrect the fallen friendship. “I missed her,” he said. He had news, too. Since 2000, Mr. Aspiazu had been a Mexican citizen with permanent U.S. resident status; in 2018 he started the process of becoming an American citizen. “After Teresa died I kind of put the citizenship idea on the back burner,” he said. In November 2019, when he told Ms. Smith it had been granted, her response was instant.

“I told him, ‘You’ve had a lot happen to you in your life,’” she said. “‘I’m coming out there to celebrate with you.’ He had become one of my best friends by then.” In Phoenix, they went to bars and parks and restaurants. Somewhere in between, Mr. Aspiazu’s feelings turned a corner.

“When she left I was like, She’s my friend, but I really want to kiss her now,” he said. “We just had so much fun.” Mr. Jean-Louis had already called him an idiot on the phone. He was starting to realize that, when it came to Ms. Smith, he might have been.

“I felt like, this girl is money. I’ve got to get serious with her,” he said. The pandemic didn’t slow him down. Though they couldn’t see each other in person for months, by summer, they were a couple. On July 4, Mr. Aspiazu flew to New York to meet Rahul.

“I was nervous about having a conversation with him, but I said, ‘Rahul, I want to get serious with your mom, and I want you to know I have clear intentions,’” he said. “Rahul’s response was, ‘Just don’t hurt my mom.’”

He returned to New York at Christmastime and proposed Dec. 19 at the Cloisters, a museum in Manhattan’s Fort Tryon Park. For Ms. Smith, it was a dream come true. “He held out this ring to me, and before he could even say anything I said, ‘I want to be your wife,’” Ms. Smith said. “I felt so happy and grateful.”

On Feb. 14, Ms. Smith and Mr. Aspiazu returned to the park to marry. Ms. Smith, in a backless yellow chiffon gown under a winter white wrap, was escorted down a park walkway by Rahul; Mr. Aspiazu, wearing a dark suit with a yellow tie, awaited them with Mr. Jean-Louis, their officiant. Ms. Salvin, Ms. Jean-Louis and another friend, Eliana Vera, were the only in-person guests, but more than 200 well wishers, including Mr. Aspiazu’s parents, Juan Aspiazu and Julieta Garcia, who live in Mexico City, watched with anticipation via livestream.

Before Mr. Jean-Louis, a Universal Life Church minister, cut to the legal part of the ceremony — the day was below freezing, so he kept his remarks brief — he recalled a Valentine’s Day years before.

“Pavel hadn’t seen the light yet, and the valentine Renee wanted was hundreds of miles away,” he said. When he pronounced them married, they lingered over a kiss, holding each other close.

New Horizons Ms. Smith and her son will relocate to Phoenix this month. Ms. Smith plans to find work at a salon rather than continue her mobile service, and Rahul will decide where he wants to finish college. “He wants some time to find his footing there first,” Ms. Smith said.

Behind the Scenes The New York wedding planning company Modern Rebel orchestrated the wedding, with touches including the entertainers Winston and CJay Philip, who provided musical accompaniment and toasted the couple post-wedding. “Be blessed, and be a blessing,” they encouraged online guests before signing off.

Brrrr After their subfreezing wedding, the couple took off for a two-week honeymoon in Maine.