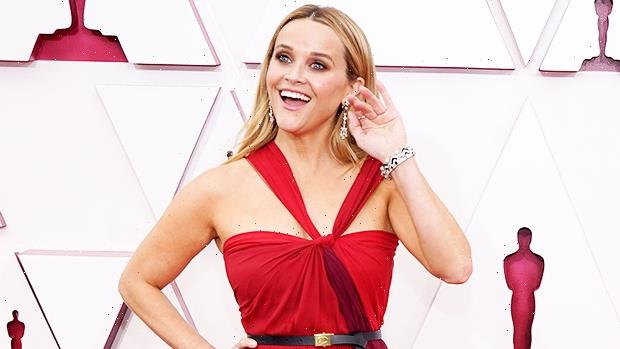 Reese Witherspoon walked down the 2021 Oscars red carpet in a Christian Dior dress, after teasing that this year’s award show is ‘so incredibly different.’

Reese Witherspoon showed up to the 2021 Oscars on April 25, ready to present! Before taking to the stage later tonight, however, the Legally Blonde star, 45, first made her entrance at the award show in a Christian Dior dress that matched the color of its red carpet. A stripe of burgundy ran down the gown, which was cinched at the waist with a black belt adorned with a golden frame.

Reese was very excited about this big night. Just hours before making her red carpet entrance, she was at home chilling in her Oscars hoodie. The actress even took a selfie in the embroidered jacket, as you can see below.

The Big Little Lies actress made sure to get fans just as excited about the Oscars. “I hope you’re ready to watch because I went to rehearsals yesterday and it’s so incredibly different,” she teased in a video on her Instagram Story, and later added, “I’m excited to be going somewhere in person.” For the past year, the COVID-19 pandemic has essentially shut down all of Hollywood’s major events (or drastically changed how they usually operate), so Reese’s enthusiasm for tonight was understandable!

Reese then shared a video of herself sitting down in a glam chair, while her beauty team to make her red carpet-ready. Celebrity hairstylist Lona Maria Vigi was on curling duty, and A-list manicurist Thuy Nguyen could be seen prepping Reese’s nails. Meanwhile, film and television makeup artist Tracey Levy could be seen swiping Reese’s face with a spoon-shaped foundation brush.

While Reese was attending the Oscars as a presenter, she has been busy with acting herself. She was seen back on the set of her Apple TV+ series The Morning Show, along with co-star Jennifer Aniston, in Los Angeles on March 10. The show premiered in Nov. 2019 and has been met with much fanfare. Reese (along with Jen) even earned a nomination for “Best Actress – Television Series Drama” from the Golden Globe Awards for her role in 2020.