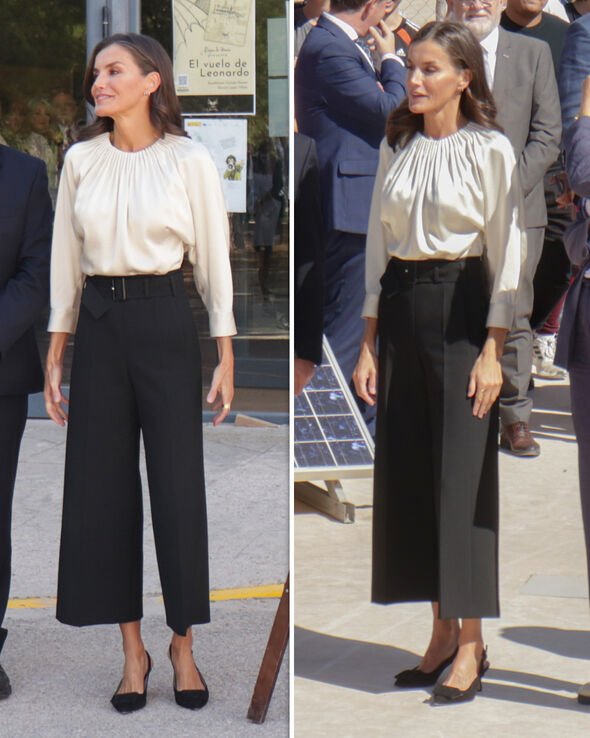 Queen Letizia presided over the opening of this year’s Vocational Training course at the Centro Integrado de Formacion Profesional (CIFP) Aguas Nuevas, yesterday, September 28, in Albacete. During the inauguration, the President of Castilla-La Mancha and the Spanish Queen attended a brief meeting with representatives of the teaching staff, employers, collaborators of the centre, students and union representatives.

Queen Letizia looked sophisticated in a black and white ensemble that seemed business-like and professional.

She wore a new Adolfo Dominguez ruffled collar blouse in white, which she had never been seen in before.

The blouse is available in both red and white on the Spanish designer’s website, retailing for €205, or £183.

It is made form polysester and has buttons on the sleeve cuffs, which are described by Adolofo Dominguez as “Japanese sleeves”. 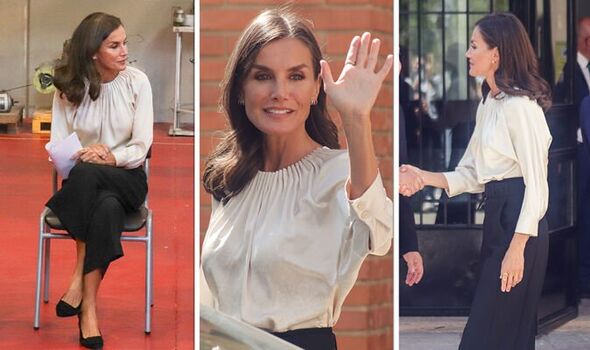 Letizia had tucked the blouse into a pair of smart, black trousers – they are a pair she wears often and are called the Trimie Wide-Leg Crop Trousers in Black by Hugo Boss.

The royal combined the trousers with a large black belt and a pair of suede slingback heels.

As for jewellery, Letizia accessorised with a pair of three-hooped earrings in gold and studded with tiny diamonds.

These were the Shewel Triple Hoops by jewellers Gold and Roses.

She also donned her favourite oval-shaped ring, which the royal is rarely seen without.

Letizia’s hair, though, almost stood out more than her outfit: eagle-eyed royals fans spotted silver locks amongst the brown. 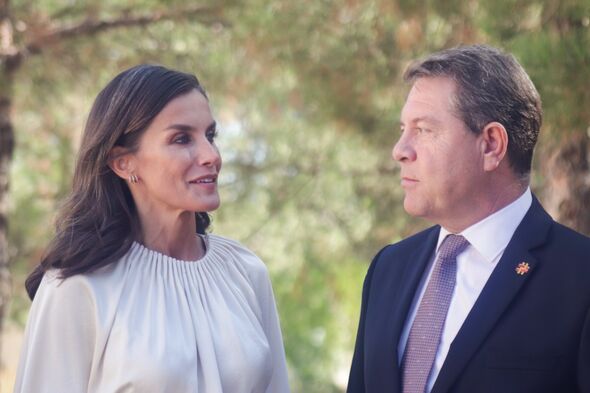 Letizia seemed to have allowed her silver roots to come through, and fans were impressed.

Some fans commented on the royal’s outfit too, with Catherine Duncan saying: “Beautiful look, going to copy this, on a budget though.” 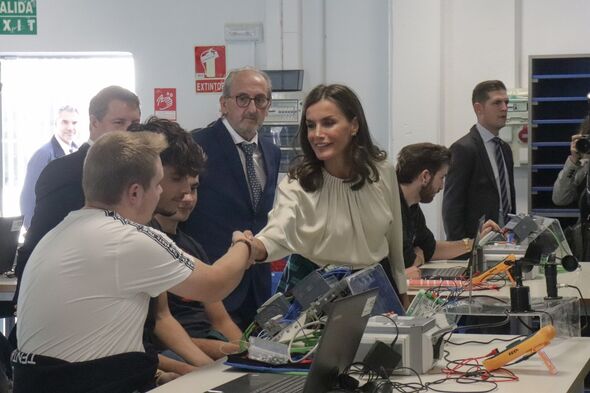 However, some fans were unimpressed – and made it clear. User @ghada_talaat315 wrote: “I don’t like the trousers on her.”

User @heladyteachersybill said: “Sleeves and trousers look to me like having been washed too hot and thus had shrunken…although black and white is usually a nice to-go option, I am really not a fan of this look.”

User @mydocuments_ commented: “I know Queen Letizia is tiny, but is the belt wrapped all the way around? I feel like her dresser could have easily shortened that.”

Rachel Hannam wrote: “Love those culottes on her – she can wear them well as she has such lovely slender ankles. Also loving the shoes. I prefer that heel height. It’s the blouse I’m not too keen about. Something isn’t quite right with it in my opinion.”