Rory Parnell Mooney, who showed with Fashion East/MEN for three seasons and hosted a stand-alone presentation back in 2015-16, is returning to the London Fashion Week official calendar via the British Fashion Council’s DiscoveryLAB program with a new direction.

Now simply called Parnell Mooney, the brand is all about confidence, as it “came about from getting a new studio space, and creating work without a deadline,” and “embraces fitting more, thinking about the body and the wider context of how the clothes are worn.”

The fall 2021 collection is “a dragnet of everything” he has been watching or thinking about for the last six months.

“There’s an element in the collection about power dressing but also escapism and the idea of dressing up for a place that we currently can’t access like a party/office/nightclub, like even the ritual of getting dressed in work clothes feels strange, so I wanted to try to capture that feeling of confidence and sex appeal when someone has gotten ready and feels great about themselves,” he said.

During his break, the designer spent a few years teaching at London’s fashion schools and started to think about what his brand really is about.

“I think I spent that time growing up, I went straight from school to university to the MA at Saint Martin’s to showing with Fashion East, I just hadn’t really stopped in years,” the Irish designer said.

“Lockdown and restrictions have actually kind of allowed me a new kind of perspective on what a show is, or what it needs to be. It also gives me the control of saying this is exactly how I want to do it and I can just get to work on making that happen, the limitations provide a structure to work within,” he added. 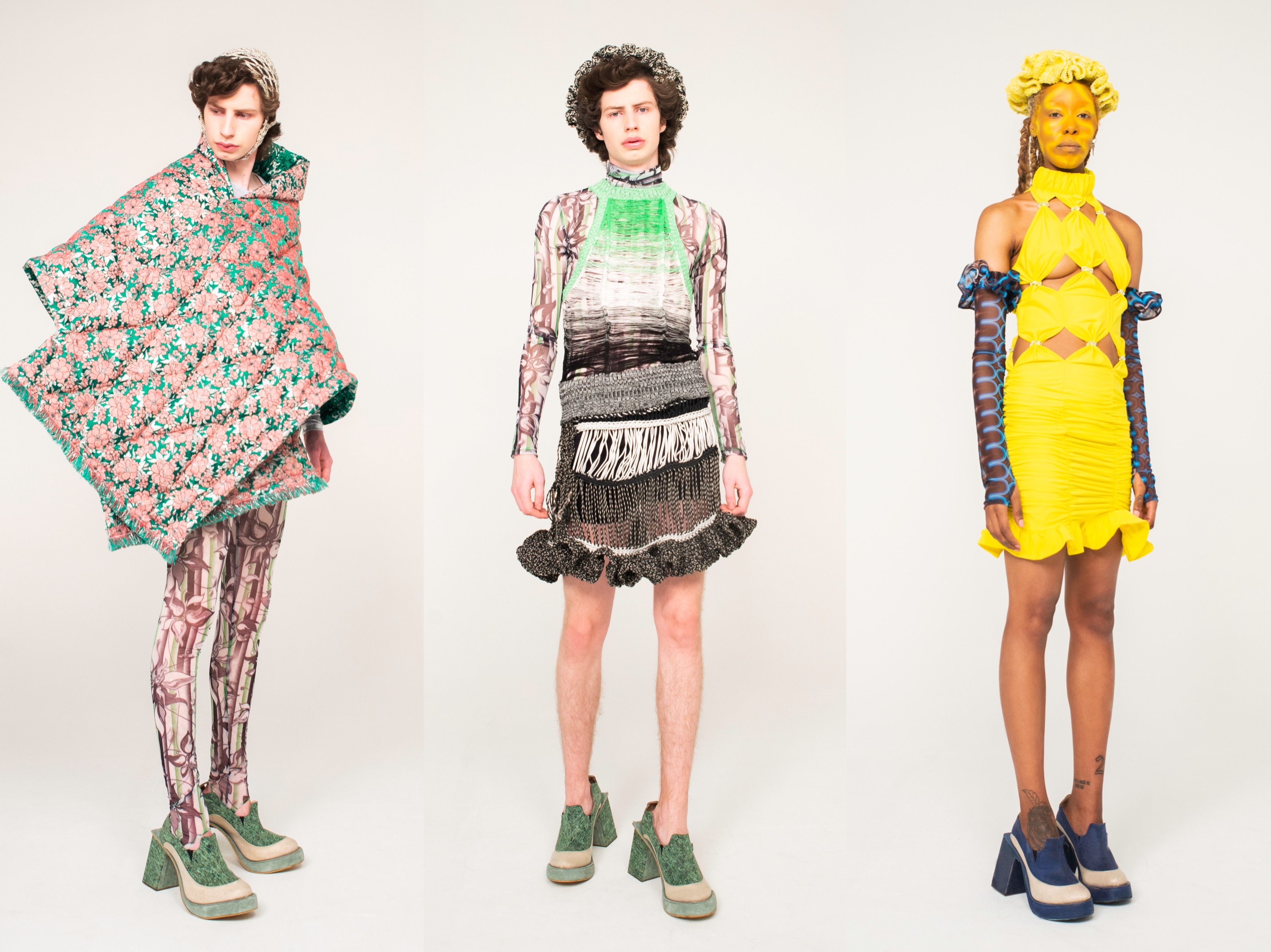 Swedish designer Linus Leonardsson will be making his London Fashion Week debut Friday. His fall 2021 collection, “Let There Be Light” — the fourth one since his graduation from the Royal Academy of Fine Arts Antwerp — offers an escape from the harsh reality.

The result is a gender-bending and eco-conscious collection with a touch of Space Age nostalgia that features playful puffer jackets and bodysuits made from upcycled floral bedsheets, a giant pussy bow bra top, and loosely crocheted deadstock yarn tops and skirts, priced between 200 to 500 pounds.

Leonardsson launched his label in Russia. He was invited by the Russian Fashion Council to show in Moscow in 2019. The show was met with extreme reactions.

“The feedback I received from locals was either overwhelmingly positive, or they did not get it at all. But truth be told I’m very happy with this reaction. In my view, fashion needs to push forward and try out new ideas, and for that to happen you need an open discussion where both love and distaste are shared,” he said.

London appears to be a much more suitable place for the brand, and that’s why he has moved the studio here.

Joining LFW’s digital showcase, which is open to all, means his label, which “looks beyond national borders and into a digital realm where everything is possible,” not only can reach industry professionals, but also “the curious fashion lovers at home in need of some fantasy and flair in these dark times.” 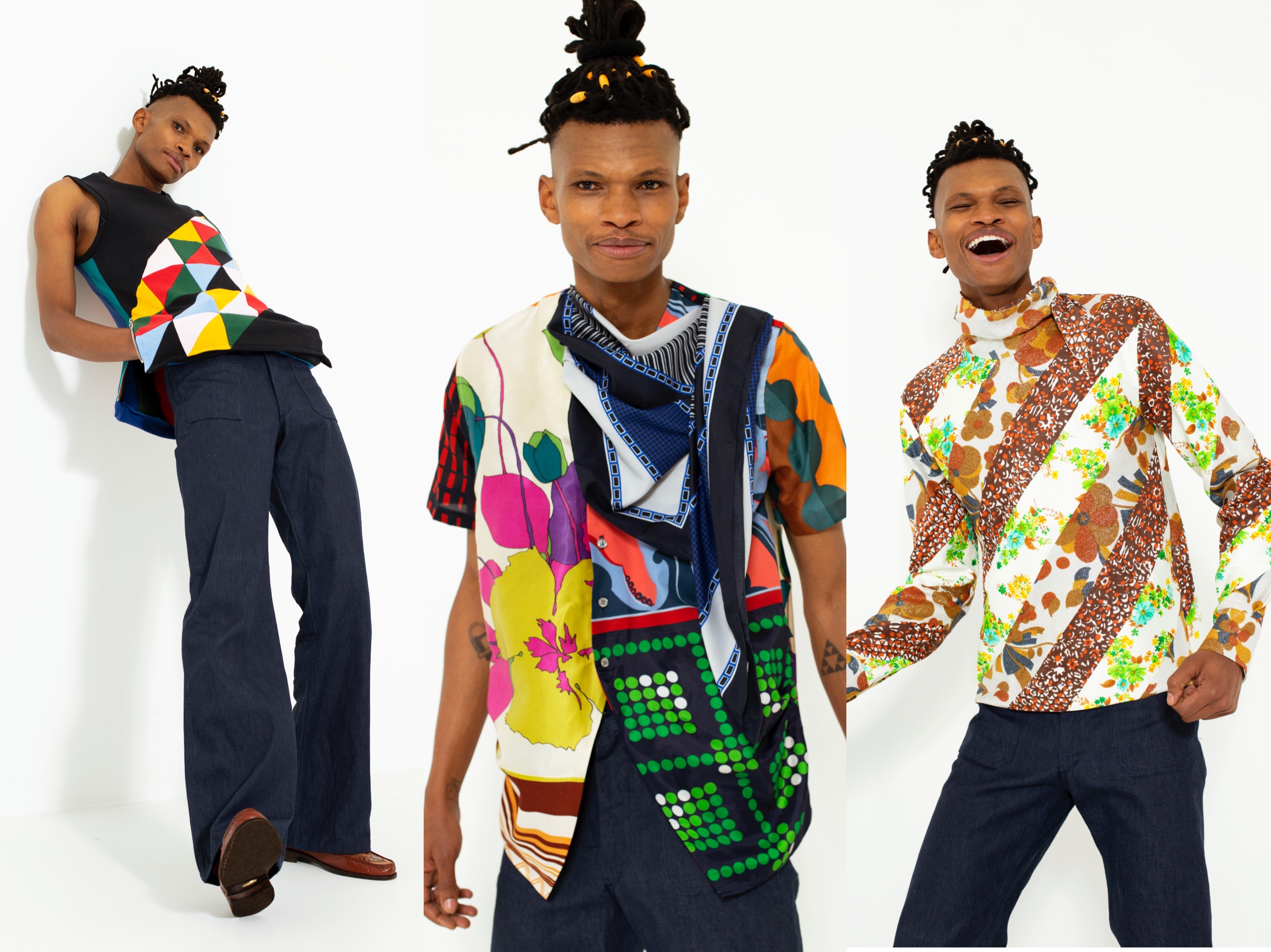 On Saturday, Nick Palmer will present his first collection since graduating from Central Saint Martins MA fashion in 2018 with DiscoveryLAB.

The collection is done with a repurposing approach. The idea of giving old garments a new life through innovative textile techniques and contemporary design brings a sense of optimism.

Faced with national lockdowns in the U.K., Palmer turned to eBay and vintage wholesale suppliers to source the materials.

As a result, each item in the collection is unique, whether they are colorful shirts and tops made of repurposed vintage scarves from the Seventies or bias-striped tops made from cut-up vintage dresses from the same period.

Born and raised in Indiana, Palmer moved to New York in 2008 to study at The New School’s Parsons School of Design. Before moving to London, he worked at Ralph Lauren, Perry Ellis, John Varvatos, and Coach under Stuart Vevers. 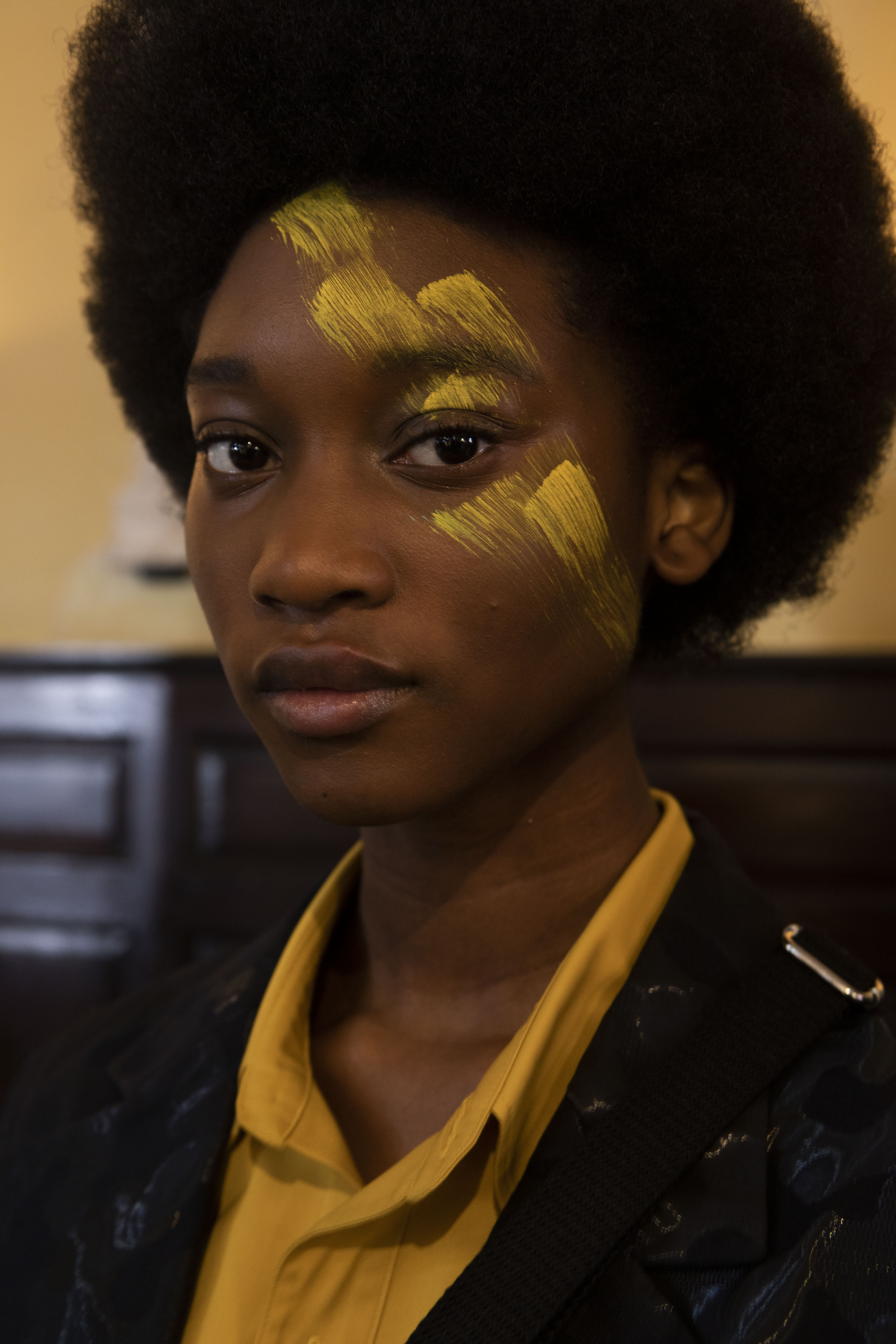 Meaning “having an edge” in Latin, Labrum London was founded in 2014 by Foday Dumbuya with an aim to make practical, honest clothing that combines West African and British heritage. The brand will show on LFW’s official calendar for the first time on Friday.

Styled by Dazed & Confused’s newly appointed editor in chief Ib Kamara, the fall 2021 collection is a celebration of Olaudah Equiano, who supported the British abolitionist movement, and the heroes of “St. Giles Blackbirds,” a section of the black community comprising sailors, soldiers and former slaves that settled in England in the late 18th century within the St. Giles-in-the-fields area of London.

Featuring British tailoring classics and African prints, or somewhere in between, standout pieces include a trenchcoat that pays tribute to Equiano’s personal style, combining ruffled sleeves with a British raglan cut, and oversize shirts that draw inspiration from the agbada outfit.

“I want to leave a legacy for people in West Africa where in 50 years or so they will look at Labrum as a reference point. When it comes to the garments themselves, I want to make designs that stand the test of time. Not necessarily in a ‘timeless’ style sense but more in terms of the longevity of the garment,” Dumbuya said.

“Fundamentally, Labrum tells stories that have an impact on people’s lives,” he added. 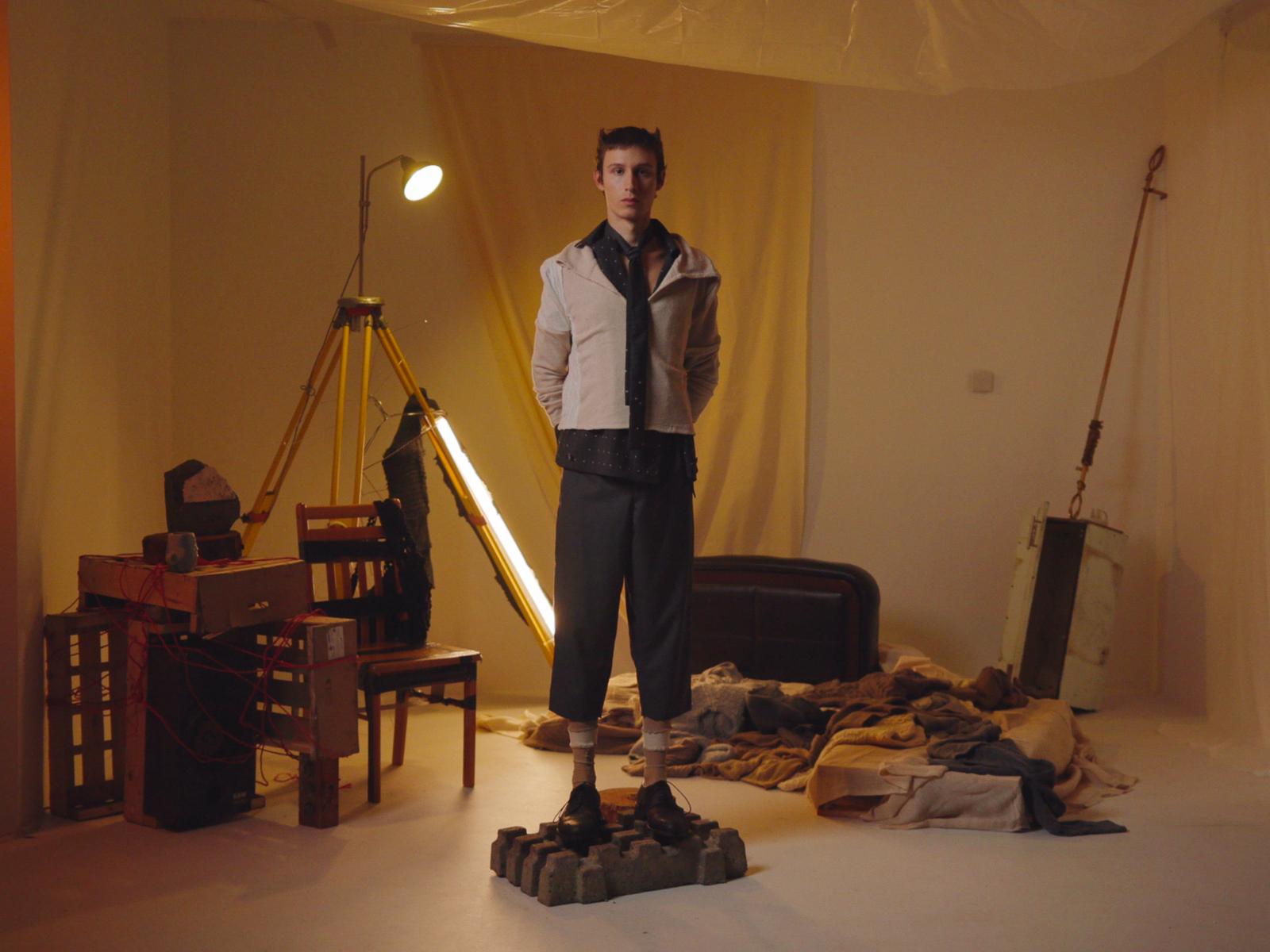 A look from Daniel Crabtree. Courtesy

Also from Central Saint Martins, Daniel Crabtree will release his men’s wear collection on Monday via a three-minute video, featuring eight looks that demonstrate the designer’s focus on “craftsmanship, heritage, and repurposing and reclaiming of pre-worn garments.”

Crabtree said his clothes are made for “free-thinkers,” who would appreciate progressive British tailoring in unexpected fits, proportions and materials that are “honest and effortless, rejecting the unsustainable appetite for the throwaway and the immediate, designed to endure.”

Since graduation, Crabtree has been slowly developing the label, showcasing with support from Peroni at LFW’s BFC showrooms in February 2019, and independently at Paris Men’s Fashion Week in January 2020, while teaching at the undergraduate level and doing consultancy work.

While the bigger environment might favor established, bigger brands in a time of upheaval and significant change, Crabtree thinks people will respond to a point of view regardless of what might be going on around them. As a small brand, it is also in some ways easier to find solutions and navigate challenges in a more resilient and resourceful way.