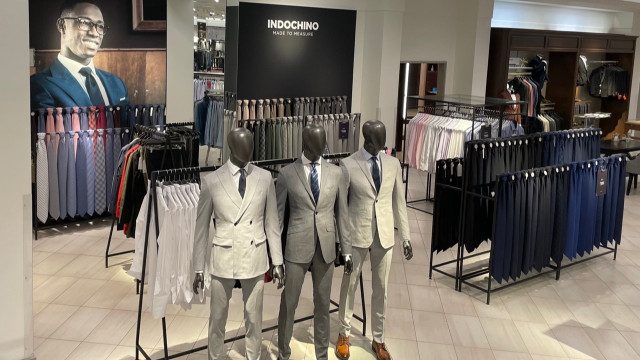 Nordstrom is plunging full-steam ahead with its pre-pandemic plans to partner with Indochino, the Vancouver-based men’s made-to-measure company.

The Seattle-based retailer is adding 21 Indochino shops in its stores around the country that will offer personalized suits, shirts, chinos and outerwear at an affordable price point.  As part of the deal, Nordstrom will also offer complimentary alterations to any Indochino customer — even those who did not purchase their items at a Nordstrom store — in all of the in-store shops. By the end of July, Indochino will have 58 of its own showrooms in the U.S. and Canada.

Drew Green, president and chief executive officer of Indochino, said conversations with Nordstrom began nearly four years ago and the two had decided to move ahead with the shop installation concept just as the pandemic forced stores to close. “It was almost a year since we were supposed to launch, but we pulled back because of the pandemic,” Green said.

In recent weeks, Nordstrom quietly opened 10 in-store shops at its stores and will now add another 11. The new crop of shops, which average around 400 square feet, will open between June 25 and July 2.

Green said he “really admires Nordstrom,” calling the company “a historic retail brand that doesn’t get enough credit for being innovative. As one of the world’s leading fashion retailers, Nordstrom is known for offering an unparalleled level of service and we share this passion. Together, we’re enabling more individuals to showcase their personal style through custom clothing that delivers high value by combining a premium customer experience, high-quality product and accessible price.”

Indochino suits retail starting at $429 while shirts and chinos start at $79. In its own showrooms, the company offers some 180-plus suit choices along with different options for lapels, buttons, pockets, linings and monogramming — the same that are offered at Nordstrom. “Our entire inventory is virtual,” he said. In addition, Indochino’s two- to three-week turnaround for a suit in its stores will also be offered at Nordstrom. “The experience will be exactly the same as our stand-alone stores,” Green said.

Shea Jensen, executive vice president and general merchandise manager of men’s and women’s ready-to-wear at Nordstrom, added: “We have long admired Indochino as a leader in made-to-measure suiting and apparel and we are excited to bring the Nordstrom customer a new bespoke experience in our stores. As we continue to expand our offering within our men’s category, we are always thinking about how we can best serve a wide range of customers. Through this partnership we will provide an approachable and convenient way to shop whether it be for work, special occasions, or everyday wardrobe essentials.”

In a telephone interview, she said Nordstrom sees an opportunity to better serve its male customers by partnering with Indochino, which is “a well-known brand with relevance for the younger consumer. The Millennial population is the largest in the U.S. today and that’s the centerpiece of the Indochino customer base.”

Nordstrom will continue to offer made-to-measure with other brands within its men’s portfolio, Jensen said, but the Indochino option is specifically targeted to a younger man.

Since the shops had a soft opening, Jensen said early results are promising, especially since the dress portion of the men’s business has been rebounding this year with the return of events and weddings, and Indochino’s offering fills that demand.

Green anticipates that the partnership launching this month will be a long-lasting one. “We see the opportunity to be partners for decades,” he said. And while he didn’t venture a guess on how many other shops may open, he believes that the post-pandemic period will be strong for dressy men’s wear as weddings and other events are rescheduled. “I feel like it’s going to be the Roaring Twenties,” he said. “Formalwear will be back and we’re looking forward to continuing our partnership with Nordstrom in the future.”

Jensen agreed, saying that the partnership allows Nordstrom to avoid the “inherent risk” of holding inventory in its stores while providing younger men the experience of creating their own wardrobes.