A MORTIFIED mum is warning parents to check their kids' ears after pulling out a four-inch 'WORM' that had been 'eating' her son's brain – only to realise it was tape he'd stuffed in a week earlier.

Gemma Tyson 'felt sick' as she used tweezers to pull out a long, sticky mass that 'just kept coming and coming' and unravelled as it emerged from then eight-year-old Ashton Horsfield's ear after he had complained of a mysterious itch. 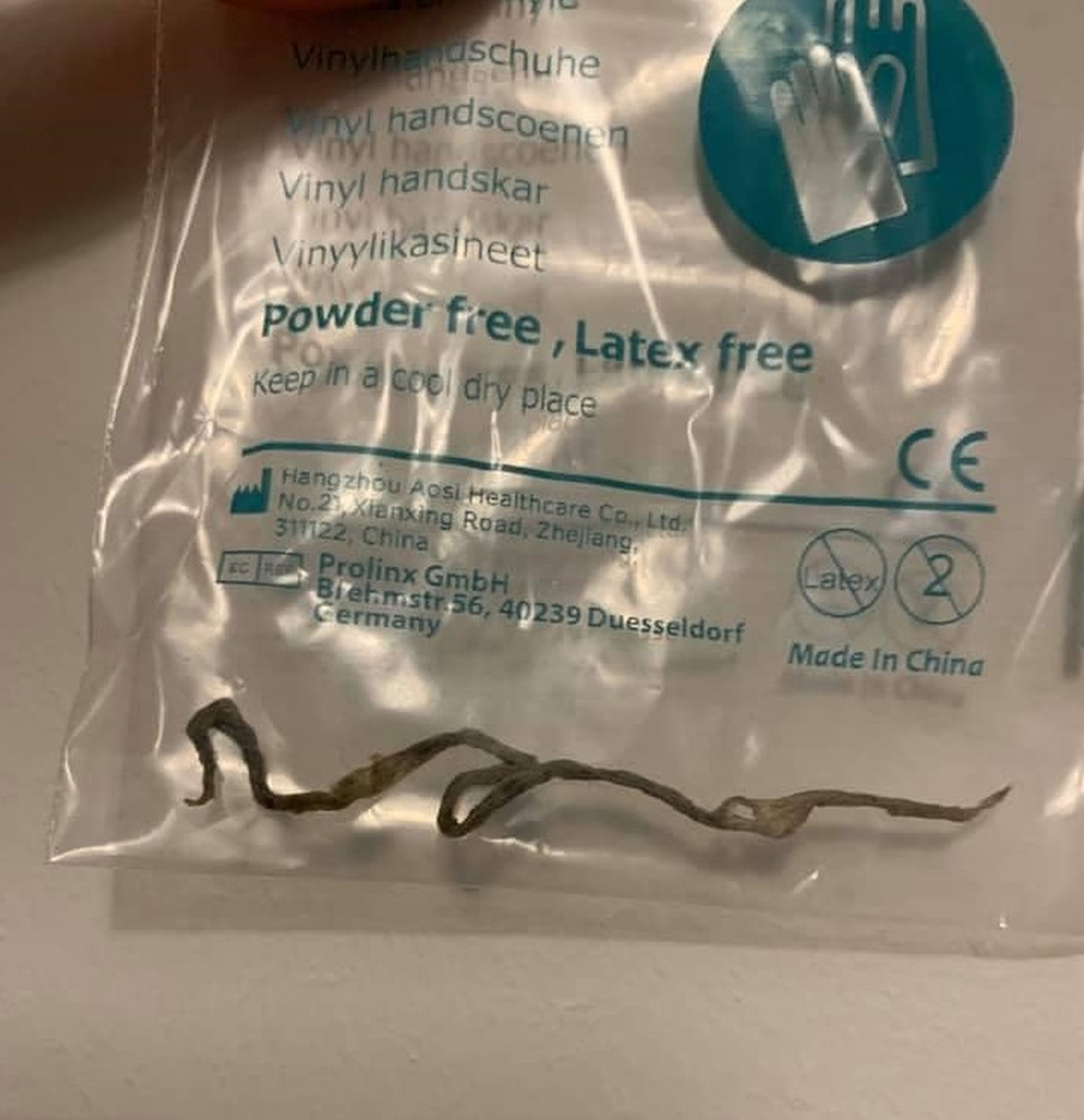 After a frantic web search, the horrified mum became convinced he had 'worms that were eating his brain' and rushed her son to an emergency doctor appointment, who took the 'creature' for testing.

It was only after returning home and waiting to hear back on the test results, that Ashton revealed he'd stuffed a ball of micropore surgical tape into his ear a week earlier.

Despite being relieved her 'living nightmare' was over, 38-year-old Gemma insists her mischievous son was lucky the unlikely blockage didn't lead to a serious infection.

The healthcare company director believes mums should be extra cautious during lockdown when kids are bored and more likely to play around with anything they find in the house. 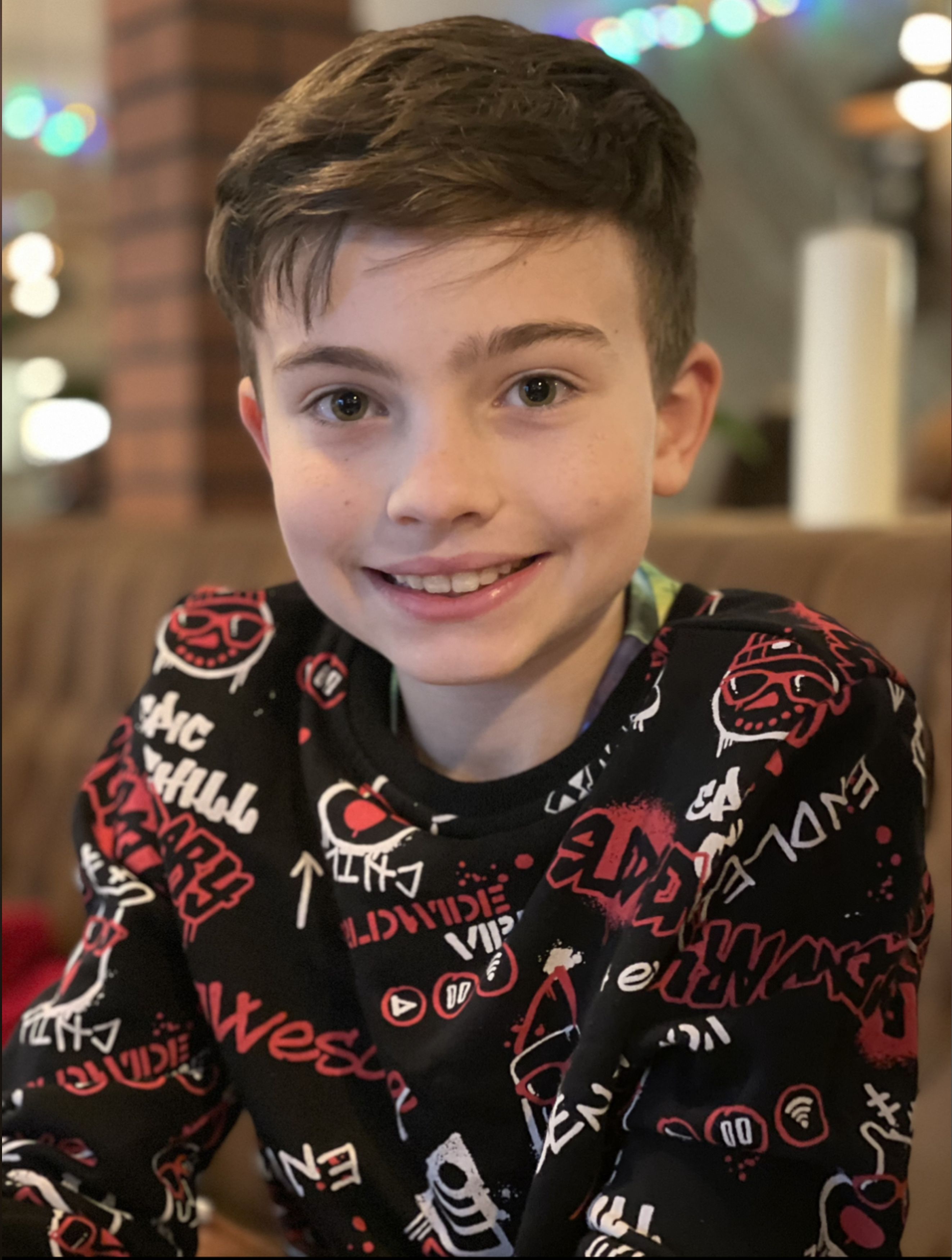 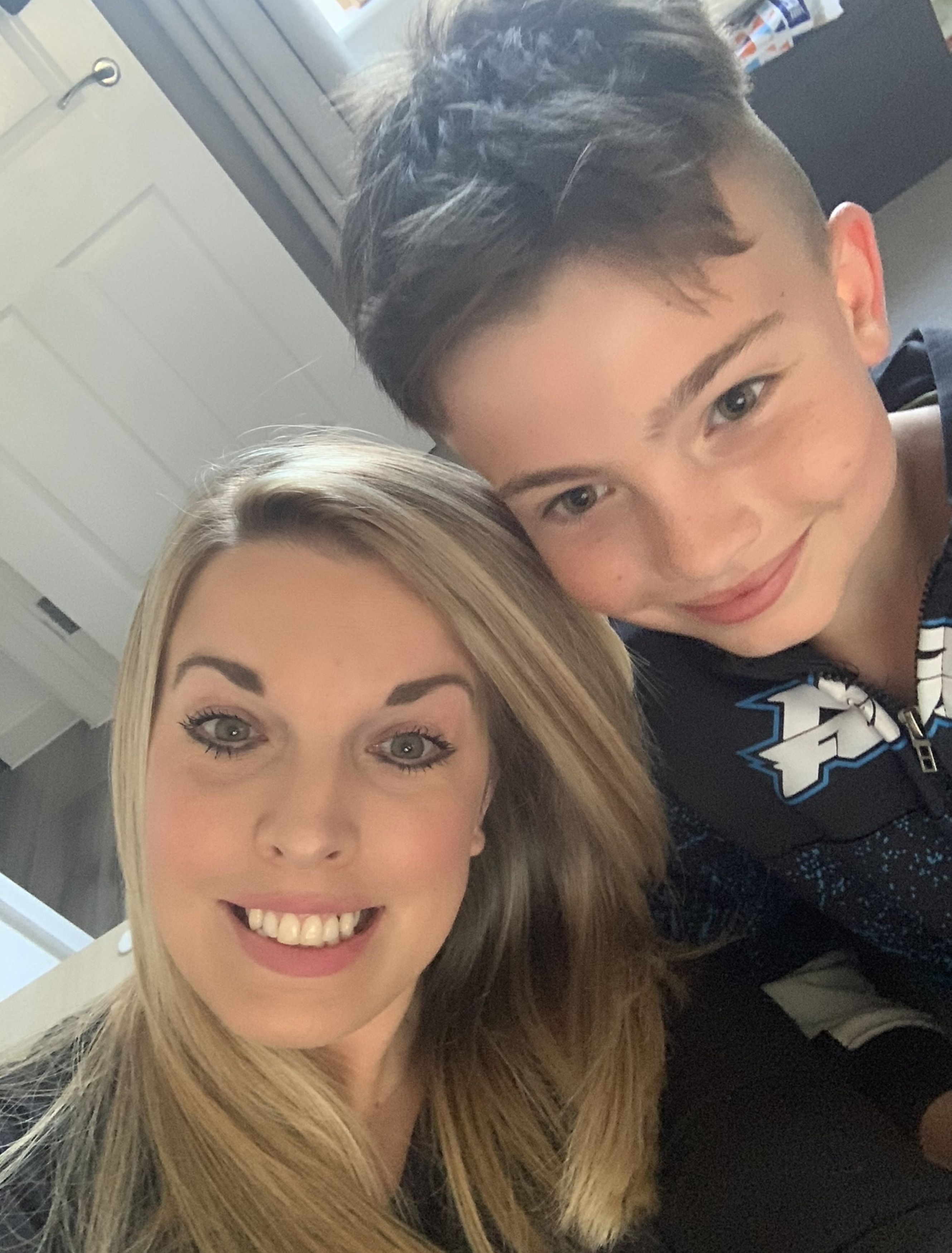 Last week, she shared her petrifying experience from November 2019 on Facebook accompanied by an unsettling snap of the shrivelled object in a bid to warn other parents to be vigilant of what their children put in their ears.

Gemma, from St George, Bristol, said: "Ashton's always got something hurting, so he said about his itchy ear and when I first looked I thought it was a big chunk of wax.

"When I pulled it with the long tweezers it just kept coming and coming. I thought he had brain worms and the longer we sat there the more his brain was getting eaten.

"I felt sick, and I thought something might fly out at the end. It was like a nightmare or the horror films you watch. Ashton was more worried about my face than his.

"I tried to stay calm for him but inside I was panicking. I'm the sort of person who laughs even if things go wrong. 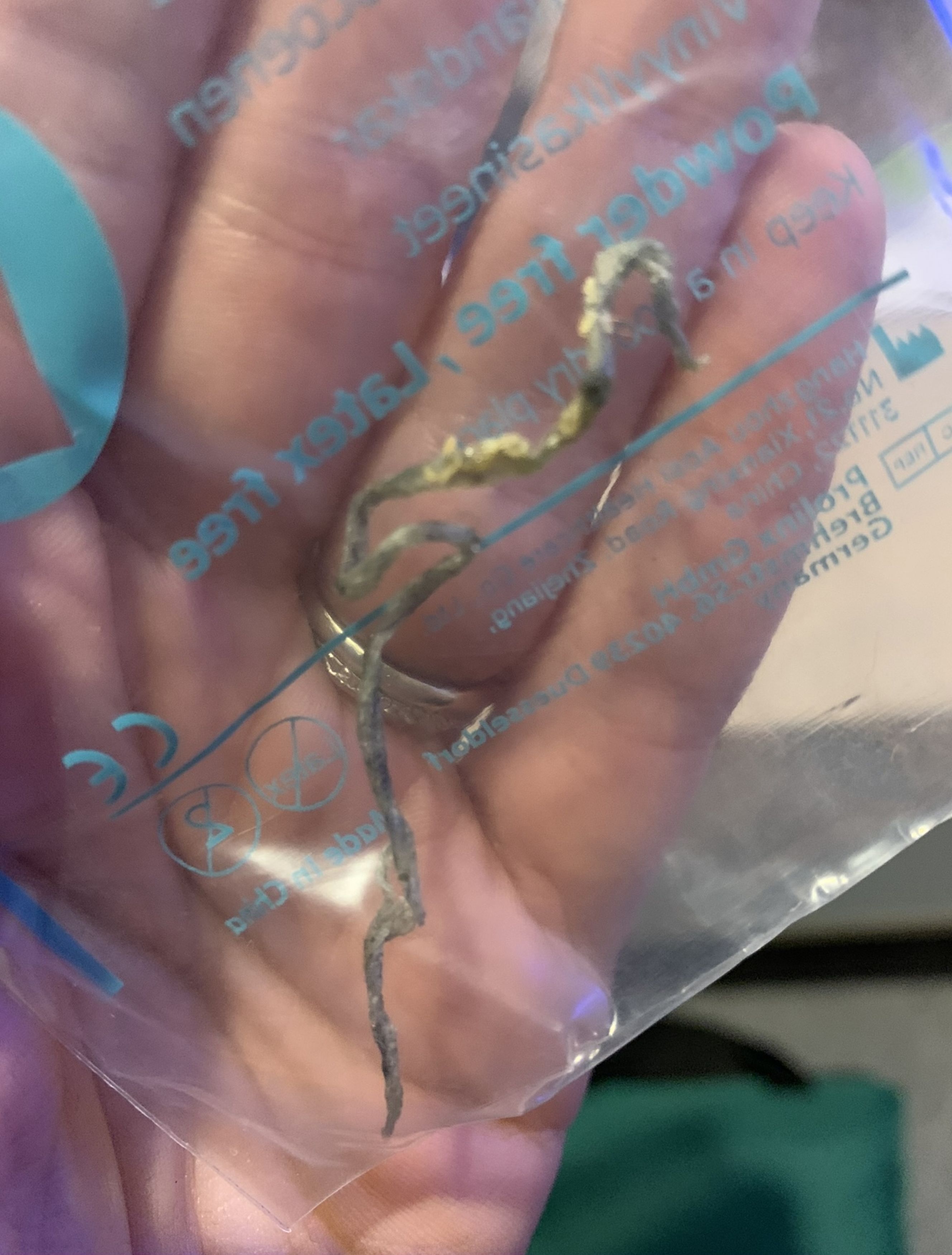 "We tried to dissect it but it wouldn't come apart. It was like a dried worm, so I called the doctors and we went straight away. They didn't know what the thing was either.

"When we got home he said 'I wonder if it could be the tape', so I just said 'what'? He said he'd put some tape in and couldn't get it out, so it might be that.

"The kids like to make things with tape, so he probably ripped a bit off, started playing with it and then put it in his ear, then it got all folded up into a ball. It still sounds disgusting now.

"I don't know whether he'd forgotten or he was too embarrassed to say, but I was so embarrassed. I thought I'd just wasted everyone's time."

Gemma says she never heard from the doctors about the test they ran on the piece of masking tape.

She's relieved to say Ashton, now 10, hasn't tried to shove anything down his ear since, and her two other children, Blake Horsfield, eight, and Abigail Tyson, seven, haven't either.

They live in Cheddar, Somerset with Ashton's 35-year-old step-dad Brian Tyson who helped panicked Gemma dissect the 'worm' at the time. 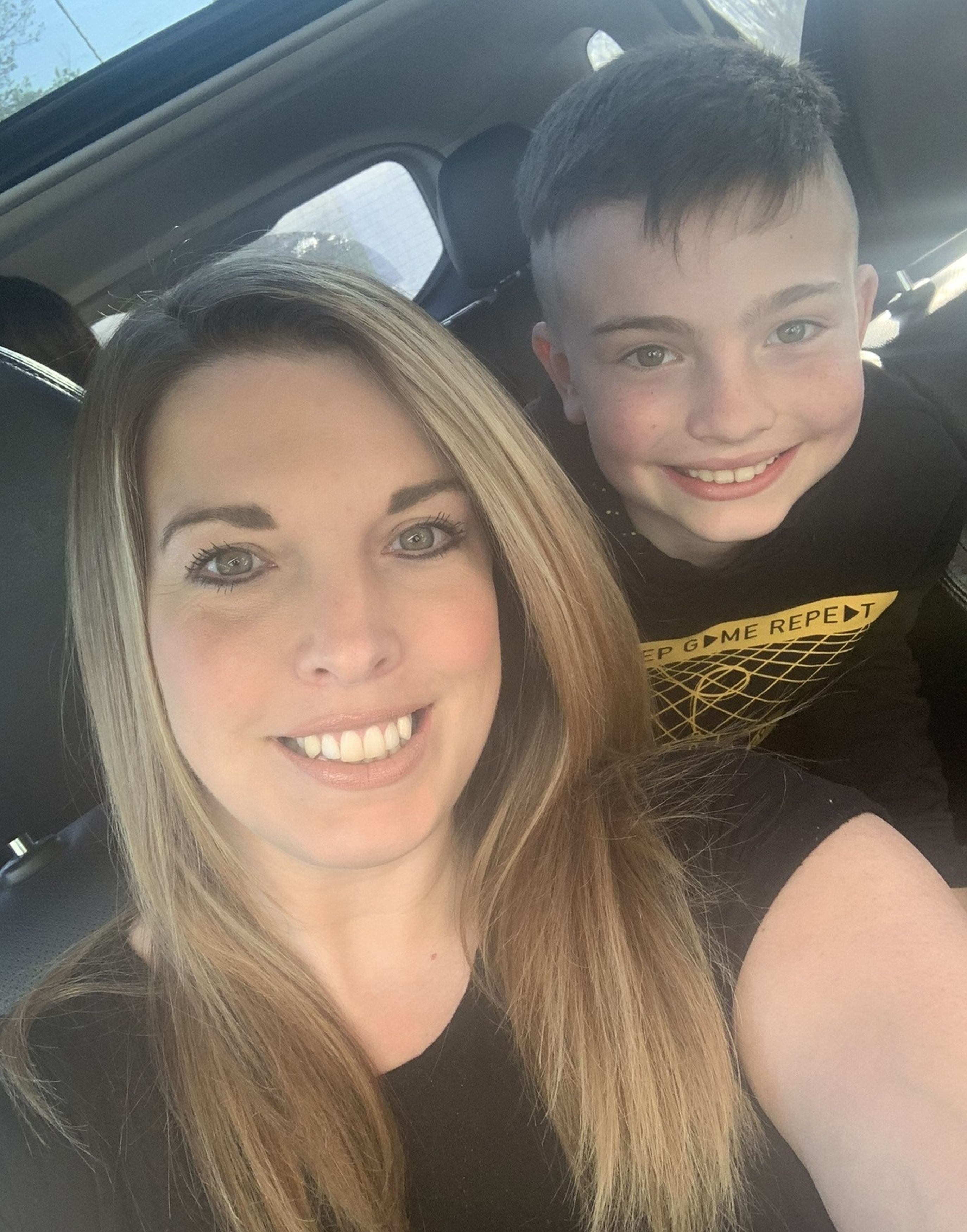 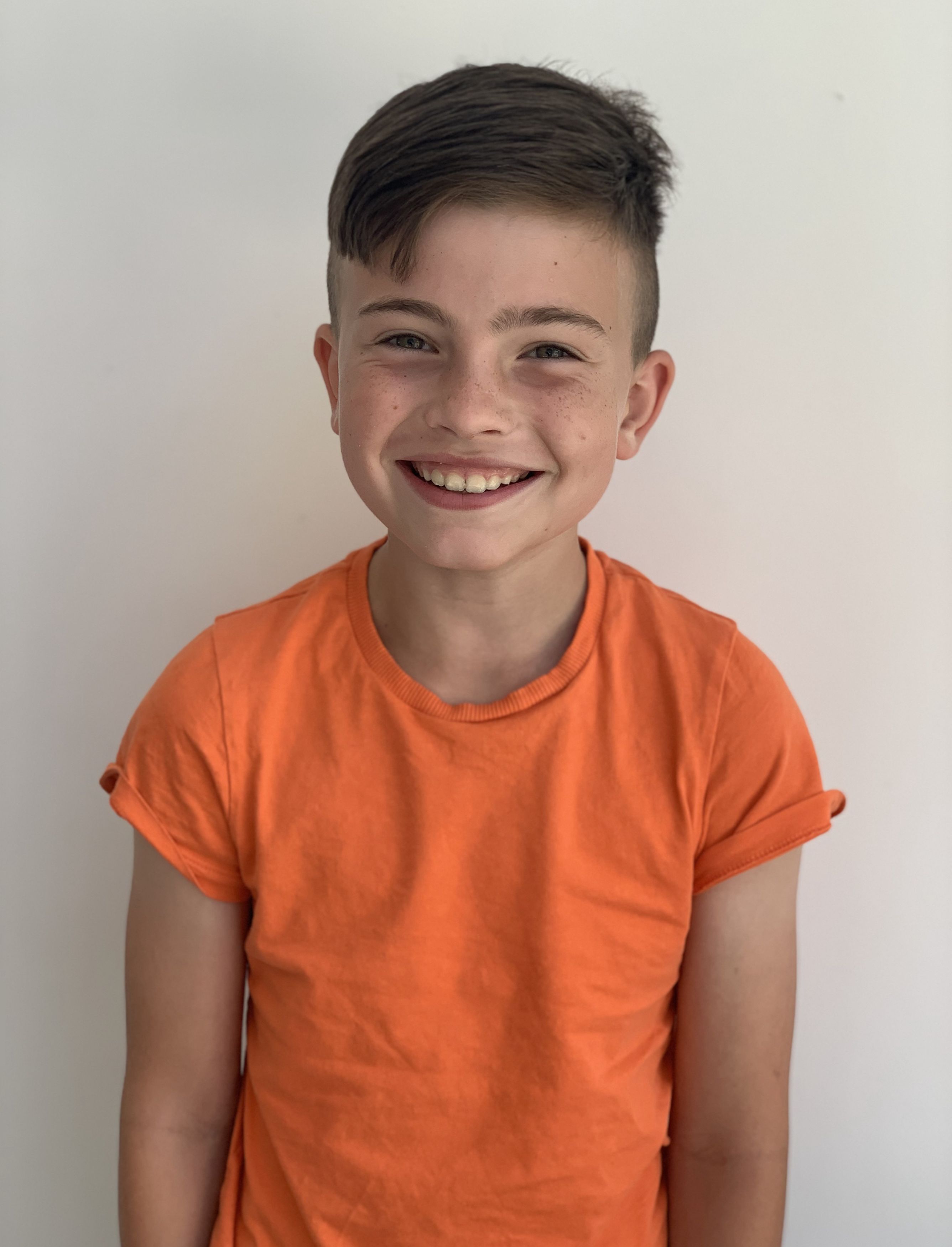 The pair now regularly check their children's ears and Gemma encourages other parents to do the same and make sure they have a suitable first aid kit to hand just in case.

Gemma said: "If your kid's got an itch in their ear then definitely have a look. People have had to have operations from things like that, so we were quite lucky.

"We just had a bog-standard first aid home kit, and it comes with the long thin tweezers. They're worth having because normal tweezers wouldn't have worked."

The 38-year-old's post charting the incident has gained more than 9,000 reactions on Facebook, and more than 4,000 replies showed many parents relate to the scare. 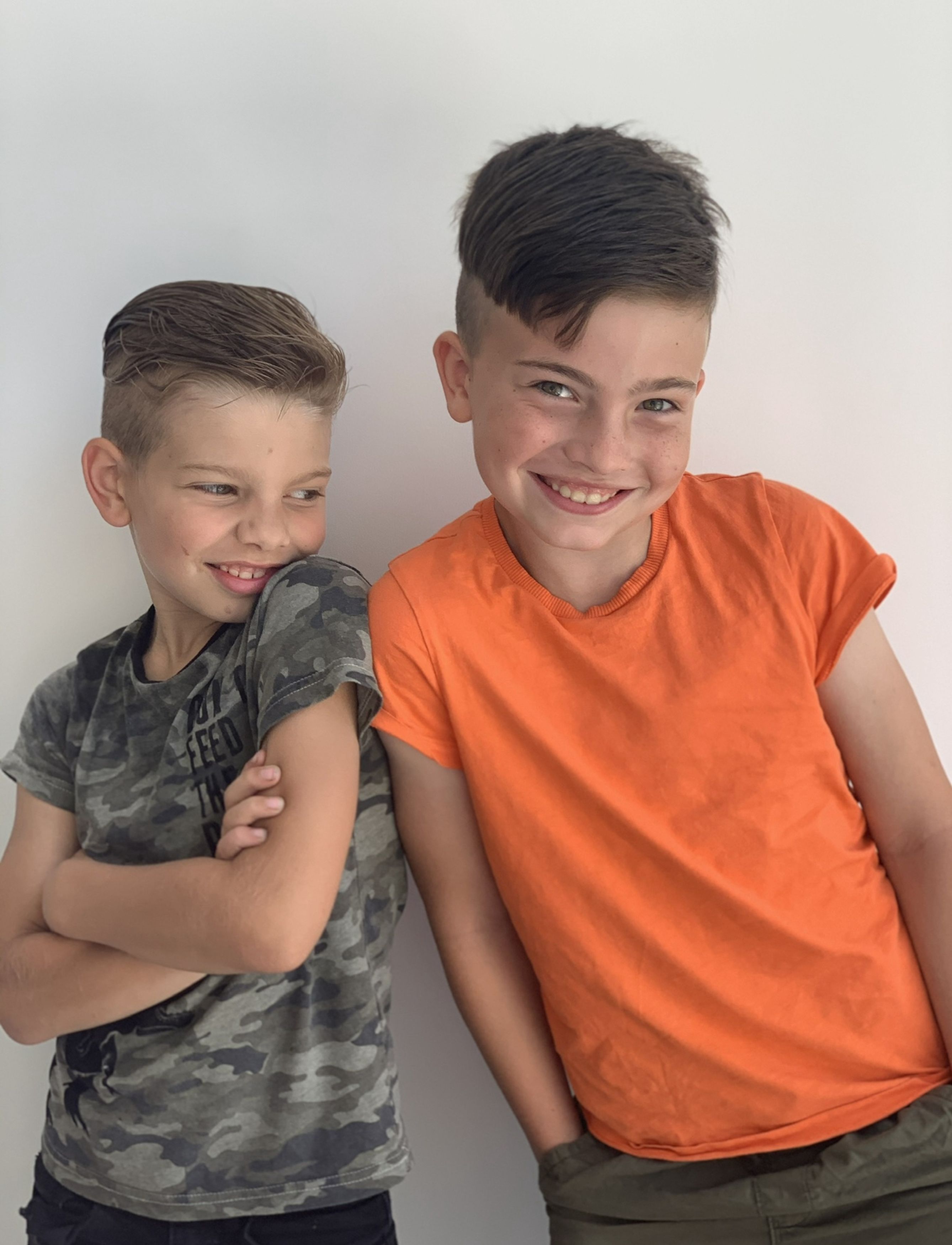 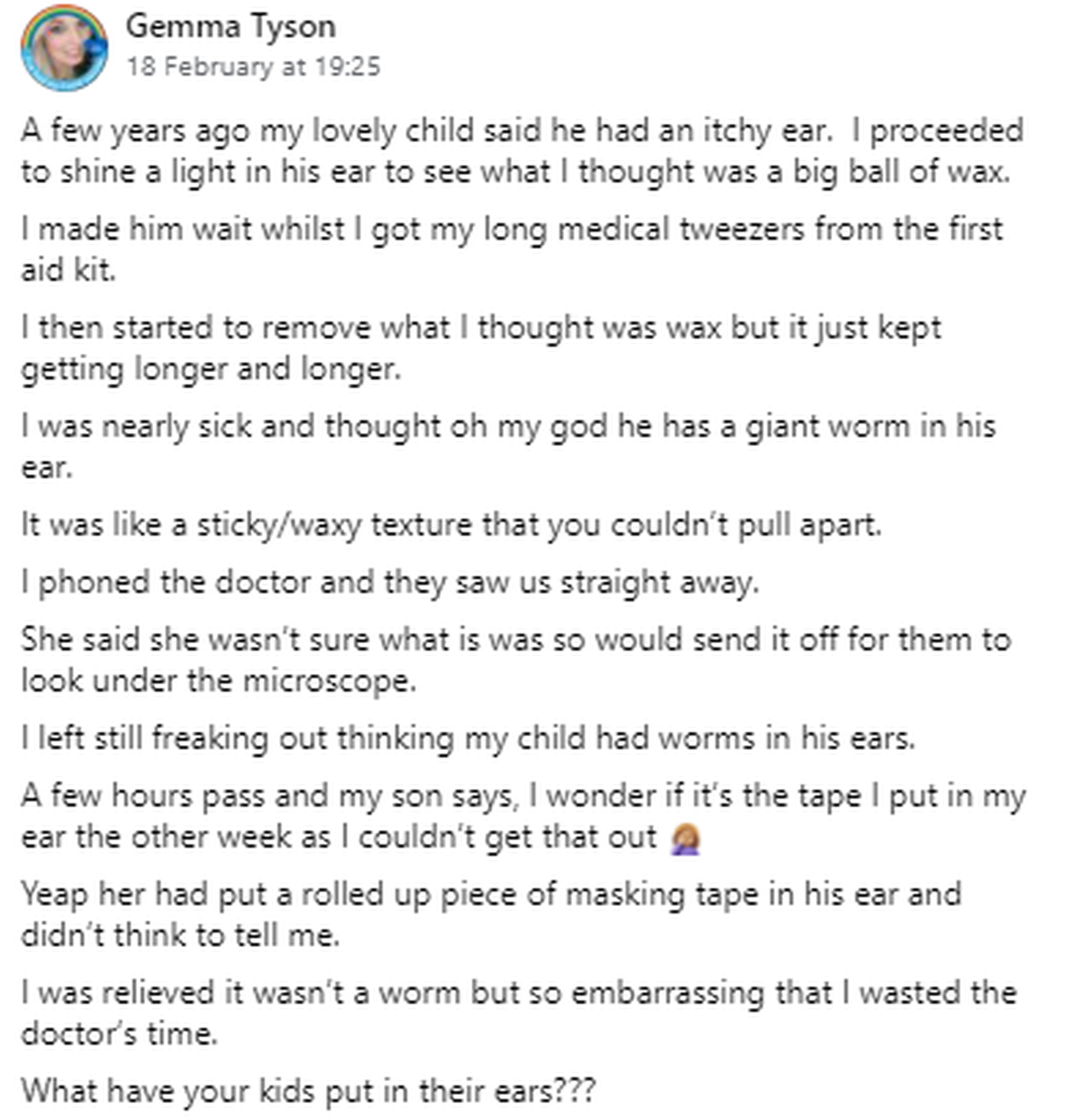 Gemma's post said: "A few years ago my lovely child said he had an itchy ear. I proceeded to shine a light in his ear to see what I thought was a big ball of wax.

"I made him wait whilst I got my long medical tweezers from the first aid kit. I then started to remove what I thought was wax but it just kept getting longer and longer.

"I was nearly sick and thought oh my god he has a giant worm in his ear. It was like a sticky/waxy texture that you couldn’t pull apart. I phoned the doctor and they saw us straight away. 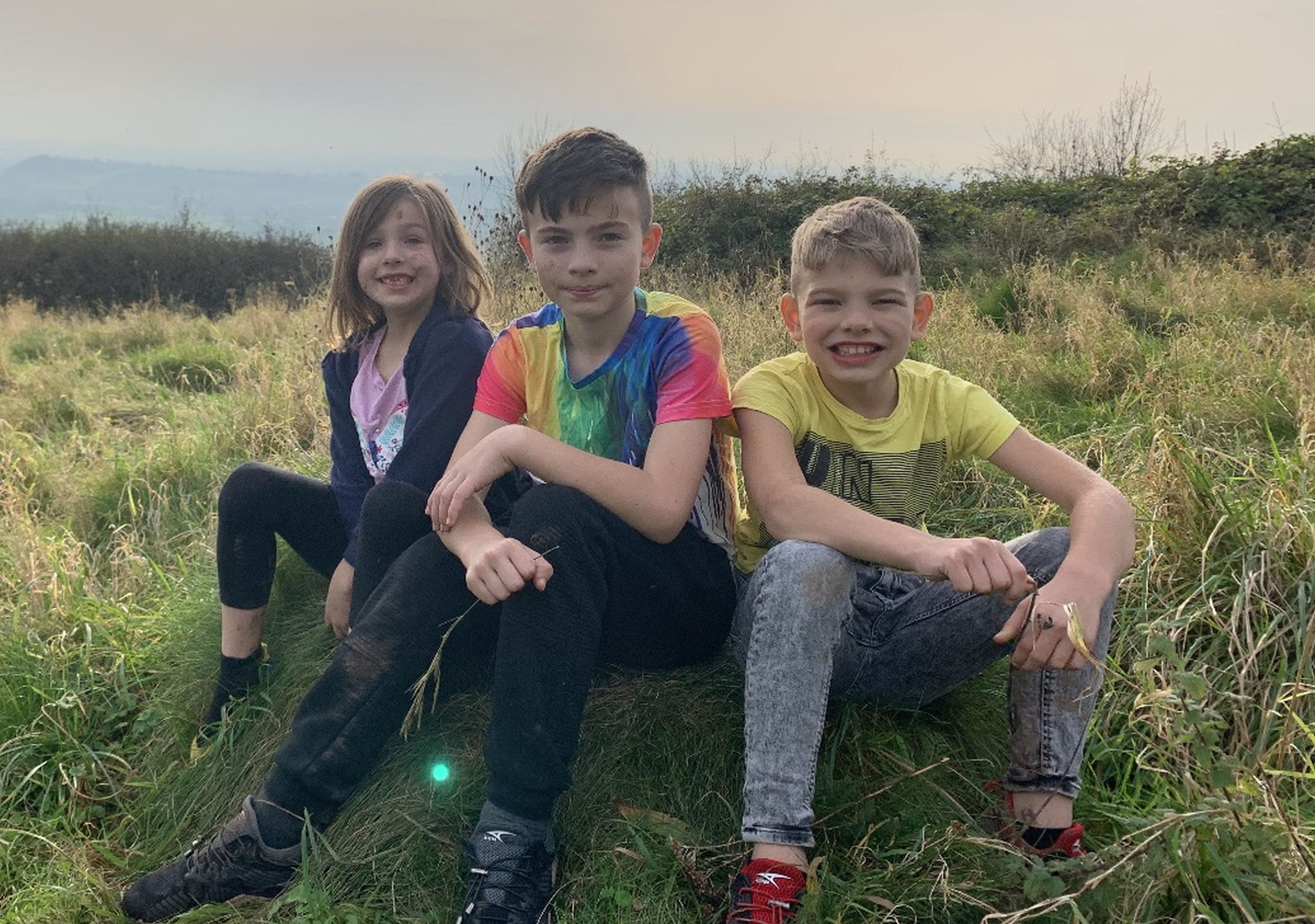 "She said she wasn’t sure what it was so would send it off for them to look under the microscope. I left still freaking out thinking my child had worms in his ears.

"A few hours pass and my son says, 'I wonder if it’s the tape I put in my ear the other week as I couldn’t get that out'. Yep, he'd put a rolled up piece of masking tape in his ear and didn’t think to tell me.

"I was relieved it wasn’t a worm but so embarrassing that I wasted the doctor’s time.

"What have your kids put in their ears?" 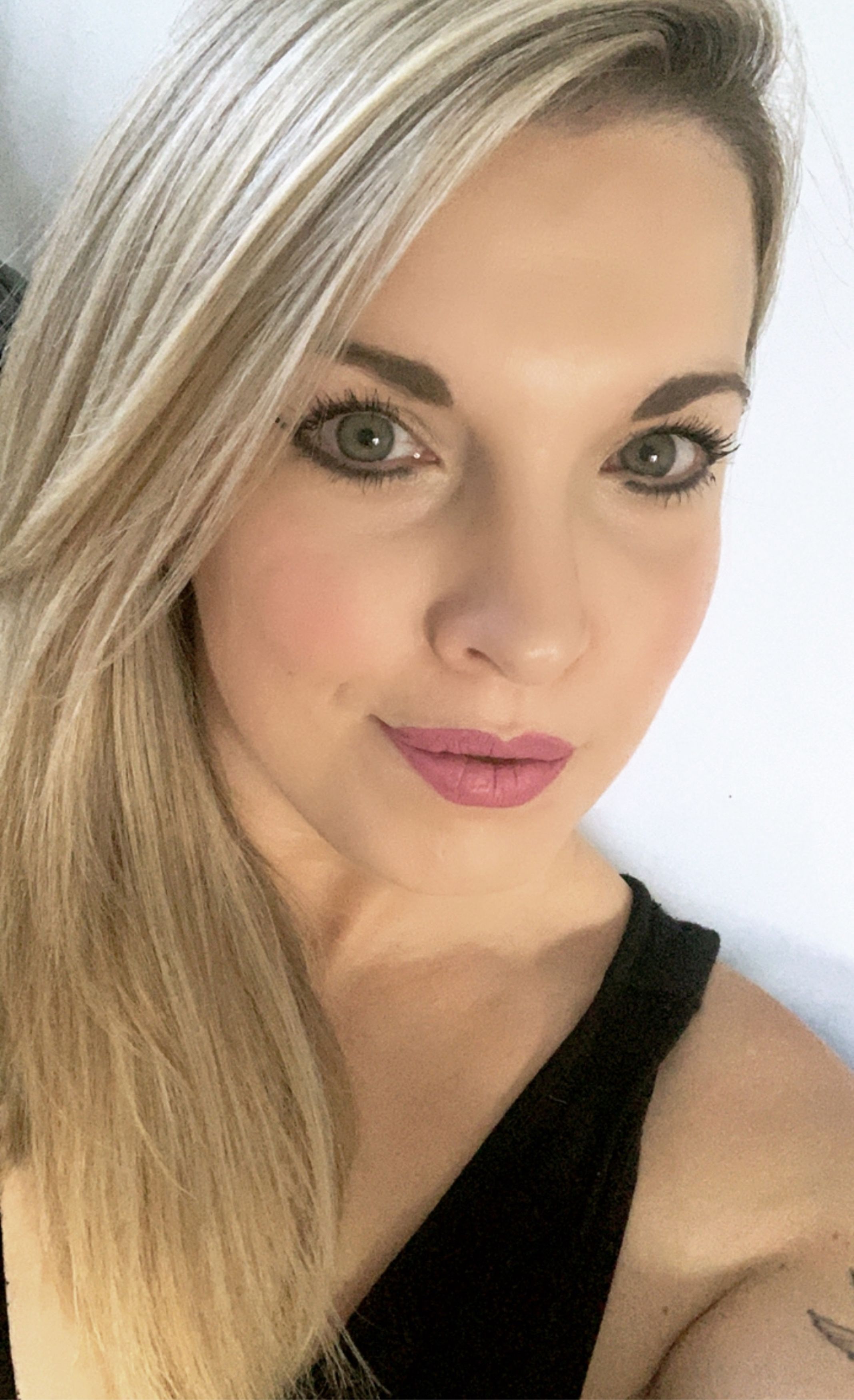 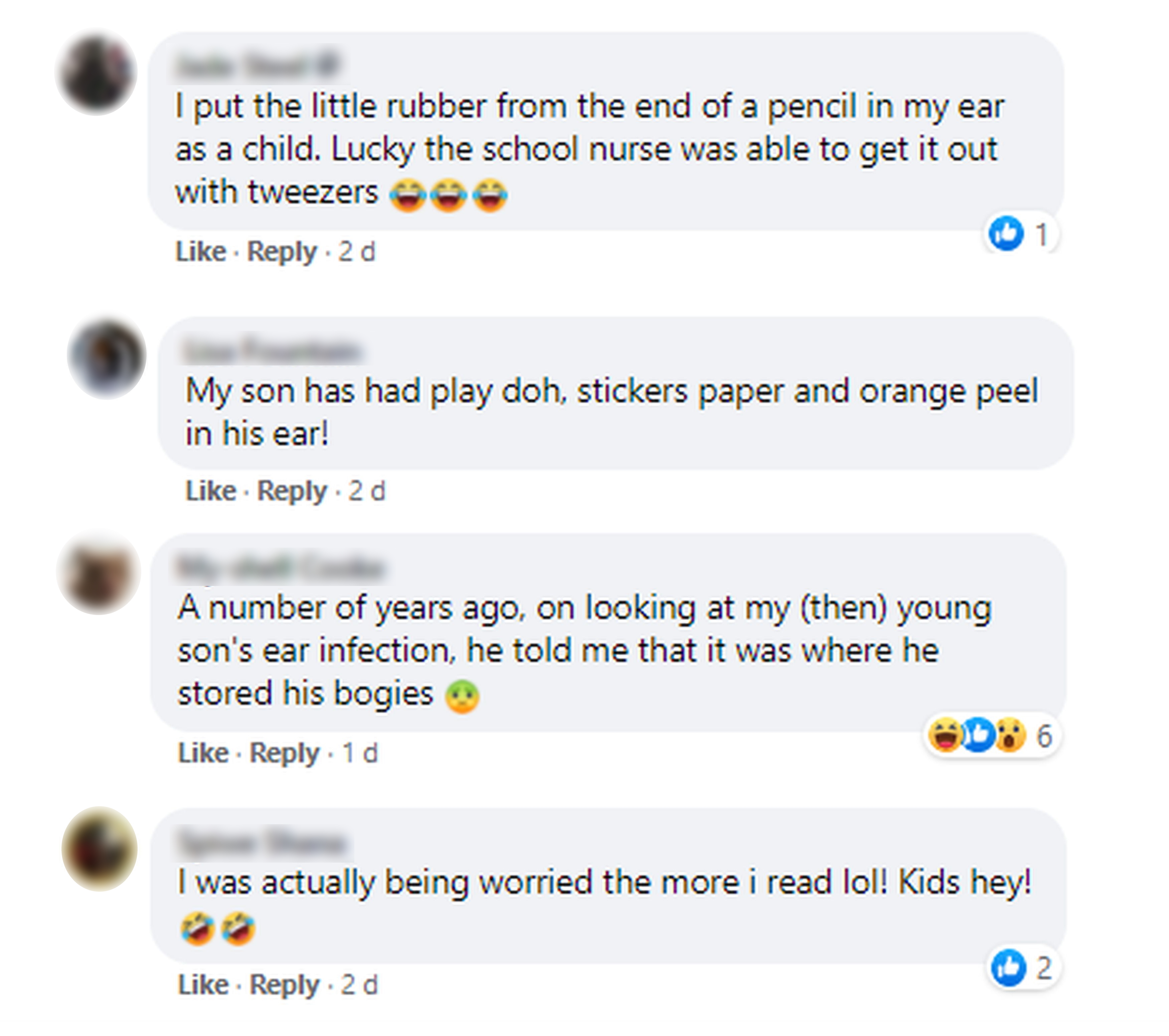 One member commented: "My son has had play doh, stickers paper and orange peel in his ear!"

Another admitted: "I put the little rubber from the end of a pencil in my ear as a child. Luckily the school nurse was able to get it out with tweezers."

A third said: "A number of years ago, on looking at my (then) young son's ear infection, he told me that it was where he stored his bogies."

Gemma added: "The reaction to the post shows how hard children are [to look after], and more so in lockdown because they're bored and more likely to try these exciting things out."

We shared a mum's warning as girl, 5, rushed to hospital with her tongue STUCK in Amazon water bottle after it turned blue.

And a mum warned after tot fell into hot bath & suffered burns so horrific his skin fell off.