AS parents, we always go into the school summer holidays with the best intentions.

But now that we've done all the day trips and educational games we had planned (twice), we've officially reached the point where we're handing them an iPad for some peace and quiet. 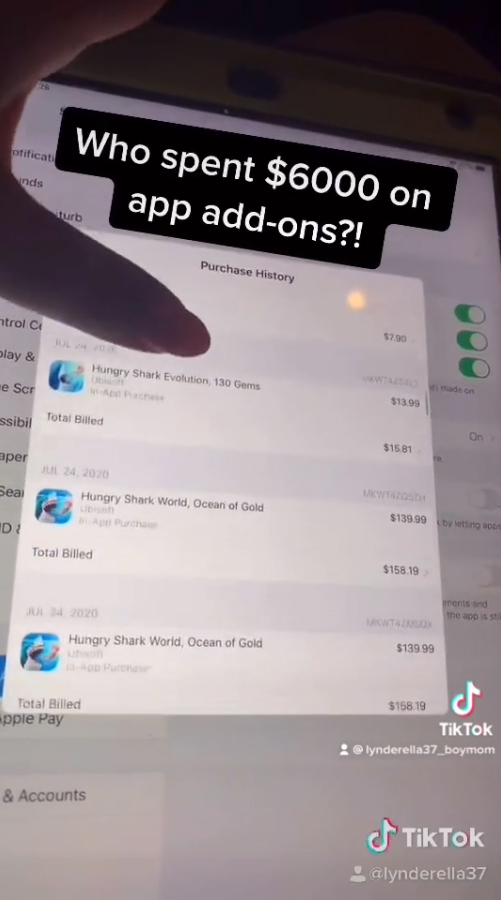 Sound familiar? No judgement. But let this mum's accidental oversight be a lesson to us all.

At first, the transactions started out around the £5 mark – do Ellie didn't think much of it.

But as she scrolled down her iTunes receipt, the add-ons started getting more and more expensive – with one of the pricier ones charging her $158.

Urging others not to make her mistake, Ellie wrote: "My PSA: don't give your child fingerprint access to the iPad!

When quizzed by viewers, Ellie said her son hadn't realised quite how much money he had spent and said his younger brother was egging him on.

She added: "He learned a valuable lesson that we All make mistakes, including Mommy."

Although she plead her case with Apple and her card company, Ellie has been refused a refund.

She added: "We never got any [money] back. Apple AND the bank did not issue any refund. Please don't make the same mistake!"

Needless to say, the video struck a chord with viewers and prompted people to share their own experiences.

One replied: "I swear these games target kids for this very reason."

"This happened to my dad," another said. "Relative's kid spent almost $3000 on the Clash of the Titans game."

For more parenting stories, this neighbour’s savage note criticises mum’s parenting skills and demands she stop using the car to get the kids to sleep.

And this is the exact nap schedule to guarantee your kid sleeps through the night.