As a style editor, I see myself as a fashion crash test dummy, launching into trends the moment they simmer on the street, social media or the runway. I have survived acid wash denim, over-sized blazers and sticky-taped sneakers but one trend in 2022 left me defeated.

Like Angelina Jolie, I blame Brad Pitt. It started with Pitt wearing skirts on the Bullet Train press tour in July and ended with me shaking in the corner of a Zimmermann change room, contemplating whether looking like a Bee Gee was socially acceptable in 2022. 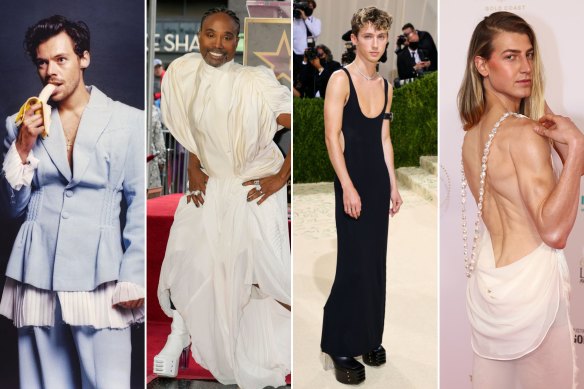 Following Pitt’s lead, I had worn a skirt and liked it but with fashion’s push towards gender-neutral designs I was playing it safe. I am 193 centimetres tall and 94 kilograms on a generous set of hotel scales and unlike Harry Styles, Billy Porter and Christian Wilkins, I have never gravitated towards dresses, fearing that I would look like Gene Hackman in The Birdcage rather than Troye Sivan at the Met Gala.

No such excuses existed for women’s shirts and trousers.

Brands such as Gucci, Nique, Fluid by Harris Reed and Gary Bigeni encourage shoppers to think beyond the labels of men’s and women’s and look at genderless clothing that appeals to your personal style and shape. A lunch invitation from Nicky and Simone Zimmermann, the founders of Australia’s most recognisable womenswear label, gave me the opportunity to dress without prejudice.

I have been writing about Zimmermann for nearly 20 years, reporting on their steady rise through the ranks of Australian Fashion Week to the New York runway and now Paris but had never worn an item of their clothing. To be fair, they started with swimwear and no one needs to see me in a bikini – ever. 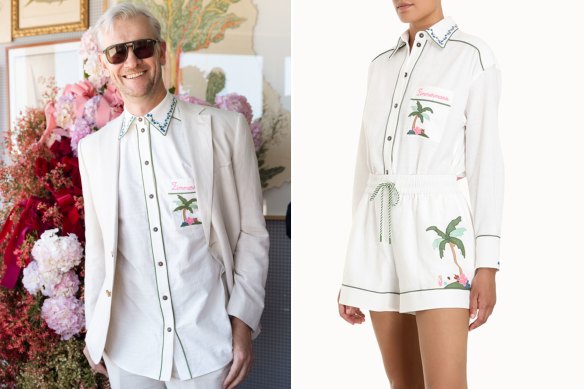 Now Zimmermann is dabbling with board shorts and have a collection of women’s shirts and pants that challenge binary notions of clothing with restrained details and whimsical designs. It was time to transition into the heart of womenswear.

At Zimmermann’s Paddington outpost, the perma-smiling staff were enthusiastic as I combed the racks for generously sized items. Dresses were out, and cropped towelling tops would have to wait until my Barry’s Bootcamp classes counteracted a deep dive into Christmas panettone.

My first find was a fringed, hooded poncho giving Owen Wilson as Hansel in Zoolander vibes. So hot in 2001 and perfect for an ayahuasca circle but not for lunch at Sean’s Panorama overlooking Sydney’s Bondi Beach.

Then the shirt appeared. OK, I’m evolved enough to call it a blouse. The cotton blouse had contrast piping on the collar that spoke to my love of mariachi bands and a palm-tree pattern on the back that was summery without relying on Zimmermann’s signature florals. 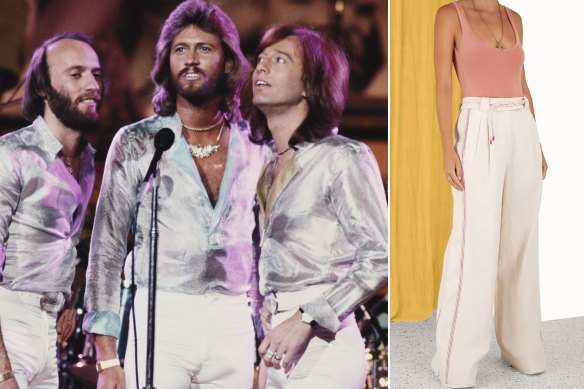 Flashbacks of being somewhere that I didn’t belong occurred the moment I entered the changing area, like being dragged by Mum through Myer’s lingerie floor as a toddler or doing shots at a lesbian bar, many years later. Uncomfortable glances from fellow shoppers were filed away for a future shame spiral.

Surprisingly, the blouse was a perfect fit. Who knew that I was a Zimmermann size three? Now came the real problem. What pants was I going to wear?

On its website, Zimmermann recommends wearing the blouse with a matching, high-waisted short, but they immediately remind me of Nellie Forbush in the musical South Pacific, a role outside my range in too many ways.

The sales assistant attempted to rescue me with a pair of high-waisted cotton slouch pants with a contrast trim. Sliding into them, the shame spiral returned faster than expected.

While I was happy accepting that the shirt was a blouse, I was physically uncomfortable standing in front of the change room mirror in a pair of slacks.

Two things were immediately apparent. I was not a size three in slacks and not all items of clothing are gender-neutral. Thanks to the snug fit, my genitals were in a sous vide situation, vacuum packed to my leg in a look favoured by Rod Stewart, The Bay City Rollers and the Bee Gees in the Seventies.

With serious adjusting at the waist and the shirt untucked, the staff assured me that I was not breaking health codes, but you could tell by the way I used my walk that my gender neutrality had crossed over to gender offensive territory.

In shock, I entered a retail coma and left the store with the slacks beautifully wrapped in my first Zimmermann shopping bag.

The delusions stopped when I tried the outfit at home, away from the encouraging staff. The slacks were folded and returned to the store.

At the lunch I wore the Zimmermann blouse with a trusty bone MJ Bale suit and was treated to compliments from Nicky and Simone and support on social media. Across the restaurant there was a man with a whippet waist in the pants I had tried on, looking amazing and modest, but I will wait to try this trend again when they come in a size four.