There is a scene, about halfway through “Cruella,” the new Disney origin story for the “101 Dalmatians” baddie, in which the Baroness, a fashion designer diva played by Emma Thompson, is sipping Champagne with her new employee — a would-be designer named Estella and played by Emma Stone — and lecturing her on what it takes to succeed in the business.

“You can’t care about anyone else,” the Baroness says, pursing her perfect blood-red lips and baring her perfect white teeth. “Everyone else is an obstacle. You care what an obstacle wants or feels, you’re dead. If I cared about anyone or thing, I might have died like so many brilliant women with a drawer full of unseen genius and a heart full of sad bitterness. You have the talent for your own label. Whether you have the killer instinct is the big question.”

As it turns out, she means “killer” literally — as does Estella (alter ego: Cruella), who in return narrows her eyes and replies “I hope I do,” setting up an epic-to-the-last-ruffle battle waged in dramatic sheaths, punk leather jackets, fire and straight pins.

You’ve heard of chewing the scenery? They chew the satin (as do moths, in one scene). 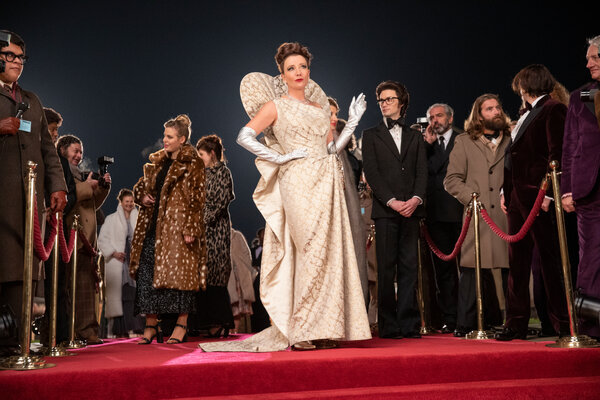 And thus does the demonization of fashion play on; its role as shorthand for all that is morally corrupt and venal in the world continues. It is one of Hollywood’s most beloved, if increasingly inane, clichés.

For as long as there have been films set in the fashion industry, that world has been portrayed as a gilded cesspool of caricatures, cattiness and occasionally criminality, with a twisted value system far removed from the cornfield heart of everyday life — no matter whether the film in question is a comedy, dramedy, satire or musical.

Consider, for example, what Bosley Crowther described as the “pertinacious troupe of style-magazine super-worldlings” in his New York Times review of “Funny Face,” the 1957 Hepburn-Astaire film he also noted proved that “there is nothing more illusory in our times than the costly adornment of females.”

Or think of Diana Ross’s would-be designer forced to chose between moral bankruptcy (as represented by fashion) and true love (social activism) in the 1975 movie “Mahogany.” The collection of cheating, preening narcissists that compose the designers and editors in “Prêt-à-Porter” in 1994. The idiotic designer and agent-turned murderous masterminds of “Zoolander” in 2001. And Meryl Streep’s famously autocratic magazine editor in “The Devil Wears Prada” in 2006.

Even “Phantom Thread,” the much-praised 2017 Paul Thomas Anderson study of relationship power dynamics starring Daniel Day-Lewis as a Balenciaga-like midcentury couturier whose genius justifies all sorts of obsessive-compulsive behavior, uses fashion as a stand-in for abuse.

We tend to think of bankers as avatars of evil in pop culture, but fashion designers are just as ubiquitous. If the one is vilified for its worship of filthy lucre, the other is tarred by its worship of frivolous lamé. Either way, they are seen as false idols begging to be knocked off the pedestal and into the dirt.

Not a Good Look

“Fashion is just such an easy target,” said Valerie Steele, the director of the Museum at the Fashion Institute of Technology, who said she became interested in the industry partly to understand why it was so “demonized.”

“In people’s subjective experience, fashion is mixed in with questions of coolness and popularity,” said Ms. Steele, who traces such questions back to high school and the issue of social acceptance.

“Those perceptions get formed really early,” she said. “Then the stereotypes as seen on film overlap with everyone’s lived experiences and seem true.”

Because everyone has been exposed to fashion on some level (everyone has to wear clothes), everyone starts to form opinions about it. Often those opinions are colored by irritation at the idea of being told what to wear.

“At the heart of the problem,” said Joanna Coles, the former chief content officer of Hearst Magazines and executive producer of the TV show “The Bold Type, “is the ludicrous idea that if you don’t change what you are wearing every six months, you are somehow ‘out.’” That someone, somewhere, thinks what you are wearing is not good enough.

Often, because fashion was for so long one of the few industries where women could rise to the top, those someones were female. And often their power was viewed with discomfort by those on the outside precisely because they were working women who had succeeded, and thus had to be defeminized or turned into the Wicked Witch of the West. Albeit with better clothes.

“Where are the caricatures of the most powerful, evil women in the world?” Wendy Finerman, the producer of “The Devil Wears Prada,” asked. She was speaking rhetorically because she then offered her answer: “Fashion.”

Meaning, if you have a character who is supposed to be powerful and evil, the fastest way to convince viewers of her flaws is to make her a designer or an editor. Like the current Cruella de Vil. Who was not always a fashion designer.

In “101 Dalmations,” the 1956 book by Dodie Smith, Cruella was the wife of a wealthy furrier — as she was in Disney’s first animated film, in 1961. It wasn’t until Glenn Close embodied her in the 1996 live action version that she became a designer in her own right, running the House of DeVil.

But “Cruella” takes the story line to a new extreme, jettisoning fur for the fashion world generally, giving Cruella a designer dream and upping the ante with her great rival/mentor, the Baroness, who runs her own couture house and swans around in stylized sheaths stealing ideas and hurling barbs. It adds society galas, fashion shows, vintage stores, Liberty of London and sewing machines — and the idea that it is through fashion that Cruella is freed to be her true, dastardly self.

As damning indictments go, that’s a pretty big one.

“Thematically, I thought it would be an interesting approach,” said Craig Gillespie, the film’s director, who said he was attracted to the idea of fashion as a form of self-expression and way to make a statement. Even if that statement is about destroying the establishment that exploited you through equally violent means.

You can understand why it is tempting. Fashion, like film, is a highly visual medium. It is often, as Ms. Steele said, highly theatrical. The clothes in “Cruella,” as created by the costume designer Jenny Beavan, are particularly fabulous, referencing Dior’s high-glamour cocktail sheaths (for the Baroness), Vivienne Westwood’s deconstructed punk Victoriana and Alexander McQueen’s high-octane extravagance (for Emma Stone’s Estella/Cruella).

And there’s their dialogue.

“I remember Michael Kors once saying he was so inspired by a beach he brought back 80 pounds of stones in his suitcases,” Ms. Coles said. “The customs agent couldn’t believe it.” She added that when Jason Wu proffered collection notes that described styles inspired by watching a waiter in Venice shave truffles onto his pasta, she could understand why many may have found that hard to swallow.

“He’s an artist, so it means one thing to him — color or movement — but to anyone normal, it would seem ridiculous,” she said. “It often feels that not only are these designers pretentious and the clothes impossible to afford, but you are being tantalized by something you can’t have.”

Ms. Finerman agreed. “Fashion for so long was something unattainable,” she said. “And when something is unattainable, you feel comfortable attacking it or making fun of it.”

At one point in “Cruella,” Ms. Stone’s character says to Ms. Thompson, “You’re going to kill me because I upstaged you?” Ms. Thompson’s character responds, not surprisingly, in the affirmative.

But while fashion is a glittering lure to filmmakers, it is also a minefield. How do you caricature something that is already teetering on the edge of caricature without falling into the morass of plain old dumb?

“It’s a really hard balance to achieve,” Ms. Finerman said. And it is why, Ms. Steele said, “there have been so few really good films about fashion.”

Though fashion is a world that seems “ostensibly accessible,” as Ms. Coles said, especially now that shows are livestreamed on every social media platform, it’s actually much more nuanced than feature films ever really credit. Just because it looks like an easy target doesn’t make it easy to hit.

Indeed, the most successful fashion films are usually not films about the industry at all, but films that use fashionable clothing as expressions of character. “Clueless,” for example, or “American Gigolo” or “The Great Gatsby.” Or, increasingly, documentaries that expose the human side of the industry: “Unzipped” or “The September Issue” or “Valentino: the Last Emperor.”

You relate to them not because they feed our most unvarnished desires to take something down but because they show that beneath the glamour lie the vulnerabilities and insecurities we all share. And because they acknowledge the wonder and transformative potential of dress. “Cruella” gets that but turns it dark.

Even as the megaphone of Disney has amplified the stereotypes, fashion itself has moved further and further away from that reality, with designers transforming into chief creative officers: talking fluently about SKUs, ROI and supply chain issues, and spending most of the day sitting in meetings rather than sketching in ateliers.

“Inclusivity” and “transparency” are the mottos of the moment, rather than “elitism” and “genius,” and brands and those who represent them are bending over backward to demonstrate their sensitivity. You can debate the effects of that evolution on creativity but not the fact that it is happening. It just isn’t happening dramatically enough to make for … well, good drama.

Mr. Gillespie said he “didn’t have much sense of fashion films” before starting “Cruella” and didn’t consult with any fashion insiders when he was putting the film together. Rather, he focused on using a wide variety of archival photographs of places like the Dior workrooms for reference. The film is, after all, set in the 1960s.

But even then designers did not dress in their most extreme creations to actually work (the Baroness always looks as if she is about to attend a cocktail party), or strut the runway with more exaggeration than any model (as Estella/Cruella does).

Perhaps it doesn’t matter. And the movie does get one big thing right, even if it is not chronologically accurate: Fur is no longer considered chic in many circles.

And in that hive mind, fashion is still apparently the bad guy. Despite — or more likely because of — all the buzz.