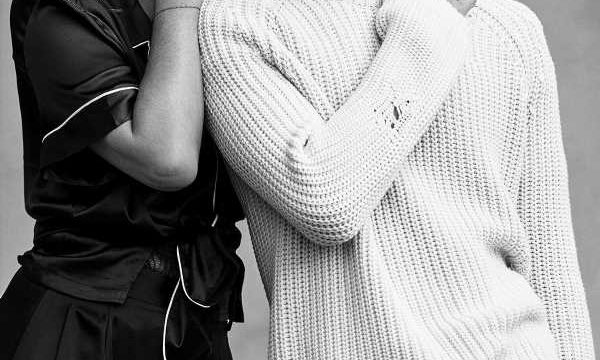 Supermodel Helena Christensen and son Mingus Lucien Reedus are reflecting on their close relationship for an extra-special campaign.

In honor of Mother's Day, the lookalike mother-son duo partnered with Victoria's Secret, along with a group of other stars, to model together to celebrate the strength of moms throughout all stages of life. The beautiful black-and-white campaign images, shot by photographer Cass Bird, feature Christensen in a Victoria's Secret Satin Short-sleeve PJ Set as she embraces her 21-year-old son, dressed in a distressed sweater and jeans.

"What surprised you most about being a mom?" Mingus asks his mom in the brand's moving campaign video. Christensen, 52, replies: "I wouldn't say surprised but overall what a crazy beautiful journey it's been and how much you've taught me compared to what I feel I've taught you. It's the best thing ever. So much work. So much beautiful work."

The supermodel also shares in the clip above that "the biggest surprise about having a child" is that you begin to "think about life from a completely different perspective."

Some of the other love-filled campaign images feature pregnant model Grace Elizabeth (who just revealed the birth of son Noah in a different Victoria's Secret campaign) and husband Nicolas Krause, who adorably hugged her pregnant belly. "I have this tiny, beautiful human inside of me," Elizabeth says as she showed off her growing stomach in the Victoria's Secret BBV Demi Bra, BBV Lace-Front Hiphugger Panty and Flounce Robe for the campaign. "Aw! My baby. I'm ready to do it. I'm ready to be a mommy."

Swedish model Sabrina Karlsson reflects on motherhood in the ad spot as she poses with husband Ricky Jackson and son Zion. "Something that really mattered is that my husband [and I] are really like a team and we do this together," Karlsson says. "Being a mother has made me to be selfless unconditionally," Nicholas' mom says with tears in her eyes during the campaign video.

"Aw, I love you," Nicolas replies. "You are the best mom ever, in the world, in the universe. I love you."

Alongside the new campaign, Victoria's Secret teased the launch of the new Body by Victoria Wireless Maternity Bra coming this fall.

"Body by Victoria is one of the most loved bra collections at Victoria's Secret and the maternity bra design will be based off of a beloved bra silhouette, the Body by Victoria Wireless Bra," the lingerie giant shared in a statement with PEOPLE. "More information to come in Fall 2021."