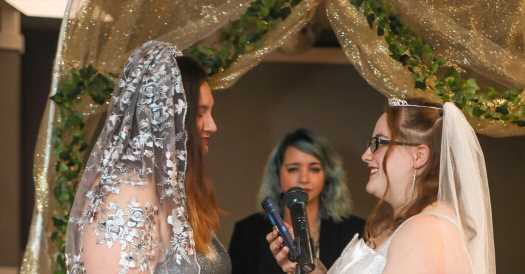 First came blood brothers, best friends who would solidify their bond by cutting themselves and swapping a bit of blood. Then came the tiny house besties, friends moving into adjoining tiny homes. (“Bestie Row” in Texas, for example.)

Today some people are taking their friendships a giant step further: They are platonically marrying each other, vowing to never leave each other’s side for better or for worse.

On Nov. 14, 2020 at Greenwood Hall in East Islip, N.Y., Jay Guercio and Krystle Purificato donned wedding gowns, walked down the aisle, exchanged rings and shared their first and only kiss. Ms. Purificato is in the process of changing her last name to Guercio.

“I want her to continue to be my best friend and my life partner,” said Ms. Guercio, a 23-year-old student studying professional communications at Farmingdale State College.

The besties, both queer and open to dating anyone but each other, met in 2011, and decided to get married in September. They sleep in the same bed but their relationship remains platonic.

Ms. Guercio and Ms. Purificato wanted to get married because they wanted to be legally and socially recognized as a family.

“We wanted the world to know we are each other’s go-to person in the world, and to be able to handle legal matters with the other appropriately,” Ms. Guercio said. “We are a couple, a unit and partners for life.”

Ms. Guercio said their marriage is stable, it’s long-lasting and it has no conditions.

There are no statistics about the number of platonic, best-friend marriages, and many people who are in them aren’t open about their situation. But chat boards on Reddit and within smaller asexual and aromantic communities have popped up recently, suggesting this could be a larger portion of the marriage population than numbers portray. (Asexual is defined as having no sexual feelings or desires; aromantic means having no desire for a romantic relationship. Hetero-monogamous is a sexual relationship between a man and a woman.)

“It should be acknowledged that we’ve really normalized heterosexual monogamous romantic relationships to the point of stigmatizing other kinds of relationships,” said Nick Bognar, a marriage and family therapist in Pasadena, Calif. “All of this is to say, I think this probably happens a lot, but people don’t talk about it much because their relationships are invalidated by others when they’re seen as not being part of the norm.”

Historically, marriage was an economic proposition, but it has shifted over time to a choice representing an all-consuming relationship, said Indigo Stray Conger, a sex and relationship therapist in Denver. Under this framework, couples expect each other to fulfill all their needs: social, psychological and economic.

“Platonic marriages raise an interesting question related to what elements are most important in a marriage, and what needs partners theoretically must meet for marriages to be successful,” said Jess Carbino, a relationship expert who lives in Los Angeles and is a former sociologist for the dating apps Tinder and Bumble.

Kim Reiter, 40, never considered marrying a best friend, though she considers herself to be nonbinary, aromantic and bisexual. Ms. Reiter, who lives in Dortmund, Germany, and is unemployed, tried OkCupid in 2013 and found her husband, who is aromantic and asexual.

They quickly became platonic best friends and married in 2018.

“Our daily life is that of best friends: We talk and laugh a lot, watch movies, but there is almost no physical element in it,” Ms. Reiter said. “Sometimes we hug or give massages to each other, and every night we have our good-night kiss, but we have separate bedrooms. We are the most important people in each other’s lives.”

[Sign up for Love Letter and always get the latest in Modern Love, weddings, and relationships in the news by email.]

Kema Barton and Dene Brown, of Columbus, Ohio, are both pansexual and have a similar platonic marriage. (Pansexual is defined as sexual, romantic, or emotional attraction toward people regardless of their sex or gender identity.) They have been best friends for seven years, and each has two children from previous relationships. In October 2020, just before Ms. Brown had her second child, the friends decided to get married and make all their life decisions together.

They decided to make it official because they wanted to build a family together, to raise their children together and to make all their major choices as a unit.

They’re in the process of buying a house and getting a joint bank account. Their children consider each other brother and sister, and they call each woman Mom.

“We’re committed to investing in one another so we can both be successful, and ultimately, we love each other so much,” said Ms. Brown, 30, a disabled Navy veteran. “In every way that you’d look at a husband or a marriage in terms of interpersonal connections and intimacy, it’s there.”

Ms. Brown and Ms. Barton have never been intimate with each other, and they both have given each other the freedom to date outside their marriage.

Kimberly Perlin, a psychotherapist in Towson, Md., said that couples in this type of arrangement often find compatibility and understand each other well, while also agreeing to the guidelines without being blinded by romantic feeling. Many of these relationships, she said, begin because the couple wants their family life separate from their romantic lives, as they don’t find their romantic lives to be stable.

Others may be disenchanted with love, and feel that longstanding friendships with a history of resolving conflict may feel like a safer bet.

“If both partners have clear understandings of what is expected, flexibility and communication skills to address conflicts that come up, do not wish to marry a romantic partner and are fine with going against the norms, then who are any of us to say it won’t work?” Ms. Perlin said.

Platonic marriages have been prevalent since marriage became an institution, while marrying for love is more of an oddity in human history, Ms. Conger said.

In the United States, where marriage is incentivized with tax breaks and other couple privileges, getting married to someone with whom you are not romantically attached affords multiple benefits, she said. “A platonic marriage is more than a passing year with a roommate who has different ideas about kitchen cleanliness,” Ms. Conger said. “A platonic marriage is a deep bond and lifelong commitment to a nesting partner you build a shared life with.”

Jullep Teah, 24, a call center representative in San Antonio, Texas, said she feels this way about her future wife, Ashley Roberts, 25, a direct support professional for the state of Texas. Ms. Teah, who is demisexual, plans to marry Ms. Roberts, who has been her best friend since the sixth grade. (Demisexual is defined as only being sexually attracted to someone with whom you have an emotional bond.) They already make all their financial decisions together. They have moved across the country twice together and are currently buying a home together. They share two dogs, and they’re not sure if they want children, but they may adopt in the future.

Ms. Teah said she has social anxiety, which makes it difficult for her to know anyone intimately — and she isn’t interested in romantic relationships. She said there’s more to marriage beyond sex and romance. Her emotional needs are fulfilled and she can’t imagine life without Ms. Roberts by her side.

“Meeting people is hard, getting a bond and romantic feelings is hard, and more and more young people are starting to realize that there are other benefits to marriage other than romantic love: I mean, isn’t the point to marry your best friend?” Ms. Teah said. “So why can’t it be your literal best friend?”