Reports show that ignoring older customers could cost clothing manufacturers $20 billion by 2040, so fast-fashion giant H&M is hoping to dent that figure by collaborating with stylish centenarian Iris Apfel on a range of clothing and accessories, available in Australia and online this month. 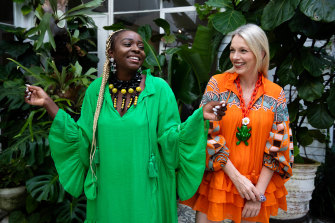 The assortment of vibrant tiered kaftans, cropped jackets and chunky jewellery in bold hues and clashing prints reflects the personal style of Apfel, a successful US businesswoman who found Insta-fame in her 90s and is featured this weekend in Sunday Life. Apfel’s milestone birthday last August was celebrated with a cover appearance on Harper’s Bazaar Arabia and the announcement of her new clothing venture.

The Iris Apfel x H&M collection is a rare example of brands taking their eyes off teenagers, turning to cashed-up customers with the strength to blow out more than 40 candles on a birthday cake. 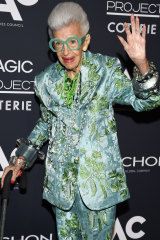 “My mum’s in her 70s and still loves clothes,” says Kellie Hush, senior adviser of the Australian Fashion Council and former editor of Harper’s Bazaar Australia. “I just think that designers don’t care. They want to design for girls who look hot in their clothes aged between 18 and 30.”

Australian labels such as Scanlan Theodore, where dresses do not go above a size 12, are barriers to greater age inclusivity, along with details incorporated into many designs.

“All this volume and cutouts in clothing immediately exclude an older woman,” Hush says. “They don’t want backless dresses where you can’t wear a bra or designs where they have to show their shoulders or stomachs.”

“The problem is that older women in the high fashion world are still considered to be Emma Balfour and Kristen McMenamy,” says author and former Vogue Australia editor Kirstie Clements. Australian model Balfour, 42, walked on the runway for Italian luxury label Bottega Veneta and McMenamy, 57, appeared in the Valentino presentation. Both models have maintained slender figures. 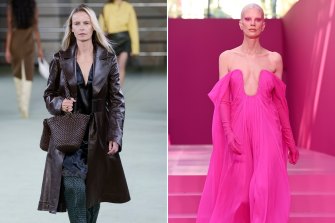 For H&M’s creative adviser for womenswear, Ann-Sofie Johansson, working with Apfel was a way to demonstrate that a love for fashion doesn’t stop at 40.

“She epitomises personal style – a style that is both beautifully flamboyant and eclectic as well as totally ageless,” Johansson said. “She shows what fashion is all about: it’s a means of expressing yourself, who you are or want to be and a way to have fun. She’s a true inspiration!”

For Apfel, who has modelled in Giambattista Valli haute couture, H&M’s fast fashion reputation was an added bonus of the team-up, with pieces in the collection ranging from $39.99 to $449. “I think H&M is fabulous and is an absolute pioneer in its field – which I love,” Apfel said in a statement.

Her style philosophy will certainly appeal to H&M executives watching the sales figures.

“Coco Chanel said take one thing off. I always said put another one on.”

The Iris Apfel x H&M collection launches on hm.com and in select stores on March 31.