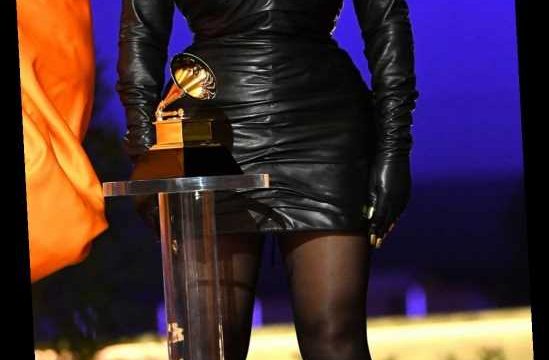 A Grammys without a Beyoncé Knowles-Carter fashion moment is always a bit anti-climatic. Luckily, the superstar gave us the style hit we needed, pulling out all the sartorial stops for a surprise appearance during music's biggest night.

While fans across the globe cheered on Queen Bey, 39, from their couches in sweatpants, the star went all out glam in a custom black gathered leather mini dress by Schiaparelli Haute Couture, with black gloves and sheer black tights, arriving just in time to accept the award for best rap performance with Megan Thee Stallion.

Never one to overlook the details, Beyoncé made sure her gloves featured trompe l'oeil gold fingernails, and topped off the look with massive drop earrings and sky-high Jimmy Choo platforms. Beyoncé leads the pack with a total of nine nominations and already took home her first award for best music video for "Brown Skin Girl."

Bey and husband JAY Z's 9-year-old daughter Blue Ivy earned her first Grammy for her work on the video alongside her mom. Blue can be heard singing a few lines on the track and also received a writing credit for her contributions.

The Black is King star has two nods in the record of the year category for "Black Parade" and her collaboration work on the hit song "Savage" with Megan Thee Stallion, 26. "Black Parade" also earned the Grammy decorated singer a nod for both best R&B performance and best R&B song, while he "Savage" remix is also up for best rap performance. After her best rap performance win with Megan Thee Stallion, Beyoncé tied Bluegrass-country singer Alison Krauss' record for most Grammy wins by a female artist. Later in the night, she won best R&B performance, bringing her total to 28, and becoming the most decorated female Grammy winner of all time.

Check out PEOPLE's full Grammys coverage to get the latest news on music's biggest night.

Beyoncé last attended the Grammys in 2018 with Blue Ivy and JAY Z, where she was nominated for best rap/song collaboration for "Family Feud" alongside her husband.

She wore black velvet cold-shoulder gown with matching front slits, which was custom-designed by designer Nicolas Jebran. Bey sat next to her daughter, who wore all white and silver Mary Jane shoes. Knowles paired her dress with a black sculptural hat also by Jebran, Alain Mikli sunglasses, Jimmy Choo heels, a custom Judith Leiber black panther purse and a pair of sparkling, collarbone-grazing custom Lorraine Schwartz earrings (containing 70 carats of diamonds), as well as handful of rings from the designer. In 2017, the superstar's Bey-by bump was on full display in a custom scarlet, sequin-covered Peter Dundas gown, featuring a low-cut neckline. Beyoncé, who was pregnant with twins Rumi and Sir Carter now 3, accepted two awards that year for best urban contemporary album for Lemonade and best music video for "Formation." Bey added even more bling to her head-turning look, by piling on $12 million in diamonds including a jaw-dropping lariat necklace by celebrity jeweler Lorraine Schwartz, made up of more than 400 carats of diamonds.

During Bey's performance the same night, we could literally see her halo a she commanded the stage like an angelic being in a golden crown and glittering lace gown, also by Peter Dundas.