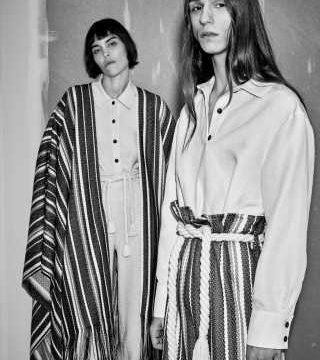 In the growing realm of upcycled fashion, Benjamin Benmoyal is well positioned to be a major player. For his first outing on the official Paris calendar, the Central Saint Martins alum and LVMH scholar, who began by weaving fabrics from repurposed cassette tapes and turning them into designs inspired by his Moroccan heritage, expanded into more commercial territory.

Retro-futuristic striped Berber kaftans, robes and capes, draped from squares of fabric to reduce waste, were familiar territory. These were complemented by more accessibly priced, versatile pieces like T-shirts and a canvas of basics in repurposed off-white silk, linen and cashmere, the pale hue adding touches of softness to the lineup.

They were created because of a partnership with LVMH Moët Hennessy Louis Vuitton’s new Nona Source platform, which opens access to deadstock fabrics from its brands to young designers and is set to launch this month.

While his atmospheric video featured only four of the looks, it translated his message well. Centered on a loom, one scene showed strips of tape that trailed in the foreground, seeming to merge dramatically with the coat worn by the model seated at the machine.

His T-shirts and sweatshirts featured giant pockets with long fringe details that reprised the core striped motifs, which were also iterated in a new material woven from deadstock yarns, as on ultra-wide pants fringed at the bottom and belted with a rope for a rough-hewn yet contemporary look.