Between network, cable and streaming, the modern television landscape is a vast one. Here are some of the shows, specials and movies coming to TV this week, March 29-April 4. Details and times are subject to change.

INDEPENDENT LENS: ’TIL KINGDOM COME (2021) 10 p.m. on PBS (check local listings). The filmmaker and journalist Maya Zinshtein looks at the unusual relationship between American evangelical Christians and Israeli Jews in this documentary. Zinshtein follows Yael Eckstein, the president of the International Fellowship of Christians and Jews, and the Kentucky pastors William Bingham III and his son Boyd Bingham IV, exploring why many evangelical Christians in America actively support Israeli Jews, and why their help is courted by some. Zinshtein has a “patient, observant approach,” Devika Girish wrote in her review for The New York Times. The director, Girish added, “catches her subjects in moments of damning irony: Eckstein smiles awkwardly whenever the End Times are mentioned by her evangelical allies; the Binghams encourage their poverty-stricken congregation to send their spare change to the Holy Land.”

RUNNING WILD WITH BEAR GRYLLS 9 p.m. on National Geographic. The actor Anthony Mackie has been tearing through bad guys this month in the new Marvel TV series “The Falcon and the Winter Soldier.” That show presumably has a far more robust on-set catering setup than “Running Wild With Bear Grylls” does, so Mackie was being a good sport when he signed up for Monday night’s sixth-season premiere of Grylls’s wilderness survival series. In the episode, Mackie joins Grylls for an expedition into one of the world’s great mountain ranges: the Dolomites in northeastern Italy. 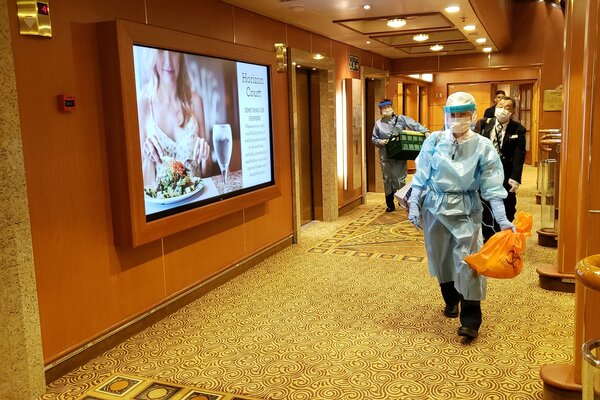 THE LAST CRUISE (2021) 9 p.m. on HBO. You may not have heard of this documentary’s cinematographers, but you’ve probably heard about them. They’re people who were onboard the Diamond Princess cruise ship when it became a coronavirus hot spot early last year. “The Last Cruise” revisits the outbreak and the ensuing full-ship lockdown using footage shot on board by passengers and crew members.

REBEL WITHOUT A CAUSE (1955) 9:45 p.m. on TCM. See Natalie Wood at three stages of her career on Tuesday night, when TCM airs “Rebel Without a Cause” sandwiched by “The Green Promise” (1949, airing at 8 p.m.) and “Inside Daisy Clover” (1965, at 11:45 p.m.). The iconic role here is the one in “Rebel,” in which Wood, James Dean and Sal Mineo play a trio of teens whom Bosley Crowther, pulling no punches in his 1955 review for The Times, described as “young people neglected by their parents or given no understanding and moral support by fathers and mothers who are themselves unable to achieve balance and security in their homes.”

EXTINCTION — THE FACTS 8 p.m. on PBS (check local listings). The prototypical English nature series host David Attenborough presents this sobering look at humans’ role in speeding the extinction of species across the globe, and how human activities affect the prevalence of pandemic diseases. Attenborough, 94, begins the program by looking straight into the camera, addressing the audience directly. “Over the course of my life, I’ve encountered some of the world’s most remarkable species of animals,” he says. “Only now do I realize just how lucky I’ve been — many of these wonders seem set to disappear forever.”

TRUE GRIT (2010) 7:05 p.m. on HBO. Jeff Bridges stars in this Coen brothers remake of a 1960s western. Bridges plays Rooster Cogburn, a growling U.S. marshal who is hired by a young girl (Hailee Steinfeld) to hunt down the outlaw (Josh Brolin) who killed her father. That mission leads them to cross paths with a Texas Ranger (Matt Damon) whose self-importance, like much else here, is played for laughs.

HYSTERICAL (2021) 9 p.m. on FX. Margaret Cho, Lisa Lampanelli, Kathy Griffin, Nikki Glaser, Fortune Feimster and Iliza Shlesinger are among the several generations of comics interviewed in this documentary, which looks at the experiences of women in the industry. The comedians talk about how they got their start, the women they looked up to as beginners, the stereotypes and sexist expectations they overcame in clubs, and what drove them to do comedy in the first place. Says Shlesinger: “I’m offering up myself, in an effort to find myself, hoping that in doing so you will also find yourself.”

CAROL (2015) 9:45 p.m. on TCM. Few films from this century make more sense to air on Turner Classic Movies — a channel known for vintage Hollywood titles — than “Carol,” the director Todd Haynes’s adaptation of Patricia Highsmith’s 1952 novel, “The Price of Salt.” Haynes both meticulously recreates the story’s midcentury setting and, thanks in large part to the screenwriter Phyllis Nagy’s reworking of the story, subverts it. Like the book, the film hinges on a romance between a young woman in New York, Therese (Rooney Mara), and an older housewife in the suburbs, Carol (Cate Blanchett). But while the novel specifically follows Therese, the film shifts between the two women’s perspectives. In his review for The New York Times, A.O. Scott called that decision “radical.” At once “ardent and analytical, cerebral and swooning, ‘Carol’ is a study in human magnetism, in the physics and optics of eros,” he wrote. “With sparse dialogue and restrained drama, the film is a symphony of angles and glances, of colors and shadows.”

ROBIN ROBERTS PRESENTS: MAHALIA 8 p.m. on Lifetime. The actress and singer Danielle Brooks (“Orange Is the New Black”) plays the gospel singer Mahalia Jackson in this biopic, which dramatizes Jackson’s growth into a star singer and a symbol in the civil rights movement. Brooks, who was nominated for a Tony Award for “The Color Purple” in 2016, is joined by several other Broadway performers — including the Tony-nominated actress Joaquina Kalukango, who was also in “The Color Purple.”

27TH ANNUAL SCREEN ACTORS GUILD AWARDS 9 p.m. on TBS and TNT. Nominees for the top honors at this year’s Screen Actors Guild Awards include many of the films and performers that are in the running for the Oscars, which are less than a month away. “Minari” and “The Trial of the Chicago 7” might have the most to gain — both are in the running forbest picture at the Oscars, and the ensembles of both movies are up for the best cast honor at Sunday night’s SAG awards. A win for either film would create momentum going into the Academy Awards.