When the Weeknd put out his first mixtape “House of Balloons” in 2011, his identity was largely shrouded in mystery. On Sunday, he took one of the biggest stages in pop, the halftime of Super Bowl LV at Raymond James Stadium in Tampa, Fla.

The Weeknd (a.k.a. the 30-year-old Toronto singer and songwriter Abel Tesfaye) began his set in the stands, emerging in front of rows of lights to perform “Starboy” and “The Hills” with a choir, then he relocated into a hallway of lights and mirrors for “I Can’t Feel My Face” as dancers with bandaged faces swarmed him. With fireworks lighting up the sky, he returned to the open air for “I Feel It Coming,” a large moon rising over the cityscape projected behind him.

While a musician in a glittery mask strummed a guitar, the Weeknd turned toward the more optimistic “Save Your Tears” and “Earned It,” accompanied by strings and ending on a long, triumphant note. An army of performers outfitted like the Weeknd dance-marched down the field and the singer energetically sprinted beside them to herald his grand finale: his recent hit “Blinding Lights,” an ecstatic, driving disco-pop song. 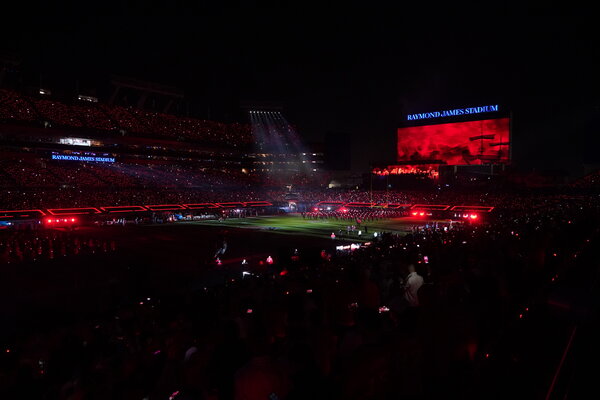 The Weeknd has released four albums since 2013, including his breakthrough, “Beauty Behind the Madness” in 2015. While promoting his latest LP, “After Hours,” he has dressed in a black shirt and red jacket and sported an increasingly banged-up and bandaged face while spinning a narrative in appearances at the MTV Video Music Awards and the American Music Awards, as well as late-night shows and in music videos. (He has said the character he’s portraying “is having a really bad night,” and in music videos the plot involves possibly being overtaken by an evil spirit and committing murder.)

“After Hours,” which was released in March after the pandemic lockdown paused live touring, opened at No. 1 on the Billboard 200 with the equivalent of 440,000 sales in the United States. After the demonstrations sparked by the killing of George Floyd, the Weeknd donated $500,000 to nonprofit organizations focused on racial equality and used his acceptance speeches at the V.M.A.s to say “justice for Jacob Blake and justice for Breonna Taylor.” But in what is seen a major snub, the Weeknd received no nominations for the Grammy Awards, which were to take place on Jan. 31, a week before the Super Bowl; the awards were later moved back to March 14 as Covid-19 raged in Los Angeles, where the ceremony will be held.

When the nominations were announced in November, the Weeknd spoke out on social media, writing, “The Grammys remain corrupt. You owe me, my fans and the industry transparency …” Harvey Mason Jr., the chairman and interim chief executive of the Recording Academy, denied that the Weeknd’s lack of nominations was retaliation for performing at the Super Bowl, as some suggested in theories online.

The Weeknd’s halftime show faced a unique set of challenges because of the pandemic. About 1,050 people worked on the show, a much smaller group than most years, and preparations included frequent Covid-19 testing and social distancing in production trailers. This is the second Super Bowl halftime show produced in part by Jay-Z and Roc Nation: Last year, Jennifer Lopez and Shakira performed sets heavy on dancing and Latin pride for fans jammed elbow to elbow on the field — a scenario that was impossible in 2021.