Set in 2032 and 2099, the new Amazon series, from the creators of “Westworld” and based on the book by William Gibson, has a lot to say about the present. 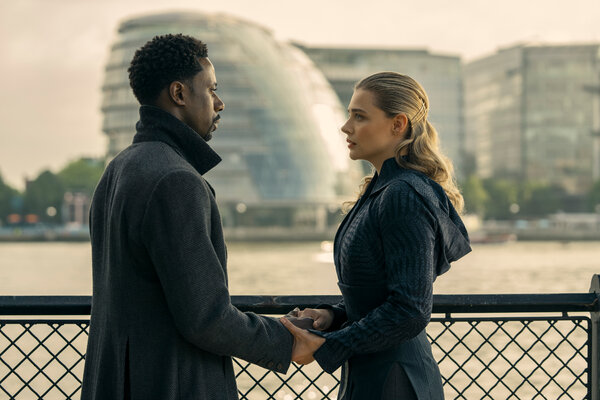 There are futuristic marvels galore in the new Amazon series “The Peripheral.” A virtual-reality headset that projects human consciousness through time. A pharmacy that fills a miraculous cancer-drug prescription sent from the year 2099. Cars that can cloak themselves like Wonder Woman’s invisible jet.

But “The Peripheral,” which debuted last week on Prime Video, isn’t really a show about the future — even though it takes place there.

For William Gibson, the prophetic 74-year-old author who imagined these technologies in his 2014 novel of the same name, science fiction is always about the present. His digital destinies never leap so far into the fantastical that they can’t be recognized.

“We steadily learn to take for granted things that wouldn’t have been impossible a decade ago or a week ago,” said Gibson, speaking by phone from his home in Vancouver. “What we used to think of as science fiction has become part of the kit we need to describe contemporary reality.”

Reality is a loaded term in Gibson’s writing, which has made his stories notoriously difficult to adapt — his debut novel from 1984, “Neuromancer,” has alone seen multiple failed attempts. “The Peripheral,” however, had the aid of Amazon’s deep pockets and of another acclaimed novelist, Scott B. Smith (“A Simple Plan”), who created and oversaw the series — his first time as a series showrunner.

Perhaps as important, it had as executive producers Jonathan Nolan and Lisa Joy, whose production company, Kilter Films, developed the series through Amazon Studios. As the creators and showrunners of HBO’s “Westworld,” based on the original film and screenplay by Michael Crichton, they were no strangers to sci-fi that barters in slippery notions of reality.

“It feels like a common thread between Gibson and Crichton,” Nolan said in a joint video interview with Joy, who is also his wife, and the director Vincenzo Natali. “Our world is in many not very subtle ways, but in some surprisingly subtle ways, really transforming underneath us.”