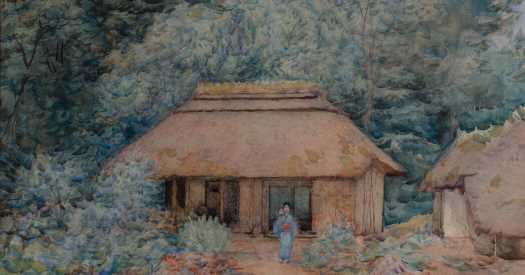 The 19th-century painter Edmund Walpole Brooke occupies a tiny, but durable place in art history. Not because of his own work, but because he offers a tantalizing look into the tragic last days of Vincent van Gogh.

That the two shared something close to friendship during the weeks before van Gogh committed suicide in July 1890 was a noteworthy feat given van Gogh’s embrace of isolation during his stay in Auvers-sur-Oise, a village on the northwestern outskirts of Paris.

But Brooke had grown up in Japan, a place that fascinated and inspired the Dutch painter. And so off they would go into the plein air on painting excursions, their relationship chronicled in a few letters that have made Brooke an intriguing figure to a van Gogh scholar who is still struggling to understand what led him to put a bullet in his chest.

“He is a very enigmatic person,” Tsukasa Kodera, a curator and professor of art history at Osaka University in Japan, said of Brooke, who has become a focus of his research. “He might have received letters from van Gogh, he might have received drawings or paintings as a gift — they might have exchanged works.”

Kodera has spent the better part of a decade, with limited success, hunting for information about Brooke. He has visited his gravesite in Japan and found records to establish that Brooke’s work was included in exhibitions during his lifetime at the Royal Academy of Arts in London and at the 1891 Paris Salon, and was the subject of at least two solo shows in Japan.

But finding a painting by Brooke has stymied Kodera, at least until now, perhaps. In April, Katherine Mathews, a thrift store enthusiast, happened upon a watercolor with the signature E.W. Brooke while rummaging through Warehouse 839, a shop in Saco, Maine, that specializes in everything from estate furniture to odds and ends.

She paid $45 for the image, which depicts a Japanese woman and a child. On her way home, curious to know just what she had bought, she stopped in a grocery store parking lot to look up this Brooke person on her iPad. She soon saw the van Gogh connection and later, with the help of her husband, John, made contact with Kodera.

The professor thinks they have probably discovered a rare thing, an original Brooke.

The painting in question is small, 13 by 19 inches, and the woman is toting the child on her back. They are depicted in front of a rural home surrounded by lush foliage. 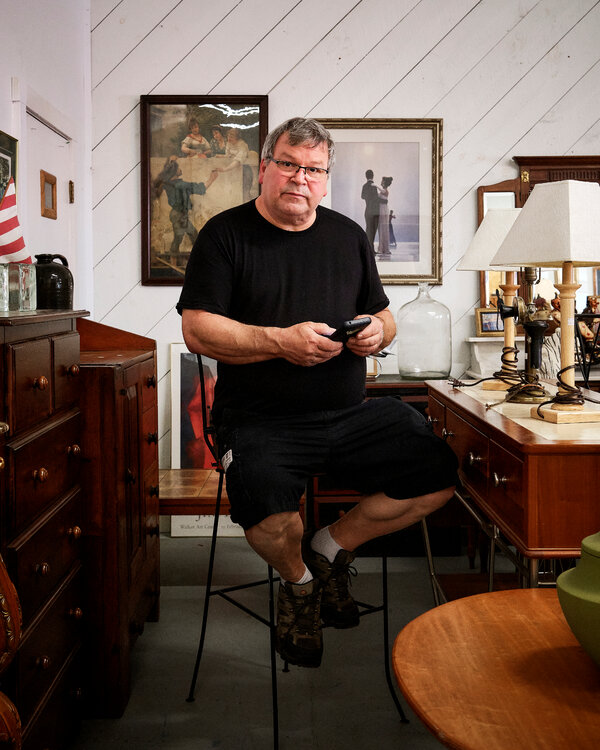 Kevin Keraghan, who owns the Maine shop, said he acquired the painting about 15 years ago from the estate sale of a family in New Hampshire. That family had originally come from California, which Kodera thought a good sign since two of Brooke’s brothers lived there.

For more than a decade, the watercolor hung in Keraghan’s home until he decided to put it up for sale. “My tastes changed,” Keraghan said.

Mathews said she was immediately drawn to the painting. It was the last item she selected that day. “The little face of the little girl peeking over the mother’s shoulder jumped right out at me,” she said.

Among the few glimpses available of van Gogh’s last days are the moments captured in letters he swapped with his brother Theo, his mother, Anna, his sister Willemien, and a couple of others. Brooke is one of the few people mentioned in their correspondence from a time when van Gogh, working at a typically feverish pace, created “Wheatfield With Crows,” “The Church at Auvers” and other paintings.

In the letters, van Gogh’s perspective on Brooke, who was then 24, appears to be that he is fine as a companion but is a middling artist, so far.

“He’ll probably show you some of his studies, which are rather lifeless, but however he does observe nature,” he wrote to Theo on July 2. “He has been here in Auvers for months, and we went out together sometimes, he was brought up in Japan, you would never think so from his painting — but that may come.”

Though he was no fan of Brooke’s artwork, and was famously irascible and mercurial, van Gogh enjoyed learning about Japan. He had been exposed to Japanese art in for the first time in Belgium in 1885 and became passionate about it. He collected, copied and festooned the walls of his studios with Japanese prints. Sometimes they even showed up in the background of his paintings. And he incorporated what he learned from Japanese artists, like Utagawa Hiroshige, into his own technique in subtle and inventive ways.

At one point, van Gogh’s obsession grew so deep that he began to see echoes of Japan in the landscape and lifestyle of Provence. “My dear brother, you know, I feel I’m in Japan,” van Gogh wrote to Theo in 1888, soon after arriving in Arles.

Brooke, born in Australia, was only a child when he moved to Japan, where his father, John Henry, worked as a reporter for and then director of the Japan Daily Herald, an English-language newspaper based in Yokohama. The father ultimately “came to occupy an important position in Yokohama’s expatriate society,” Kodera said in the catalog for an exhibition, “Van Gogh & Japan.”

But piecing together the rest of Brooke’s biography proved to be a major challenge. After two years of research, Kodera managed to find the artist’s grave at the Kobe Municipal Foreign Cemetery, surprisingly only 30 minutes away from the professor’s own home in Takarazuka.

“He had moved to Kobe having nothing at the age of 58,” Kodera said. “That is a very sad story.”

Similarly difficult has been finding any trace of Brooke’s work. A few years ago, the professor found a record indicating that the Redfern Gallery in Laguna Beach, Calif., had sold a painting by an artist named E.W. Brooke, but the gallery owner said he could not recall who had purchased it. A work by E.W. Brooke also showed up in the records for a 2014 estate sale in Los Angeles, but again the actual work proved elusive.

Kodera was as surprised as anyone when he received an email from Maine saying a painting by Brooke may have been located in a place where the artist has no known connection. Though the piece is still not fully authenticated — a particularly tricky task because there is little else by Brooke to compare it to — the early signs are very promising, according to Kodera.

A watermark on the painting’s paper has been found, identifying it as the product of J. Whatman, a firm based in England that made high-quality paper used by van Gogh and many other artists.

The content of the painting, too, suggests it was made by Brooke, Kodera said. During his research, he found a grave in Yokohama, where Brooke lived after he returned to Japan, marked “Ume Brooke,” who the professor thinks may be the painter’s daughter.

The girl in the picture found in Maine, he said, could very well be Brooke’s child, who died at the age of 6, and her mother.

One target of the search for Brooke is the possibility that somewhere, in the environs of Brooke’s life, there would be more evidence of van Gogh, maybe even an undiscovered work hidden away that was once a gift from the artist. But hopes for that kind of revelation, for finding even an additional example of Brooke’s work, were dented when Kodera found that Brooke’s home in Yokohama had been destroyed by the catastrophic 1923 earthquake and the terrible fires it spawned.

Now some optimism has resurfaced. If a Brooke can appear in an unlikely precinct of Maine, maybe there are others that have not been lost to time or disaster.

“This CAN be a breakthrough,” Kodera said in an email, using caps for emphasis, “to shed new light on the painter, and on Van Gogh’s last months.”