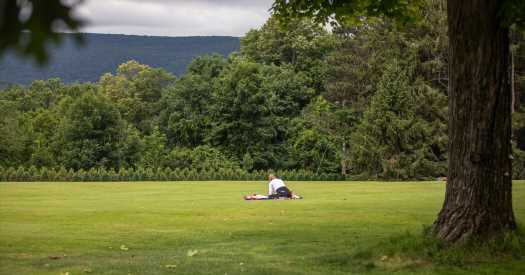 There won’t be the traditional, grand closing-night performance of Beethoven’s Ninth Symphony, with its stage full of singers. In fact, to reduce the risk of aerosol transmission of the coronavirus, there will be no vocal music at all at Tanglewood this summer.

But there will still be a lot of Beethoven, along with crowd-pleasing tributes to the composer John Williams and familiar guests like Emanuel Ax, Anne-Sophie Mutter, Joshua Bell and Yo-Yo Ma.

Tanglewood, the Boston Symphony Orchestra’s warm-weather home in the Berkshires, announced in March that after remaining closed last year because of the pandemic, it would open this summer for a six-week season — about half the usual length — with limited crowds and distancing requirements. On Thursday, the orchestra filled in the programming: heavy on appearances by its music director, Andris Nelsons, and with a focus on Beethoven, whose 250th birthday last year was muted because of widespread concert cancellations.

Nelsons will lead eight orchestral programs, including a Beethoven opener on July 10 featuring the “Emperor” Piano Concerto, with Ax as soloist, and the Fifth Symphony. On July 23, the Boston Pops will honor Williams, who turns 90 next year and is the Pops’ laureate conductor; the following evening, Mutter gives the premiere of his Violin Concerto No. 2, and on Aug. 13 Williams shares the podium for a night of film music. On July 30, the violinist Leonidas Kavakos does Beethoven trios with Ax and Ma, who also plays with the Boston Symphony under Karina Canellakis on Aug. 8. (Details are available at bso.org.)

Throughout the summer, performances will last no longer than 80 minutes, without intermissions, and all concerts will take place in the Koussevitzky Music Shed, which is open on the sides. The space, which usually holds thousands, will have a reduced capacity, as will the lawn that surrounds it — a favorite spot for picnicking. Tanglewood is waiting to announce what might go forward in late summer of its well-loved series of pop performers like James Taylor.

Students at the Tanglewood Music Center, the orchestra’s prestigious summer academy, will play chamber concerts on Sunday mornings and Monday afternoons, and programs are planned for the Tanglewood Learning Institute, a series of lectures, talks and master classes that began with great fanfare in 2019. The orchestra will host a two-day version of its annual Festival of Contemporary Music, July 25-26.

The Knights, a chamber orchestra, will be joined on July 9 by the jazz and classical pianist Aaron Diehl for Gershwin’s “Rhapsody in Blue” and selections from Mary Lou Williams’s “Zodiac Suite.” Among the Boston Symphony’s guest conductors will be Thomas Adès (the orchestra’s artistic partner), Alan Gilbert, Anna Rakitina and Herbert Blomstedt; soloists include the pianists Daniil Trifonov, Jean-Yves Thibaudet and Kirill Gerstein, and the violinists Baiba Skride and Lisa Batiashvili.

The Tanglewood season is part of the nationwide thawing planned for this summer of a performing arts scene that has been largely frozen for over a year. The Public Theater has announced that its venerable Shakespeare in the Park will go forward, as will Santa Fe Opera and the Glimmerglass Festival in upstate New York. On Thursday, the Aspen Music Festival and School in Colorado said it would move forward with a nearly two-month season.

But as they reopen, institutions are reckoning with sharp losses. As it celebrated the return of Tanglewood, the Boston Symphony said its current operating budget was $57.7 million, down from its prepandemic budget of over $100 million. The orchestra estimated that it has lost over $50 million in revenue in the last year.