This article is part of our latest special report on Museums, which focuses on reopening, reinvention and resilience.

The famous and powerful family that once controlled Florence provides the big name in “The Medici: Portraits and Politics, 1512-1570,” a large exhibition about to open at the Metropolitan Museum of Art in New York.

But sorry, Lorenzo, Giovanni and Catherine — the exhibition is not really about you, even if you were the best-known members of the dynasty that held sway for 300 years and inspired one of the most extraordinary periods in history, the Renaissance.

At least, it’s not simply about you.

The show will bring together more than 90 works — drawings, engravings, sculptures, manuscripts, even medals — from the time when Florence was transformed from a republic with elected officials to a duchy ruled by Cosimo I de’ Medici.

But look who is on the cover of the 328-page catalog prepared for the exhibition — not any of you, but Lodovico Capponi. He was the young noble who got into a dust-up in church, during a Mass, with — scandal! — the husband of a woman he fancied. Cosimo I is relegated to the back cover, even though he reigned for more than a third of the 16th century.

Capponi, whose portrait is among those in the exhibition, was not given such prominent placement because of the commotion at the communion rail. He is there because the exhibition is about how you, the Medici family, used portraiture as a political tool, favoring artists who painted your allies and helped advance your aristocratic ambitions. 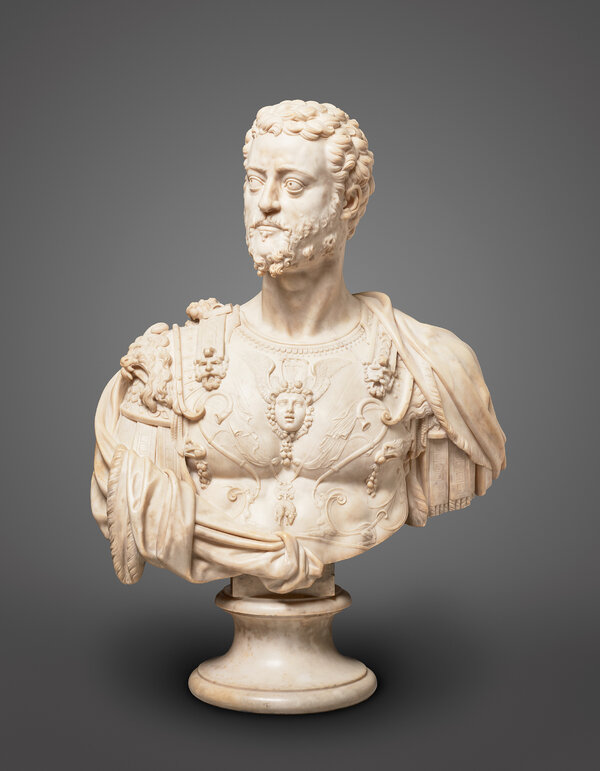 You — especially you, Cosimo I — enlisted the leading artists of your time, Raphael and Michaelangelo among them, to further your interests. “Portraits and Politics” looks at the chapter of the Renaissance that followed da Vinci, Botticelli and Michelangelo — the chapter when Florentine portraitists became influential. The exhibition tells how they conveyed the changing sense of what it meant to be a Florentine, especially a rich and powerful one, as Florence emerged as the cultural and financial center of Europe.

That artistic connection paid off handsomely for you: Even when you were long gone, the narrative that the artists created to tell your story “remained solid and highly influential,” the art historian Sefy Hendler explained in the catalog.

There are two paintings by Raphael in the show — after all, he painted you, Lorenzo di Piero, and you, Giuliano. And Michelangelo once lived in the palace. During a blizzard in 1494, he was summoned by someone from your family to sculpt a snowman. But in the years covered by the exhibition, he was busy in Rome, not Florence.

“The Medici: Portraits and Politics” also looks at artists who are not necessarily household names now, but were in your households: Agnolo Bronzino, who painted young Capponi; Jacopo Pontormo; and Francesco Salviati; along with the sculptor Benvenuto Cellini. The catalog said they — but especially Bronzino — “endowed their works with an erudite and self-consciously stylish character that made Florentine portraiture distinctive.” But there were nuances. Salviati’s work showed the influence of Venice and Rome and masters like Titian and Raphael. The catalog said Bronzino represented “Florentine purity.”

That is no doubt what some in your family prized. And what a family it was. Your family was so influential but also so complicated. You took art and banking to levels never imagined before. Four of you became popes. In the 17th century, you were patrons of Galileo. And one of you — “a remote, collateral descendant of the magnificent Lorenzo,” according to one historian — backed the instrument maker who invented the piano.

Yet there was so much drama! Assassinations. Rebellion. Machinations. And nicknames. Everyone knows you, Lorenzo, as Lorenzo the Magnificent. But some of your relatives had less-exalted handles. Your father — known as Piero the Gouty — is not to be confused with your son Piero the Unfortunate.

And you, Cosimo I — you rose to power after an assassination (of a cousin) in the 1530s, when Florence had lost its identity and become a pawn in European politics. You made Florence matter again, even if you were a tyrant, and Florence was grateful.

“The brilliance of Cosimo I de’ Medici was the way he employed culture both to create a sense of legitimacy and as a means of assuring Florence a place in a transformed political map,” said Keith Christiansen, the chairman of the department of European paintings at the Met. “He nurtured the idea of Florence as the intellectual powerhouse of the Renaissance and the Medici as the key players.”

That shaped the exhibition, focusing it on “that new court culture and how it affected the way the Florentine elite had themselves depicted,” Mr. Christiansen said.

But are you relevant to us in the 21st century? Well, you certainly know about pandemics. You survived the plague, as the wealthy did. But Max Hollein, the director of the Met, answered a question about your aptness differently. He said your skill — “constructing, through patronage,” your identity — leads directly to the 21st century.

“We are surrounded by imagery that is constructed — we expect that in any kind of election,” he said. “For us to see how the High Renaissance rulers cemented their power through commissioning art and associating with artists and culture is important. A fairly calibrated image was being presented to enhance the idea of their rulership even then. That gets forgotten. These works are taken out of context and put up in museums to be admired for their aesthetic merits.”

There is no question that the paintings were, and are, beautiful, but they were “propaganda” for you, he said. “Cosimo didn’t only commission these works and foster these relationships just because he loves art. He had a very strategic purpose.”

But the exhibition is also about the current moment, because the coronavirus pandemic shaped it — from the delayed opening to the research that went into the book prepared for the exhibition, edited by Mr. Christiansen and the Florentine scholar Carlo Falciani.

Normally, Mr. Christiansen said, he would have traveled to the institutions that were lending works for the exhibition — “not only to sit down with the directors to explain what the project was,” he said, “but to take notes about the pictures and talk to the conservators” about details like how the paintings could be hung. “That was completely out” because of travel restrictions in the pandemic, he said.

The limitations on travel also dictated the two-month delay in the opening of the exhibition, originally scheduled for April and now set for June 26. Late last year, Mr. Christiansen said, he and other Met officials realized that travel would be restricted through the early months of 2021. That would play havoc with the arrival of paintings that could travel only with couriers to assure their safe delivery. They postponed the opening, betting the pandemic would wane and the couriers could travel by late spring.

The pandemic that you Medicis endured was more devastating — by some estimates, the plague killed 25 million people, a third of the population in 14th-century Europe.

Your relative Alessandro was installed as the first duke of Florence in 1532, after the city had been ravaged, so you knew something about social distancing. Perhaps that is not what you called it, but it is the term that the scholar Elizabeth Cropper used to explain what 10-year-old Lorenzo Lenzi was doing in the countryside beyond Florence when Bronzino painted his portrait. Lenzi had gone there with his tutor “to escape the devastating plague through social distancing,” she wrote in the exhibition catalog.

Mr. Christiansen drew some comparisons between Bronzino and Salviati and a modern-day artwork: The 2018 portrait of President Barack Obama, by the American artist Kehinde Wiley. A pensive-looking Mr. Obama was seated in front of a bright background of greenery that included African blue lilies, representing Kenya, where his father was born, and jasmine, for Hawaii, Mr. Obama’s birthplace.

The Obama portrait “reminds us that the visuals of culture can be useful,” Mr. Christiansen said. “Most people look and say, ‘What a pretty flowered background — wonder what the artist is doing.’” He also quoted Mr. Obama, who said Mr. Wiley’s earlier portraits had been striking for “the degree to which they challenged our conventional views of power and privilege.”

“I have a feeling Cosimo felt the same about the ways in which he had himself depicted,” Mr. Christiansen said.