In the middle of St. Vincent’s last album, the sleek and slinky “Masseduction” from 2017, there is an uncharacteristically sparse piano ballad called “Happy Birthday, Johnny.” Unlike a lot of St. Vincent songs, this one is almost provocatively simple: just a lovely melody that Annie Clark’s voice imbues with warm, weary pathos.

It tells the apparently autobiographical story of two New York bohemians who’d once been inseparable, before the narrator got famous and her hard-living pal Johnny ended up on the street. In the last verse, he returns to hit her up for money. She hesitates, and he accuses her of “acting like all royalty” and severing their bond for good: “What happened to blood, our family/Annie, how could you do this to me?”

That last line hits like an electric shock. Clark has always maintained a performance artist’s calculated caginess regarding how much of her private self she is willing to offer up in her music, and St. Vincent songs have never exactly presented themselves as first-person confessionals. Instead, Clark delights in world-building and role-playing, assigning each album its own highly stylized attitude, hairdo and mood board of references.

Ever an interrogator of gender norms, Clark has used this technique to push back against the limiting assumption that female artists must always make “personal” music. And yet, with its first-name-basis and no-frills arrangement, something about “Happy Birthday, Johnny” feels especially raw. The New Yorker writer Nick Paumgarten asked Clark who Johnny is — a fair question, it seemed, about a song that telegraphed such candor. But Clark demurred. “Johnny’s just Johnny,” she answered. “Doesn’t everybody know a Johnny?”

When Clark announced the title of her sixth solo album, “Daddy’s Home,” it appeared at first like it might be another “Happy Birthday, Johnny” moment — a sudden, uncharacteristic pivot to straightforward autobiography. Cheeky as it is, the phrase does point quite directly to an event in Clark’s personal life: Her father, who in 2010 was imprisoned for his role in a stock-manipulation scheme, recently got out of prison. Clark has studiously avoided addressing the matter until now, though in interviews promoting “Daddy’s Home,” she has suggested for the first time that her emotional response to her father’s incarceration informed, however obliquely, her unsettling 2011 masterpiece “Strange Mercy.”

That record was deliciously creepy and anxiety-ridden, but a decade later, on “Daddy’s Home,” Clark is more inclined to address her father’s experience with a canted humor and swaggering bravado. “I signed autographs in the visitation room,” she sings on the vampy title track, “waiting for you the last time, inmate 502.” The song struts woozily, and between the lines, it wonders: Has the daughter inherited more of the father’s vices than she wants to admit? And if so, who’s her daddy now? 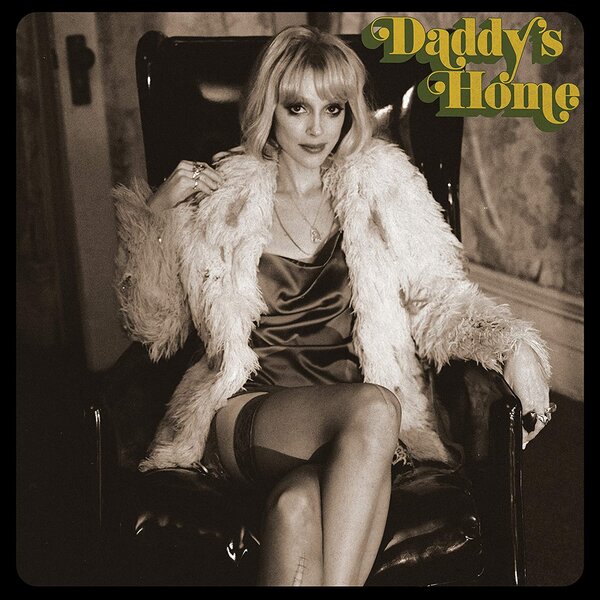 Clark and her co-producer, Jack Antonoff, have clearly had fun with the creation of this finely tuned alternate universe, but at a point, its many detailed references start to feel like clutter, preventing the songs from moving too freely in their own ways.

The yawning single “The Melting of the Sun” is weighed down by constant, wink-wink verbal and sonic quotations of ’70s rock; “Hello from the dark side of the moon,” Clark sings, as her guitar wolf-whistles like Steve Miller’s in “The Joker.” “Like the heroines of Cassavetes, I’m under the influence daily,” she sings, a little too on the nose, on the drifting “The Laughing Man.” One indelible highlight is the gorgeously immersive psychedelia of “Live in the Dream,” but it is also a Pink Floyd-indebted slow-burner that begins with an echoing, “Hello …” Get it? Too often, these references feel as though they’re there just for the sake of cleverness. As a result, more frequently than it invents or reveals, “Daddy’s Home” gestures.

Eventually, though, across its six-and-a-half minutes, “Live in the Dream” manages to drill down a little deeper. “Welcome, child, you’re free from the cage,” Clark sings in a gentle, hazy voice, as though she’s greeting someone waking up from a long coma. In these moments, “Daddy’s Home” nods to the psychotherapeutic concept known as “reparenting” — a process of realizing the needs that were not met in one’s own childhood and then becoming, in a sense, one’s own daddy. It’s rich territory to mine.

Later in the record, on the searching but still humorous “My Baby Wants a Baby,” Clark revisits this idea and wonders whether or not she wants to enter that endless cycle of familial trauma. “What in the world would my baby say, I got your eyes and your mistakes?” she sings. “Then I couldn’t stay in bed all day/I couldn’t leave like my daddy.”

With its warm Wurlitzer and Greek-chorus backing vocals from Lynne Fiddmont and Kenya Hathaway, “My Baby Wants a Baby” is also framed in ’70s rock styles. But unlike some of the album’s flatter material, this song doesn’t feel impeded by its instrumentation and conceptual ideas. Instead, it seems to be discovering and revealing as it goes along.

It’s a relatively rare moment, though. As a whole, “Daddy’s Home” ends up feeling like a record that wants it both ways: It flirts with and even valorizes autobiographical disclosure only to retreat from it and back into a place of light pastiche when things risk becoming a little too messy.

One of the most surprising moments comes during “The Melting of the Sun,” when Clark shouts out three of her musical heroes: Nina Simone, Joni Mitchell and Tori Amos. Like Clark, all three are known for virtuosity. But unlike Clark, they’re also known for the intense, fearless emotionality of their music and the way it can smudge the line between private emotion and public performance.

If these are her lodestars, perhaps they can provide a pathway toward a genuinely revelatory new direction. Artifice can of course project larger truths, but it can just as easily become a trusty hiding place. On “Daddy’s Home,” Clark sometimes creeps up to her edge, only to return to that playfully distorted hall of mirrors that has become her comfort zone.