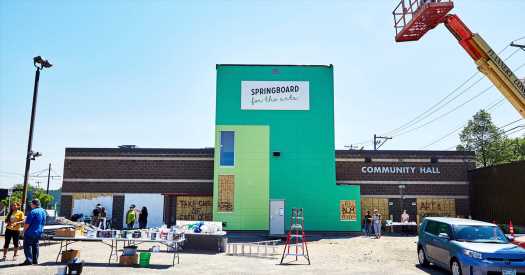 In San Francisco, public officials have announced a pilot program that will provide a monthly stipend to artists. The mayor’s office recently unveiled the initiative, city payments that were approved by the arts commission, which will provide a guaranteed monthly income of $1,000 over six months to 130 eligible artists.

A similar experiment started in St. Paul, Minn., this week. There, a nonprofit organization is working with the city to disburse monthly $500 checks to 25 local artists for the next 18 months. Springboard for the Arts, the organization running the initiative, with funding from two foundations, said it hoped a successful program could change the national conversation.

And more programs, not limited to arts workers, are springing up in cities like Oakland, Calif., and Atlanta, whose leaders are part of a 41-member coalition, Mayors for a Guaranteed Income. The coalition says that providing such an income will improve racial and gender equity. (New York has no such plan in the works, a spokesman for the Department of Cultural Affairs said last week.)

Interest in guaranteed income — or universal basic income — has built over the last year as a potential solution to the lopsided economic effects of the pandemic.

“We knew this health crisis would impact artists, and artists of color in particular,” San Francisco’s mayor, London Breed, said in a statement. “If we help the arts recover, the arts will help San Francisco recover.”

San Francisco has other such programs — one that provides payments to San Franciscans training as emergency medical technicians, and another that’s part of a $60 million initiative to invest in Black children and families.

Since opening the application portal for artists on March 25, the Yerba Buena Center for the Arts, which is administering the guaranteed income program on behalf of San Francisco, said it has received more than 1,800 responses. (The deadline for applications is April 15.)

Deborah Cullinan, the organization’s chief executive, said that if people in the arts are unstable, “to my mind, I think it means that we are not stable. An organization is only as stable as its core community.”

Cullinan said that she hoped that data from the program could be used to inform the national agenda, and that she already had interest from the federal government.

“It’s about finding new and innovative ways to address the economic insecurity of our sector,” Cullinan added.

In St. Paul, the McKnight and Bush Foundations have helped get the guaranteed-income program off the ground. Laura Zabel, Springboard’s director overseeing the project, said that the monthly payments would help artists afford food and rent. The recipients of the stipends will be chosen from a pool of previous recipients of the organization’s coronavirus emergency grants. The director added that at least 75 percent of recipients would be people of color.