A familiar TV face for years, he appeared on many of the most popular prime-time shows of recent decades. 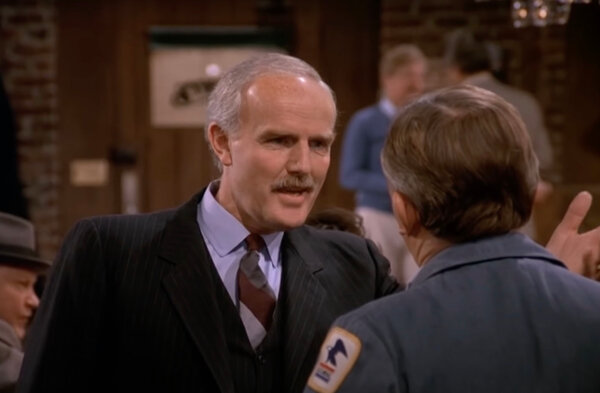 Richard Roat, a versatile character actor whose half-century-long career was punctuated by notable guest appearances on three of the most popular sitcoms of recent decades, “Cheers,” “Friends” and “Seinfeld,” died on Aug. 5 in Newport Beach, Calif. He was 89.

Kathy (Arntzen) Roat, his wife and only immediate survivor, said the cause was a heart attack. She said Mr. Roat, who lived in Glendale, died in a condo while on vacation.

On a 1985 episode of “Cheers,” as the imperious boss of the barstool habitué Norm Peterson (George Wendt), he threatened to fire Norm if he didn’t accept a promotion (and raise) to become the company’s “corporate killer” — the person who terminates people.

“Studies have shown that it’s particularly humiliating when you’re fired by someone who is clearly and markedly superior to yourself,” Mr. Roat’s character tells Norm coldly. “That wouldn’t be the case with you, Norman. You’re just an ordinary Joe. We checked out your home life. You have absolutely nothing that anyone could possibly envy or resent.”

In 1996, on “Seinfeld,” Mr. Roat was a dermatologist who labeled Elaine (Julia Louis-Dreyfus) a “difficult” patient when she sought treatment for a rash. His character turned from friendly to stern when he checked her patient history.

“Well, that doesn’t look serious,” he says, barely examining her. “You’ll be fine.” He then adds notes to her history when she complains that the rash is “really itchy.”

And on “Friends,” in 2000, he was a professor at the college where Ross (David Schwimmer) taught. At one point he tells Ross that he was violating campus rules by dating a student.

“They’re going to fire you,” he says.

Mr. Roat worked primarily in television, starting in 1962 with two very different series about police officers: the sitcom “Car 54, Where Are You?” and the drama “Naked City.” He was a regular on the daytime soap opera “The Doctors” from 1963 to 1964, and over the next 45 years was seen on comedies like “The Mary Tyler Moore Show,” “Murphy Brown” and “Ellen” and dramas like “The Fugitive,” “Columbo,” “Matlock” and “Dynasty.”

In a 1986 episode of “The Golden Girls,” as the boyfriend of Rose (Betty White), he dies in bed after they sleep together.

He also worked regularly in regional theater. He starred with Jo Anne Worley in Ken Ludwig’s theatrical farce “Moon Over Buffalo” at the Pasadena Playhouse, and in William Luce’s one-man show “Barrymore,” about the actor John Barrymore, at the Dorset Theater Festival in Vermont. He played the title role, based on Lyndon B. Johnson, in Barbara Garson’s political satire “Macbird!” at the Players’ Ring Gallery in Los Angeles, and a married character in Mart Crowley’s “The Boys in the Band,” about a group of gay men, at what is now the Montalbán Theater, also in Los Angeles.

In 1962 he played Mark Antony in the New York Shakespeare Festival’s production of “Julius Caesar.”

Richard Donald Roat Jr. was born on July 3, 1933, in Hartford, Conn. His father was a glazier, and his mother, Lois (Bowan) Roat, was a homemaker.

After graduating with a bachelor’s degree from Trinity College in Hartford in 1956, Mr. Roat acted with the Mark Twain Masquers and other local theatrical groups. He also earned a living by driving a bakery truck and holding other odd jobs.

In 1961 he made his Broadway debut as a replacement for Michael Ebert in “The Wall,” a play about Jews in occupied Poland during World War II.

Mr. Roat played Dr. Jerry Chandler during 172 episodes of “The Doctors” and told The Portland Press Herald that he felt grateful for the opportunity to act regularly.

Mr. Roat had another long-running role, which he pursued as an actor and continued after he retired that year: as a tax preparer for people in the entertainment business. During a slow period in his acting career in the late 1960s, he took a job in an accountant’s office. On April 15 of that first year, the accountant had a nervous breakdown, Kathy Roat said, and Mr. Roat “took some tax forms and decided to become a tax preparer.”