The first movement is of a hand drawing a square with the thick tip of a blue marker. As that same singular hand — it belongs to the choreographer and dancer Trisha Brown — turns the square into a three-dimensional structure, she says, “I imagined a cubicle form to begin with.”

Taken from a 1980 television program, “Frames of Reference: Dancing on the Edge,” this brief yet poignant introduction to “Locus Trio,” the first work on a new digital program by the Trisha Brown Dance Company, transports us instantly into Brown’s mind, which was a witty and wonderful place. “It is not exactly a cube,” she continues. “Its height is elongated to accommodate a standing person.”

And it wasn’t exactly real — it was invisible. Within this imaginary structure, a grid of layers, a dancer in “Locus” (1975) negotiates the performance space. “Locus Trio” (1980), one of three dances filmed at Judson Memorial Church for the company’s virtual season presented by the Joyce Theater, starts a journey into Brown’s early explorations of movement invention. Credited in concept, design and editing to Daniel Madoff, the film also features a fourth dance, the elegant “Geometry of Quiet” (2002), which was shot at the Joyce in 2017.

But the main setting, at Judson Church, makes reference to another time, when Brown was a founding member of Judson Dance Theater, the 1960s experimental collective that helped to usher in postmodern dance. Brown, at 80, died in 2017.

It’s not just her brilliant mind that is missed — the way she could envision a dance’s structure — but her movement, too: unmannered and slippery but utterly precise. No body part is ignored. As she told the choreographer and filmmaker Yvonne Rainer in a 1979 interview, “I’m always looking for what we’ve left out — the backside of the knees, for example.”

In “Locus Trio” (1980), Cecily Campbell, Kimberly Fulmer and Jamie Scott navigate the space while moving both in unison and out; crouching to the floor and springing up, they sway and lean using their arms as levers to create a never-ending flow of momentum. Their bodies — refined and buttery — may drip and swerve, yet they never crash. 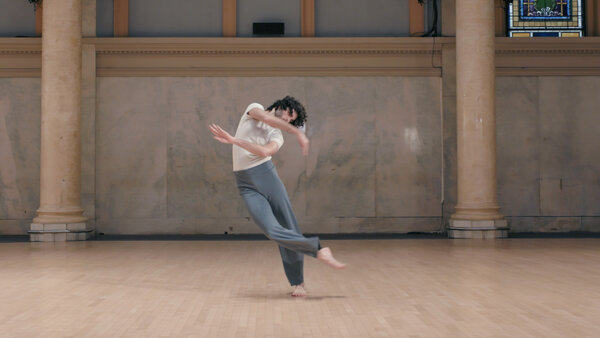 In the lush, wild solo “Watermotor” (1978), Marc Crousillat — as fine a dancer as he is — has a lot to live up to. Moments before his performance, we see Brown dancing a version of the work in another snippet from “Frames of Reference,” in which her precision and looseness, two qualities seemingly at odds, mingle in the most natural way.

Crousillat, with his shaggy hair and powerful limbs, cuts an impressive figure as he brings his own sense of unruliness to the solo, which was inspired by imagery from Brown’s childhood. In it, he is impulsive — prancing, galloping and kicking a leg forward with force only to let it settle into its weight as it falls. But here and in “Locus Trio,” there is a tendency for the camera to get busy, suddenly zooming in or out and interrupting the dance’s flow.

It also interferes with “The Decoy Project,” conceived by Carolyn Lucas, the group’s associate artistic director, and Scott, who is joined by fellow company members Campbell, Fulmer and Amanda Kmett’Pendry, as well as the guest dancers Hadar Ahuvia, Raven Blue, Jennifer Payán and Hsiao-Jou Tang. In this work, unlike the others, the dancers wear masks.

“The Decoy Project” takes inspiration from Brown’s groundbreaking “Glacial Decoy” (1979), her first work for the proscenium, in which four dancers sweep across the stage in a manner that leads to the impression that there are more in the work. Over time, Brown herself reconfigured the choreography of “Glacial Decoy” to fit different spaces. In 1980, she created a version of it for a performance at 55 Crosby Street; she also arranged a version of it for WNET’s “Dance in America” series on a broadcast called “Beyond the Mainstream,” which aired on public television that same year.

The new arrangement, described in the program as “a marriage between an adaptation of the work Trisha created for WNET and the original ‘Glacial Decoy’ form,” involves entrances and exits from both sides of the frame while playing with the space’s depth.

While it glides along, sometimes delightfully — in one memorable moment, Scott and Tang crash into each other, chests first — the overall presentation has a dizzying effect as the camera shifts perspectives. “Glacial Decoy” is about seeing the breadth of the stage; at times, because of its editing and angles, “The Decoy Project” feels forced, more labored than smooth.

But it’s worth seeing for the dancers. The expanded cast was instituted in response to the pandemic; it was a way to get more dancers into the studio. Watching these different bodies thread their way in and out of Brown’s choreographic web speaks to determination, joy and grit — it’s dancing in difficult times.