Cities bury their histories beneath them, though the past persists in plain sight. Here in New York, Wall Street whispers of a long-ago barrier, Canal Street commemorates forgotten waters, and Madison Square Garden, which has no garden, conjures former pleasure centers.

Los Angeles has its own history — of dreams, disaster and displacement — and a talent for paving over it. “Underneath the Freeways of Los Angeles,” an immersive show from the Echo Theater Company, summons a particular incident: the construction of the East Los Angeles Interchange, perhaps the busiest freeway interchange in North America. To build it, the city razed portions of Boyle Heights, a multicultural enclave. In an infrastructure decision that would shatter any Jane Jacobs fan, urban planners ran a particular stretch of freeway above and through the lagoon of Hollenbeck Park.

“Underneath the Freeways,” written by Matthew Paul Olmos and directed by Michael Alvarez, takes place in 1960, the day after two bodies were discovered floating in that lagoon, in the shadow of the concrete piers. The victims, a young white man and a younger Latina woman, had both experienced blunt force trauma. (The murders are fictional.) The audience, divided into breakout rooms, is tasked with solving the crime. Serially, the groups question a quintet of suspects — an artist, an activist, a mother, a drifter, a freeway-system employee. During each interrogation, participants try to discern intentions and disprove alibis. 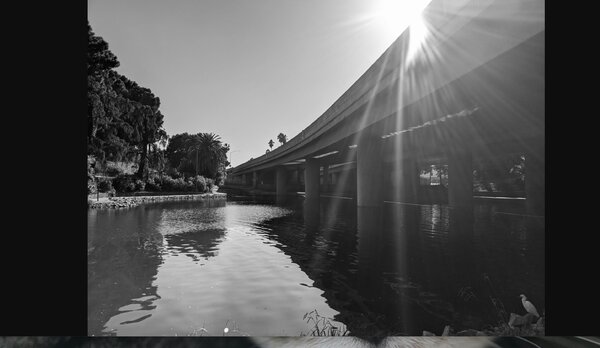 A day before the show, participants received prompts asking them to imagine themselves in the world of the play. “Whom do you associate with?” one document reads. “What neighborhood do you live in? What are your political beliefs?” Costumes are encouraged, it adds, though not required. As my performance began at 10:30 p.m. (blame a West Coast curtain time) and putting on fancy clothes for late-night events is something I gave up, willingly, once I had children, I kept my sweater and leggings. I was still briefly mistaken for a suspect. “No,” I stammered when a participant began to question me. “I’m just a person.”

But was I? Was anyone? Because the play borrows structural elements from murder-mystery dinners and role-playing games, many audience members, playing the roles they had assigned themselves, treated “Underneath the Freeways” as a game that needed winning. Many attendees questioned the suspects aggressively. And when certain characters offered narratives of loss and dislocation, their stories were answered with distrust rather than deep listening. (Me? I couldn’t get a word in, though I did put a question about the particulars of the blunt force trauma in the chat.)

I often felt uncomfortable within my breakout room. Had we not all lived through last summer? Did we really want to playact police-like interrogators? Could we not meet these characters with empathy? I don’t mean to scold the audience; the more relentless participants did what “Underneath the Freeways” asked of them, which points to a schism at the heart of the play. Olmos and Alvarez want to give voice to marginalized people, but they also ask us, explicitly, to distrust those voices.

“Keep them talking,” a strict woman (Amy K. Harmon) says in the opening scene. “Notice if they slip up. Notice what they’re trying to avoid.”

Experiencing “Underneath the Freeways,” I thought of another immersive show, “Rio Records,” which I’d seen in January. That piece was also inspired by a dark chapter in Los Angeles’s history of civil engineering: the paving of the Los Angeles River. “Rio Records” was messy, inchoate and all over the (city) map. But it met its subject with generosity and invited generosity in return. “Underneath the Freeways,” on the other hand, demands suspicion and rewards it.

The East Los Angeles Interchange is a marvel of engineering. It is also a deeply dehumanizing structure. And even as “Underneath the Freeways” wants to excavate the stories that underlie those piers, it is dehumanizing, too.

Underneath the Freeways of Los Angeles
Through April 26; echotheatercompany.com.