Patrick Sky, who established himself as part of the Greenwich Village folk scene of the mid-1960s with smooth guitar-picking and a Southern twang that could be melodic or sassy, then became adept at playing, and making, the notoriously difficult instrument known as the uilleann pipes, died on May 26 in Asheville, N.C. He was 80.

His wife, Cathy Larson Sky, said the cause was cancer. He died at a hospice center and lived in Spruce Pine, N.C.

Mr. Sky’s best-known song was probably “Many a Mile,” a weary-traveler lament that opened his debut album, titled simply “Patrick Sky,” in 1965. It was covered by others, including Buffy Sainte-Marie, his girlfriend early in his career. He was also skilled at “sardonic, satiric rags and blues,” as The New York Times put it in 1965, and as his career advanced, those elements of his repertoire became more caustic.

That aspect of his music culminated in what fRoots magazine called “the most politically incorrect folk album ever,” a 1973 release titled “Songs That Made America Famous.” The track titles — “Vatican Caskets” and “Child Molesting Blues” among them — convey the tenor of the record.

By then, though, Mr. Sky, who was of both Irish and Creek Indian heritage, had turned his attention to the uilleann pipes, perhaps the most difficult instrument to play in the arsenal of Irish music, after meeting the master piper Liam O’Flynn at the Philadelphia Folk Festival in the early 1970s. Mr. Sky learned not only to play the instrument but also to make it, something he did for the rest of his life, helping to revive a faded art. In 2009 he and his wife, a fiddler, made an album, “Down to Us.”

Patrick Leon Linch Jr. (who legally changed his name in the 1960s) was born on Oct. 2, 1940, in College Park, Ga., outside Atlanta. His father was a munitions worker, and his mother, Theron Rutilla Heard Linch, was a registered nurse.

Patrick grew up in Georgia, Louisiana and other parts of the South and was interested in music from an early age. In 1957 he enlisted in the Army, serving in an artillery unit until his discharge the next year.

“I began playing at little coffeehouses,” he said in an interview for the book “Folk Music: More Than a Song” (1976), “eventually finding my way to Florida.”

There he met Ms. Sainte-Marie, and a few years later, when she went north to New York, he did, too. His Southern sensibilities sometimes made for an amusing fit with the Greenwich Village folkies he began socializing and playing with. His wife said he used to tell about the time the musician Dave Van Ronk and other friends offered to take him out for soul food, a term he didn’t know. At the restaurant, when the collards and fatback, cornbread, fried pork chops and such arrived, his friends asked what he thought.

As folk music enjoyed a boom, a music newsletter called Broadside began sponsoring “singing newspapers,” as they were described — concerts at which a string of performers would sing topical songs, often written for the occasion. Mr. Sky played at the first one, at the Village Gate in 1964, to a crowd of 500; Pete Seeger was the master of ceremonies, and the other performers included Phil Ochs, Tom Paxton, Jack Elliott and Ms. Sainte-Marie.

In February 1965, Mr. Sky played a bigger venue, Town Hall, in Midtown. In his review, Robert Shelton of The Times called him “an important new folk-song talent.” Mr. Sky went on to play to 2,400 at Carnegie Hall in December 1966. 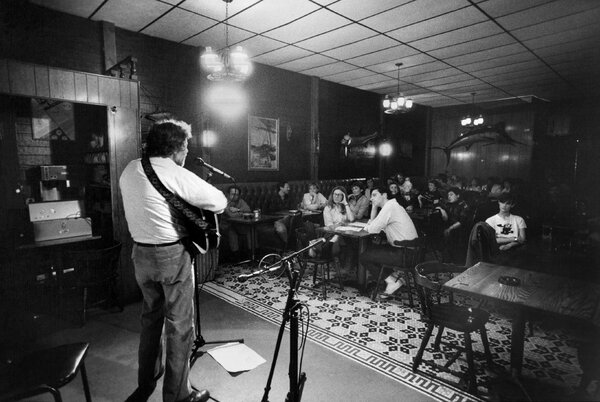 His second album, “A Harvest of Gentle Clang,” had been released that year. Mr. Sky became a regular at folk festivals, clubs and colleges, and two more albums followed before the decade’s end: “Reality Is Bad Enough” in 1968 and “Photographs” the next year.

But he began performing less and less, and after “Songs That Made America Famous,” he retired for a time, though he began doing shows again in the 1980s, adding the pipes to his performances.

Few people played that instrument at the time. In a segment filmed several years ago for “Around Carolina,” a local cable show, Mr. Sky, who lived in Rhode Island for a while, joked about his unusual obsession.

“I used to tell people I was the best piper in all of New England,” he said, “which is true because I was the only piper.”

He continued to perform with his wife at pipers’ festivals and other events until 2018, when he was found to have Parkinson’s disease.

Mr. Sky earned a bachelor’s degree in poetry at Goddard College in Vermont in 1978 and a master’s degree in folklore at the University of North Carolina at Chapel Hill in 1993.

Two early marriages ended in divorce. He married Cathy Anne Larson in 1981. In addition to his wife, he is survived by their son, Liam Michael Sky; a son from an earlier marriage, Marcus Linch; and three grandchildren.