Nick Carter was visibly overwhelmed with emotion as his Backstreet Boys bandmates paid tribute to his brother Aaron Carter, who has died.

The I Want It That Way singer went ahead with the group’s tour show at London’s O2 Arena on Sunday, despite Nick’s grief.

His younger sibling Carter died at the age of 34 and was reportedly found in a bathtub at his home in California on Saturday.

Less than 48 hours after the news broke, Nick, 42, joined his Backstreet Boys bandmates Howie Dorough, Kevin Richardson, AJ McLean and Brian Littrell on-stage at the O2. The group paused the show after performing the track No Place as a montage of photos of Carter throughout his life played on the big screen.

Leading the tribute, Kevin told the packed-out audience: ‘That song is very special to us because that song is about family. Everybody in here, we all grew up together. We’ve been through highs and lows, ups and downs. 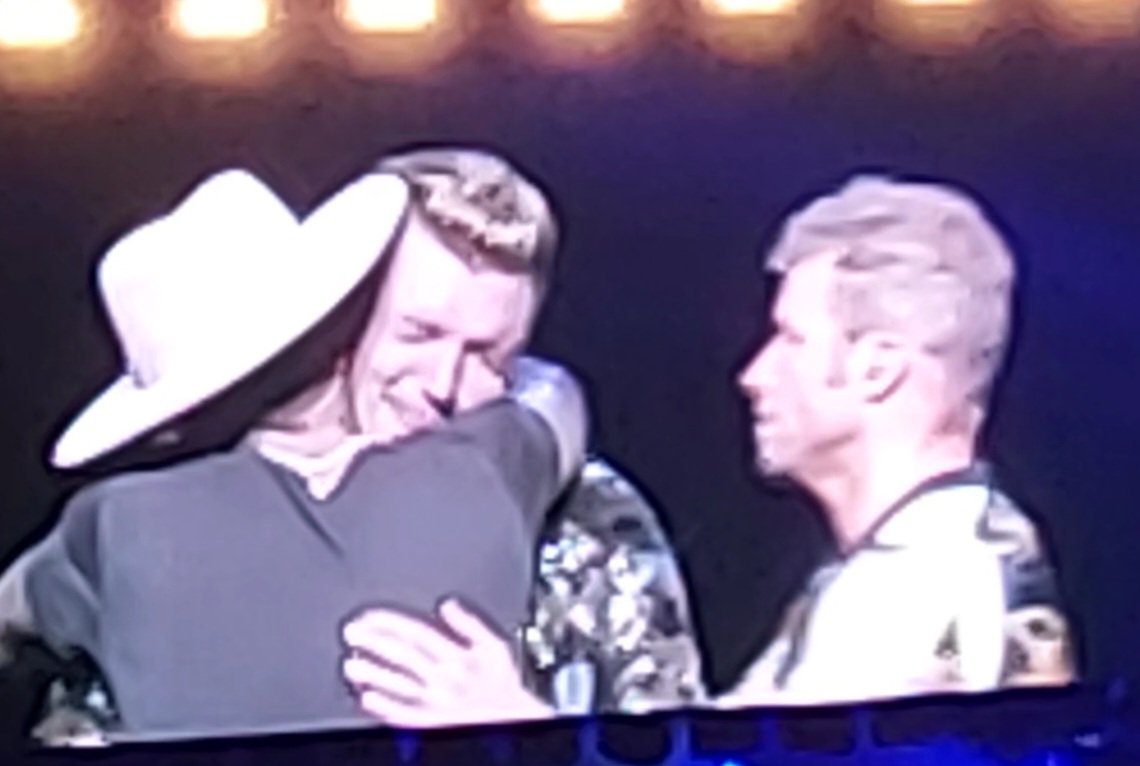 In footage taken from the crowd, Nick was seen standing silently while evidently fighting back tears, prompting AJ, Brian and Howie to rush over to give him a warm hug.

Kevin continued: ‘Tonight we’ve got heavy hearts because we lost one of our family members yesterday, and we just wanted to find a moment in our show to recognize him.

‘Nick’s little brother, Aaron Carter passed away yesterday at [34] years old. He’s a part of our family. We thank you guys for all the love and the well wishes and all your support.’

As the group gathered themselves and wiped away their own tears, Howie added: ‘We’d like to dedicate this song to our little brother, Aaron Carter. … May he rest in heaven,’ before launching into another song.

Hours before hitting the stage, Nick spoke out for the first time to pay tribute to Carter in a heartfelt post.

‘My heart has been broken today. Even though my brother and I have had a complicated relationship, my love for him has never ever faded,’ Nick wrote alongside a series of photos of him and Carter together.

‘I have always held onto the hope, that he would somehow, someday want to walk a healthy path and eventually find the help that he so desperately needed.

‘Sometimes we want to blame someone or something for a loss. But the truth is that addiction and mental illness is the real villain here.’

He continued: ‘I will miss my brother more than anyone will ever know. I love you Chizz, now you get a chance to finally have some peace you could never find here on earth….God, please take care of my baby brother.’

The siblings, while close growing up, had a strained relationship towards the end of Carter’s life, with Nick filing a restraining order against him in 2019 after witnessing ‘alarming behaviour’.

Carter denied the charges against him, saying he was ‘astounded’ by the accusations and later claimed he would be ‘just fine’ without his family.

The I Want Candy singer’s twin sister Angel, who also filed a restraining order against him, paid tribute to her brother and said she hopes he’s ‘at peace now’.

A cause of death has not been given and police have said their investigation is continuing.