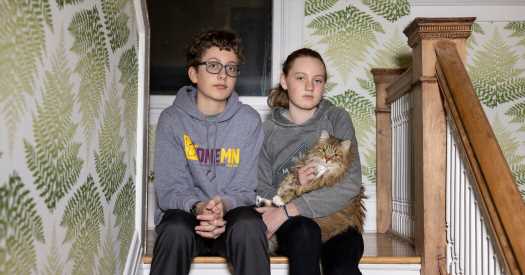 The day after my teenagers got their first shots in the Moderna Covid vaccine trial, I found my 13-year-old daughter, Zoe, sprawled out in bed during a distance-learning art class. Under a pile of blankets, she said she had chills. My heart skipped a beat. Any other time I would have worried about her missing school or Nordic ski practice, but this time I was elated when her temperature peaked at 100.5 degrees.

A fever meant she was probably reacting to a real mRNA vaccine, and not a placebo. Maybe she’d won the vaccine lottery!

When Pfizer and Moderna were granted emergency authorization to license their vaccines in December, the shots were approved for people as young as 16 and 18, respectively. But in order to end the pandemic, many experts said that younger children will need to be vaccinated.

The adolescent Covid vaccine trials, for kids 12 to 18, got off to slow starts, in part because they took a while to find participants — Pfizer didn’t fill its 2,259 slots until late January and Moderna is still screening applicants to fill its 3,000 spots. These trials also may require more months of data to complete (perversely, as infection rates decrease, it will take longer for enough teens to become infected to see how the vaccines perform; plus kids may contract the virus less frequently than adults).

AstraZeneca, Johnson & Johnson and Novavax, whose vaccines aren’t licensed in the United States for adults yet, haven’t begun testing in children. Still, Moderna is hoping adolescents can at least start getting vaccinated before the beginning of the next school year.

“We are on track to provide updated data around midyear 2021,” said Colleen Hussey, a Moderna spokeswoman. If the adolescent data looks similar to the adult results, then the company could apply for emergency use authorization for the 12 to 18 age group — potentially getting shots in arms before school starts in the fall. 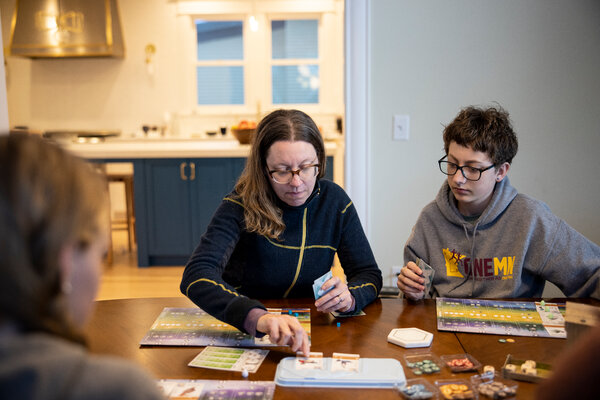 But that seems unlikely for younger kids, whose testing hasn’t even started. Hussey said the company plans to test kids under 12 at progressively younger ages down to 6 months. But the company hasn’t pinpointed when that will begin beyond “sometime in 2021,” and Moderna’s chief executive, Stéphane Bancel, has said data from that study most likely wouldn’t be available until 2022.

My family has been eager to sign up for a trial, which would offer us a shot at early immunity and a chance to be a part of a historic moment in science. So, when a representative from the Moderna trial called to ask if my kids, Wes and Zoe, would like to participate, they quickly became subjects number 56 and 57.

On a gray January afternoon, we were ushered into a gray exam room in downtown Minneapolis to learn the details of participating. A research coordinator explained that Moderna would pay the kids $75 per office visit and $30 per week for diary entries about their symptoms, which could total more than $1,000 over 13 months.

Sullivan explained the known risks of side effects from the vaccine, and Wes and Zoe’s enthusiasm only dwindled when she described the multiple nasal swabs and blood draws they were agreeing to (up to four of each over the course of six visits). But, buoyed by the possibility of being able to see their friends safely and, in the case of my son, upgrading his AirPods, they rolled up their sleeves.

Wes, looked like he was going to pass out during the blood sample draw, so the woman with the syringe, Karla McBrady, kept up an upbeat chatter: “I just want to say thank you for doing this! You may not even realize how much this is helping other people.”

Clinical trials typically begin with adult subjects, because they can give informed consent and serious side effects can be identified before kids are tested. Researchers also like to test vaccines on various ages separately because some aren’t safe or don’t work in younger people, said Dr. Robert Jacobson, a pediatrician and medical director of the Mayo Clinic’s Primary Care Immunization Program in Rochester, Minn. For example, the M.M.R. (measles, mumps and rubella), chickenpox and hepatitis A vaccines do not work well in those under 12 months, and the flu shot doesn’t work in babies under 6 months.

By testing increasingly younger ages, researchers hope to determine whether side effects play out similarly in adolescents and whether the vaccine reaches the same 95 percent efficacy in kids that it does in adults. That seems likely, given “the generally healthy and robust immune response in children 12 to 16 years old,” said Dr. Jill Weatherhead, an assistant professor of infectious disease at Baylor College of Medicine in Houston.

For the Covid vaccine, the most serious side effects have been severe allergic reactions (just 10 cases of anaphylaxis were detected out of 4,041,396 first doses of the Moderna vaccine, nine of which occurred in people who had known allergies). That’s a risk we were willing to take, but even seemingly small risks aren’t for everyone, Dr. Jacobson noted.

For Wes and Zoe, the shot itself was anticlimactic; even needle-averse Wes said it hardly hurt. Still, since most allergic reactions can occur within 30 minutes of a shot, we had to wait around for an hour afterward.

“If you’re going to have an allergic reaction, the best place to have it is in a research facility,” Dr. Jacobson said.

What You Need to Know About the Vaccine Rollout