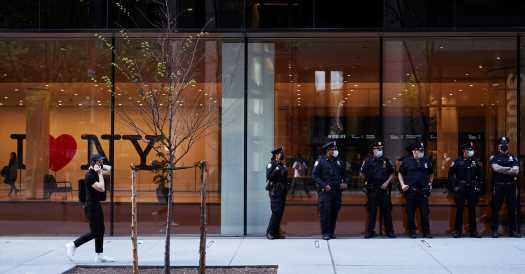 The Museum of Modern Art blocked protesters from entering the museum Friday afternoon at the conclusion of a march designed to focus attention on what the demonstrators say is the undue influence of wealthy patrons on the cultural institution’s values and programming.

The museum said it was forced to shut the doors when the protesters attempted to force their way into the museum. “In response, Museum security personnel closed the entrance in accordance with established safety protocols,” the museum said in a statement.

The museum statement said two guards were injured by protesters in the fracas. One of the protesters said she was punched by a guard.

Last week, organizers of the protest had addressed a letter to MoMA’s director, Glenn Lowry, calling the museum “a system of power and wealth that harms people” while criticizing several board members for their financial investments. Chief among those named was the billionaire Leon Black, who announced in March that he would leave his position as the museum’s chairman after widespread pressure from artists and activists over his ties to the convicted sex offender Jeffrey Epstein.

“We want to take over these institutions; they do not belong to the oligarchs,” Amin Husain, one of the demonstration’s organizers, told a crowd of about 40 activists before marching from Columbus Circle to the museum.

Husain had previously helped to organize nine weeks of protests at the Whitney Museum, which ended with the resignation of a veteran board member, Warren B. Kanders, who activists argued was not fit to serve as a trustee because his company, the Safariland Group, sold law enforcement and military supplies, including tear gas.

The Strike MoMA campaign, which is scheduled to last for 10 weeks through June 11, involves a coalition of activist groups that call themselves the International Imagination of Anti-National Anti-Imperialist Feelings. Their goals involve dismantling the museum’s hierarchy, which they accuse of burnishing the reputations of wealthy donors through art.

Before the demonstration, a MoMA spokeswoman had said that protesters, if they had tickets and passed a Covid-19 screening protocol, would be allowed inside the museum’s lobby. 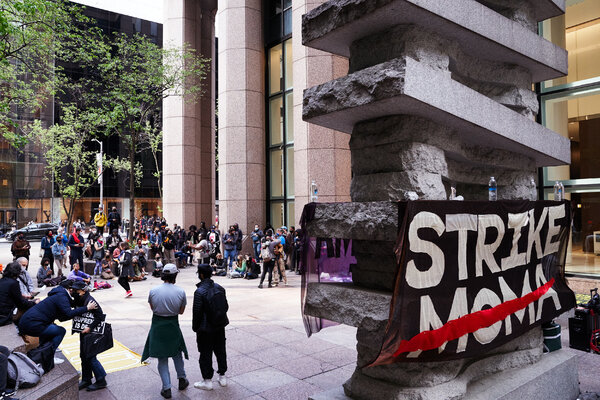 In an email to the staff earlier this month, Lowry said that the museum “respects the right to protest,” but added, “I do not agree that dismantling MoMA, or any museums, serves the best interests of the public.”

During the protest, visitors to the museum stood in the lobby, staring at the confrontation on the street with concern and confusion. Two people who identified themselves as museum employees walked out of the building, saying they were frustrated because museum officials had said at a staff meeting earlier this week that the protesters would be allowed inside.

“These attempts to stop us are futile,” said Shellyne Rodriguez, a former MoMA educator for eight years who is now affiliated with the protest group. “What Glenn Lowry has done is put his employees between a rock and a hard place.”

The museum said in its statement that the protesters had shown “complete disregard for the safety and wellbeing of our staff and visitors” by trying to “force their entry, en masse, into the museum.”