Mimi Stern-Wolfe, a pianist and conductor who specialized in music programs with a social-justice or political theme, most notably an annual concert that featured music of composers lost to AIDS, died on June 21 at a care center in Manhattan. She was 84.

Her daughter, Laura Wolfe, said the cause was complications of a series of strokes.

In the late 1970s Ms. Stern-Wolfe, a fixture on the Lower East Side of Manhattan for most of her adult life, founded Downtown Music Productions, which in the years since has presented a wide range of programs, including performances by and for children, eclectic shows by the Downtown Chamber and Opera Players, and concerts featuring works by women, music of the Holocaust and more. Ms. Stern-Wolfe played and conducted at many of the performances, often leading from the piano bench.

In 1990, moved by the death of her friend Eric Benson, a tenor claimed by AIDS in 1988, Ms. Stern-Wolfe started the Benson AIDS Series, concerts held almost every year since then to, in the words of her organization’s website, “promote the work of gifted composers and musicians who are fighting H.I.V./AIDS and to preserve the creative legacy of those who have already died.”

In the early years, with the disease still defying treatment, the concerts were charged with emotion; the audience included people who were visibly sick, emaciated and weeping as the music was played. In later years, she viewed the concerts more as a way to keep the music alive and to convey to a younger generation the trauma of those early years of the epidemic.

Rohan Spong, a documentary filmmaker, captured the preparation for the 2010 concert in “All the Way Through Evening,” a film released in 2012.

“Mimi felt passionately that the wider community remember the talented music composers affected by H.I.V./AIDS in the early years of the pandemic,” Mr. Spong said by email, “many of whom were felled at young ages, and whom she had known personally.”

“As she did with so many other issues,” he added, “she was able to synthesize her humanist values with her love of music and her dedication to her community.” The music she presented, he said, “seemed to cross space and time, communicating the beauty of these men’s lives and the tragedy of their deaths with an immediacy that was felt by audiences over two decades later.”

Miriam Stern was born on May 27, 1937, in Brooklyn. Her father, Bernard, was a pharmacist, and her mother, Emma, was a homemaker. She grew up in the Ozone Park neighborhood of Queens and in the Rockaways. Her parents were both immigrants — her mother, she said, had come from Chernobyl, in Soviet Ukraine — and they kept a lively household, which had an effect on young Mimi.

“They were not activists; they were sympathizers,” she said in a 2015 interview with the nonprofit group Labor Arts, which named her a recipient of the Clara Lemlich Award for social activism that year. “They were Jewish immigrant sympathizers and had friends who were both Zionists and Communists, and they all used to come to birthday parties and stuff, and argue. A lot. And I remember being kind of fascinated by that when I was a child.”

By age 6 she was taking piano lessons. She graduated from the High School of Performing Arts in 1954, earned a bachelor’s degree in music at Queens College in 1958 and received a master’s degree in music and piano performance at the New England Conservatory of Music in Boston in 1961. She lived and studied in Paris for a time before settling on the Lower East Side.

She had two passions, as she put it: classical music and “my political proclivities.” But she found that they rarely overlapped; people who were passionate about the causes she cared about didn’t generally have much use for classical music.

“What I wanted to do with my music was to find a way to synthesize my political ideas and my music,” she said. 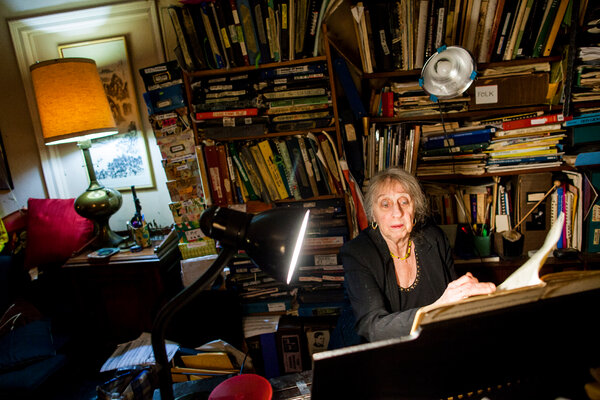 And so she organized concerts like “War and Pieces,” featuring music highlighting the consequences of war. She presented concerts devoted to the Rev. Dr. Martin Luther King Jr., Langston Hughes and Harriet Tubman. After the Occupy Wall Street demonstrations of 2011, she organized a concert of protest songs.

Other programs were more whimsical, like a 1987 concert titled “Notes From the Underground: Music as Satire.” And then there was “A Toast to the Steins,” with music by Jule Styne and Leonard Bernstein and a poem by Gertrude Stein set to music.

Ms. Stern-Wolfe’s marriage to Robert Wolfe in 1961 ended in divorce. In addition to her daughter, a singer-songwriter and child of that marriage, she is survived by her partner of 30 years, the poet Ilsa Gilbert, and a grandson.

Although Ms. Stern-Wolfe performed in many places, most of her productions were staged on the Lower East Side or in surrounding neighborhoods, by choice. She wanted to make classical music and other forms accessible to the people who were her neighbors.

“I didn’t want to go to the Upper West Side every time I went to a concert,” she said in a 2006 interview, “so I made a vow to bring the music down here. If I’d lived uptown, life would’ve been very different. Perhaps I’d have a job with City Opera.”