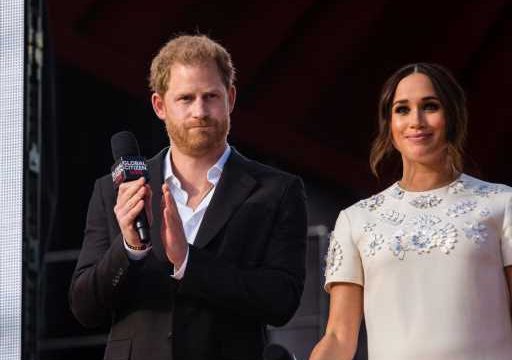 Prince Harry and Meghan Markle released their 2021 holiday card and we absolutely love their laid-back style. The couple chose classic colors for the photo — black, white and blue denim — it’s a palette that never goes out of fashion.

In following any member of the royal family, it’s important to remember that their wardrobe choices are intentional. When they are living by palace rules, there are strict protocols to follow. Now that Harry and Meghan have successfully carved out a life in the United States, they are reflecting their California cool lifestyle — sunny days and beachside living. (See the photo HERE.) It’s almost like you can smell the freedom from their former life in the image.

For Harry, being able to wear ripped jeans in public has to be quite a liberating feeling. He has spent most of his royal years in button-down shirts, ties and a suit — and now he can share a photo with the public that even shows a hint of his bare feet. That’s quite a 180-degree spin in terms of his royal look. Meghan looks equally as breezy in her jeans, black sweater and flats — and if you told us this was an ad for Gap or J.Crew, we would totally believe it.

But the most crucial thing that this photo indicates is their happiness. While they would probably love for the family feud to subside, the Sussexes have made a life for themselves that lets them live out their dreams in ways that would never happen if they continued in their senior royal roles. Life behind palace walls didn’t mesh with their passion projects, and because Harry isn’t in line for the throne, there was no reason for him to continue on such a confining path. And all of that is reflected in one simple Christmas photo in a pair of ripped denim jeans.

Before you go, click here to see Meghan Markle’s best fashion moments as a royal.