He may not be a singer by trade, but Mariah Carey is a big fan of David Beckham covering her Christmas tune.

The All I Want For Christmas Is You hitmaker, 52, has defrosted once again and returned to spread festive cheer far and wide as the big day creeps closer.

And one person getting into the Christmas mood early is Becks himself, with wife Victoria doing her duty to the internet and capturing his fabulous vocals on video.

Totally unaware that he was being filmed and scrolling mindlessly on his phone, the former Manchester United player, 47, sang away as the hit song played inside their home.

Sipping from his coffee cup and cutting a super chilled figure, the sporting legend gave fans a glimpse of what he’s like behind closed doors as he mumbled away in the kitchen.

‘@davidbeckham giving us his best @mariahCarey 🎶🎄😂’, Victoria joked in her caption, also teasing her husband after he clocked that she was videoing him. 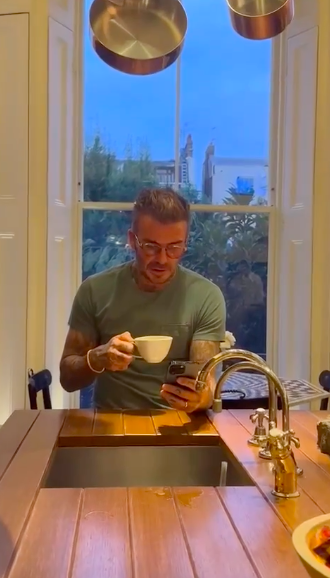 ‘You were struggling with those high notes, weren’t you?’, she chuckled, before David belted out an impressive run.

Keen to praise the footie icon for his vocal talents, the Queen of Christmas herself left a playful comment on Victoria’s Instagram.

And she wasn’t the only one hyping up David’s singing, with Kelly Rowland commenting: ‘SINGGGGGGG DAVID!!!!!!’.

Fans were also living for the video, with one joking: ‘He could’ve been a Spice Girl! He’s got pipes.’

‘Is there anything this man can’t do 😍’, asked another.

This is far from the first time fashion designer Victoria has given the people what they want by sharing some content of her other half at home.

For instance, on Halloween, she came through with a video of muscly Becks in his Mr Incredible costume.

However, while the cheery video gave plenty of social media users a smile, it comes at a time when David’s public image isn’t exactly sparkling.

The star has faced intense criticism since becoming the ambassador for Qatar ahead of the World Cup, due to the Arab country’s shocking record on human rights.

With homosexuality illegal in Qatar, a lack of rights for women, and the deaths of thousands of migrant workers in the lead up to the tournament, footie fans have called for David to end his multi-million-pound deal with the country.

The likes of Joe Lycett and Will Young have also spoken out, with David previously referring to Qatar as ‘perfection’ in a promotional video.

He’s yet to address the backlash himself, and has been spotted in the stands at multiple games in Qatar cheering teams on from the VIP stands.