Warning: this article contains spoilers for the season six premiere of BBC One’s Line Of Duty. Proceed with caution…

Firstly, our beloved DI Kate Fleming (Vicky McClure) is no longer working with AC-12. “I got fed up nicking coppers,” she says, by way of explanation. “I’d rather go after the psycho that murdered Gail Vella.”

Of course, Fleming might have walked away from the anti-corruption unit, but that doesn’t mean her work is done. It’s not long before old pal DS Steve Arnott (Martin Compston) is texting her after dark, flashing his headlights at her in the carpark (“What kind of a knobby signal was that?” she asks him exasperatedly), and coaxing her into helping him get his investigation into DCI Jo Davidson (Kelly Macdonald) – aka Kate’s new boss – off the ground.

Too bad that her old gaffer, a disgraced Ted Hastings (Adrian Dunbar), isn’t sure if Kate’s supposed loyalty to AC-12 can be trusted, eh?

“This is why I’m leaving!” Jo tells Farida angrily, unable to deal with this accusation (or the fact that Farida has sliced a hole or two into her favourite leather jacket). “This madness!”

Does this mean, then, that Farida’s assertions about Jo are borne from knowing her character inside and out? Or from utterly irrational jealousy? Only time will tell, we guess.

Line Of Duty season 6: all the Easter eggs hidden within that explosive new trailer

Thirdly, it seems the conspiracy theories are true; Steve has developed an addiction to over-the-counter painkillers. In fact, his cupboards are positively rammed with pill boxes – and he spends his evenings chasing tablets down with beer. In this particular instance, a bottle of Corona – which this writer assumes is one of the oh-so-subtle nods to the Covid-19 pandemic that we were promised by Jed Mercurio ahead of this season.

Then, finally, we have the parallel cases being investigated by our favourite TV coppers: there’s the murder of journalist Gail Vella (Andi Osho), which Kate and Jo are working on together, and the possibility that Jo is a potential supervillain in the making, hellbent on doing everything she possibly can to ensure Vella’s killer is never apprehended.

And so, just like that, the first episode of Line Of Duty season six has left us with an abundance of questions.

Here, Stylist’s digital editor-at-large Kayleigh Dray does her best to unravel them all.

What is a CHIS?

Look, if you’re anything like this writer, that unexpected acronym will have pulled the rug out from under your feet in the show’s opening minutes. Don’t worry, though, I’ve got you: CHIS stands for Covert Human Intelligence Source – and their handlers are vital in safeguarding their sources from many serious crimes including terrorism, drugs and firearms offences and child sexual exploitation.

Did Jo prevent the arrest of ‘Ross Turner’?

Now, onto the meaty stuff; thanks to a tipoff from a CHIS (ha!), the police have a new suspect – Ross Turner. Unfortunately, it’s likely a fake name, as there’s no record of Ross Turner anywhere, but they do have an address for him: Flat 4F Beechwood House.

Jo derailed the arrest of Ross Turner to stop an armed robbery in the first episode of Line Of Duty season 6.

During a high-speed raid on the property, though, Jo spots a suspicious-looking van parked on a wee side road opposite a local betting shop, and requests that Kate check its number plate, SH13 GEK. It quickly becomes apparent that it’s a fake plate, so Jo orders her team intercept the vehicle in order to “prevent risk to the public.”

Her intuition is spookily bang-on; the van is involved in an armed robbery, and her AFOs prove vital in bringing the suspects down. It does mean, though, that her team’s original mission – to seize and arrest Turner – is delayed by up to an hour.

Later, CCTV examined by Ted and Steve shows that the police convoy was moving far too quickly for Jo to have reasonably spotted the parked van. Likewise, she had a very narrow line of sight, as it was just tucked out of the way of the main road – and the armed robbers apprehended have suspiciously clean records.

Throw in the fact that the surveillance team were pulled off duty for three hours due to a paperwork issue, and things look less than rosy for Jo. Could it be that the armed robbery was staged to delay Turner’s arrest?

BBC’s Line Of Duty: the 8 big questions we need answering in season 6

Who is Terry Boyle?

The man they arrest at Flat 4F Beechwood House isn’t Ross Turner, but an extremely vulnerable Terry Boyle (Tommy Jessop). A quick spin in the police interrogation room confirms that Terry actually resides in the Kingsgate area – just like the late Gail Vella – at Flat B Dorton Villas.

Several things don’t add up, however. Forensics teams deployed to Terry’s actual place of residence, for example, are confused by what they find there. “We’re not finding much evidence of this being anyone’s permanent state of residence, let alone the suspect’s,” one officer tells Kate. “The place is clean. Extremely clean.”

Traces of bleach and other cleaning fluids are dutifully found and reported, too, leading Jo to suggest that someone staged a thorough (and suspicious) cleaning of Flat B Dorton Villas. Weirdly, though, they left a collage of Gail Vella photos pinned to the wall – some of which are coated in what appears to be Terry’s semen. Hmm.

Then there’s evidence that a freezer was removed from the property, which… well, which obviously confirms that something dodgy took place (we all remember that season one’s Jackie Laverty was in that freezer, right?). 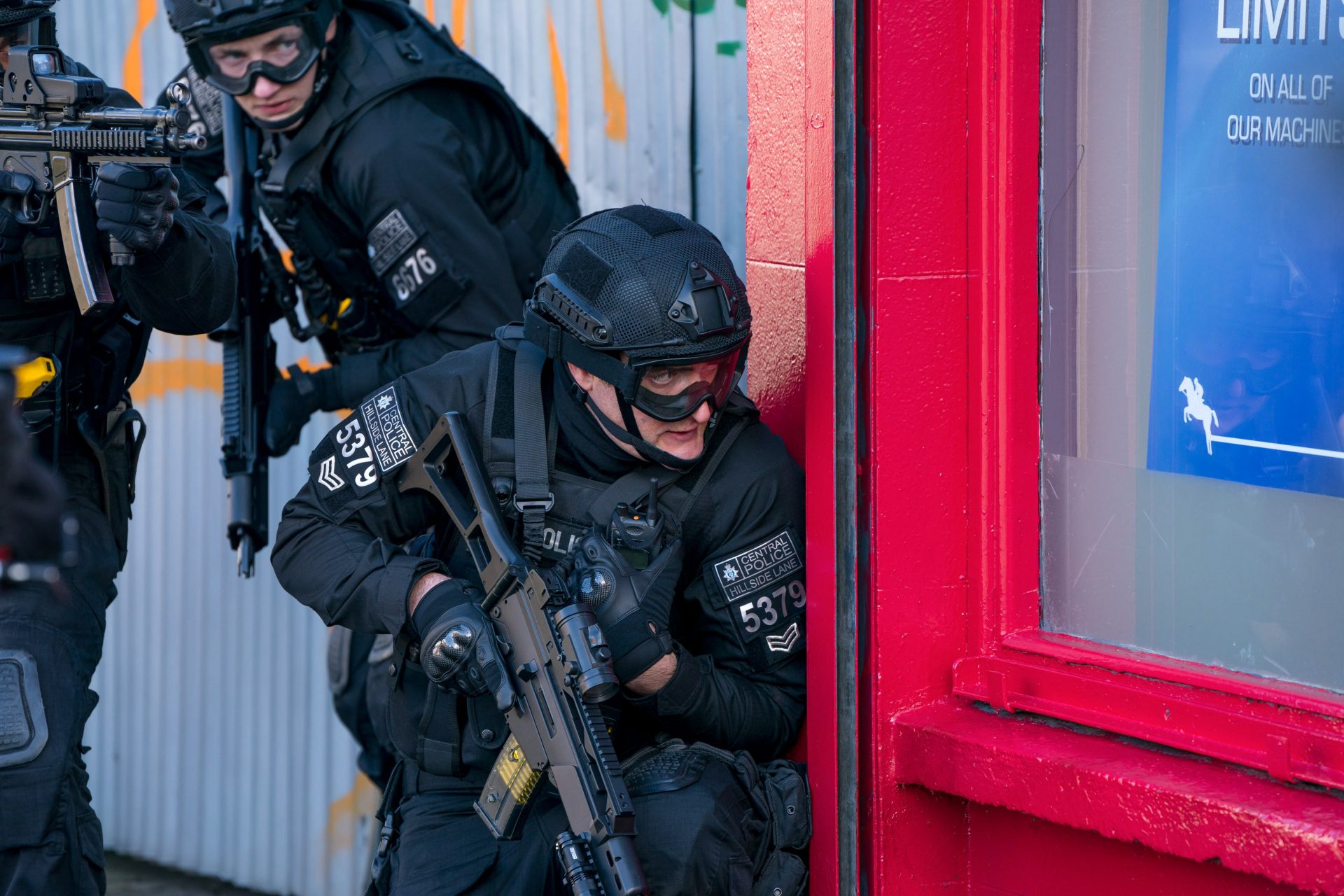 Line Of Duty fans are confused as to who Terry truly is.

Kate is also concerned by the fact that Flat 4F Beechwood House – where Terry was found and arrested – shows signs of forced entry, including a damaged chair that had apparently been pushed up against the door handle. She opines that the flat is too nicely maintained for this to have happened a long time ago; Jo, however, insists that it’s “unlikely, but not impossible” that the damage is unrelated to Terry’s being in the flat in the first place.

Then, there’s the gunshot residue and evidence of heroin use at Flat B. Indeed, when Terry is asked directly whether or not he shot Gail (a woman he refers to as a “nice lady”), he becomes visibly distressed – and even more so when they ask him how he knows Carl Banks, who may or may not be related to season five’s Balaclava Men associate, Lee Banks.

Which brings us to our next question…

Who is Carl Banks?

As Kate tells Steve during their late-night drive, her crime scene was covered in prints belonging to Carl Banks. And, when he does a little digging, he learns that Banks has a long criminal history, particularly with regards to firearms – making him a prime suspect in the original line of inquiry for Gail Vella’s murder (that hers was an arranged murder).

Steve’s theory, then? That Carl killed Gail, and that Jo deliberately delayed the arrest of ‘Ross Turner’ in order to allow Banks time to flee.

But then… well, if that was the case, then why did she release Terry Boyle without charge? Surely, if she was trying to find a scapegoat, she’d keep him in police custody for a wee while longer?

Did anyone else pick up on a frisson of sexual tension between Kate and Jo?

They did hold hands and lock eyes for a mite longer than strictly necessary, but… maybe that’s just me. Let’s move on.

Who killed the CHIS?

Look, our poor unnamed CHIS is found dead from a high fall, in a CCTV blind spot, and a number of people reported hearing a scream. He was pushed, wasn’t he? He was pushed… but by who?

And why has Farida reported Jo to AC-12?

It’s easy to assume that Farida is an incensed and jealous ex-girlfriend, looking to get revenge on the woman who broke her heart. Of course it is. But…

Well, she’s kind of been bang on the money about a lot of things, too. Firstly, about the fact that the police convoy was moving too fast for Jo to reasonably see the armed robbery taking place. Secondly, that there’s some chemistry bubbling between Jo and Kate (fine, fine – still just me then). And let’s not forget the exact words she says to Steve over the phone, either.

“Our most important witness has been found dead,” she says urgently, tears streaming down her face. “This is too dangerous. You have no idea what’s she capable of, none at all.

Line Of Duty season 6: Martin Compston says there are “big answers” ahead

Could it be that Farida knows exactly what Jo’s been up to and, until now, felt compelled to keep it hidden due to their relationship? Could she be involved herself, somehow?

We guess we’ll have to wait until next week’s instalment of Line Of Duty to find out.

The second episode of Line Of Duty season six will air at 9pm Sunday 28 March on BBC One.