If fans thought they knew all the details behind Lamar Odom’s cheating on Khloé Kardashian while they were married — they don’t — he’s now revealing that they only know half the story. The former NBA star is telling everyone that what he put his ex-wife through was much, much worse.

In a Jan. 2 special, TMZ Presents: Lamar Odom: Sex, Drugs & Kardashians, Odom is sharing details of what it was like for Khloé to be married to him during that tumultuous four-year period — let’s just say it sounds terrible. “Behind the scenes, I put her through s**t. Like, s**t that y’all don’t know,” he shared in a preview clip. “The s**t y’all know, what y’all think y’all know, it’s crazy. But the stories that y’all don’t know is, like, really crazy.” Not only did he have “random women coming out,” but he also admitted that “some of them all came out at one time.”

What’s even more baffling is that the athlete engaged in “full-blown relationships” even though he knew he had a very dedicated and loving wife waiting for him at home. He also didn’t seem to care that his every move was going to be covered by the press because he married into a famous family — he felt untouchable. “Your wife is Khloé Kardashian. You buggin’,” Odom added. “I’m, like, laughing out of embarrassment right now. Like, how you thought you was going to get away with that one?” Spoiler alert — he didn’t.

Odom has openly talked about how much he misses the Good American founder and how badly he screwed up their union. The couple was married in 2009 and went their separate ways in 2013, but Khloé remained by his side after his overdose in October 2015. Their divorce was official in 2016. Odom still sounds like he lives a life filled with regrets over how he humiliated Khloé during their married years, but he now knows she deserved to be treated much, much better.

Before you go, click here to see all the celebrities who have admitted to cheating on their partners. 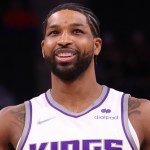 Tristan Thompson & Daughter True Perform the Cutest Choreography: ‘When My Princess Asks if Daddy Can Dance …’