Kim Kardashian says she has her sister Kourtney Kardashian and the University of Arizona to thank for not turning into a “wild party girl.”

The KKW Beauty founder and reality star shared a throwback photo with Kourtney ― at Kourtney’s alma mater ―  on Wednesday and shared more about the pivotal moment in an Instagram post.

“College Years Baby!!!” Kim captioned the picture, which shows the sisters smiling for the camera. “University of Arizona single handedly stopped me from turning into a wild party girl.”

“I remember visiting Kourt on campus and being her designated driver. I hated all of the wild parties so much that I stayed home and never wanted to drink or party EVER,” Kim said. “So thank you U of A. I was never a student there but u shaped my life more than you know.”

The post irked sister Khloé Kardashian, whom Kim forgot to mention. “I was there that night too bitch,” the younger sibling commented on the photo.

Kourtney, meanwhile, said she had a very different recollection of that night.

“I remember feeding you jungle juice and someone else driving I won’t name names and blasting Ruff Ryders,” Kourtney shared on her own Instagram, although she also admitted: “maybe I was partying too hard to remember correctly, anyone else who was there wanna chime in?” 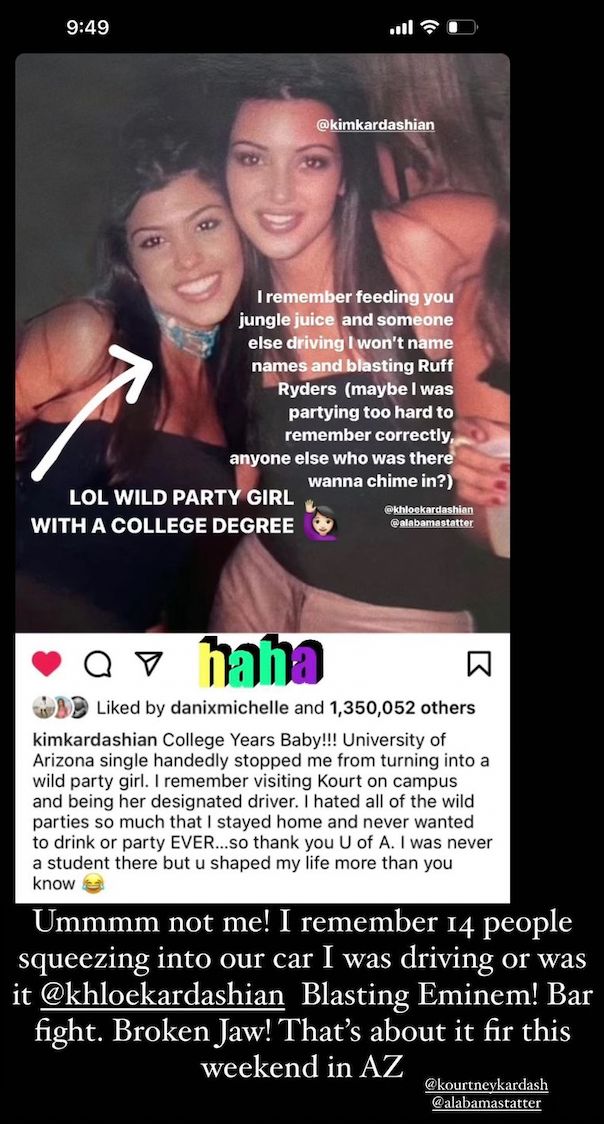 An anonymous source told People magazine in 2019 that Kim “pretty much doesn’t drink at all.”

“She’s not a partier and it’s just not part of her life,” the source added. “Occasionally she’ll have a drink, but she really doesn’t like the taste of alcohol.”

Kim previously joked on an episode of “Keeping Up With the Kardashians” that she doesn’t indulge after accidentally spilling the news that she and Kanye West were expecting a fourth child.

“I told someone at Christmas Eve and I don’t remember who I told ’cause I was drunk,” Kim told Scott Disick in a clip from the show in 2019. “It was my fault. That’s why I don’t drink.”