Johnny Pacheco, the Dominican-born bandleader who co-founded the record label that turned salsa music into a worldwide sensation, died on Monday in Teaneck, N.J. He was 85.

Fania Records, which he founded with Jerry Masucci in 1964, signed Latin music’s hottest talents of the 1960s and ’70s, including Celia Cruz, Willie Colón, Hector Lavoe and Rubén Blades. Mr. Pacheco, a gifted flutist, led the way on and off the stage, working as a songwriter, arranger and leader of the Fania All Stars, salsa’s first supergroup.

From the beginning, he partnered with young musicians who were stirring jazz, rhythm and blues, funk and other styles into traditional Afro-Cuban music.

By the 1970s, Fania, sometimes called the Motown of salsa, was a powerhouse in Latin music, and the Fania All Stars were touring the world. The label gave birth to combustive creative collaborations, like that between Mr. Colón, a trombonist and composer, and Mr. Blades, a socially conscious lyricist and singer; and to cult heroes like Mr. Lavoe, the Puerto Rican singer who battled drug addiction and died of AIDS-related complications at 46.

Fania dissolved in the mid-1980s amid lawsuits involving royalties, and in 2005, Emusica, a Miami company, purchased the Fania catalog and began releasing remastered versions of its classic recordings. 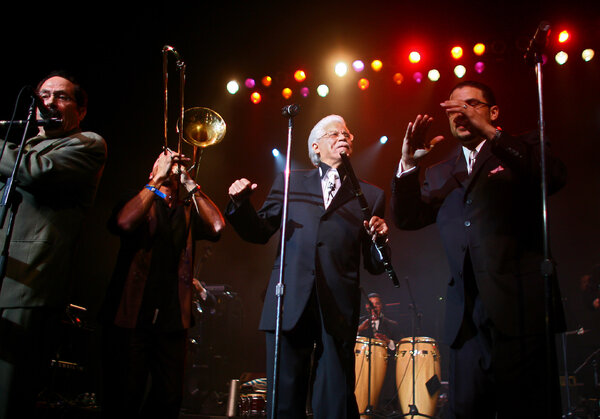 Juan Azarías Pacheco Knipping was born on March 25, 1935, in Santiago de los Caballeros, in the Dominican Republic. His father, Rafael Azarias Pacheco, was a renowned bandleader and clarinetist. His mother, Octavia Knipping Rochet, was the granddaughter of a French colonist and the great-granddaughter of a German merchant who had married a Dominican woman born to Spanish colonists.

The family moved to New York when Johnny was 11, and he studied percussion at the Juilliard School and worked in Latin bands before starting his own, Pacheco y Su Charanga, in 1960.

The band signed with Alegre Records, and its first album sold more than 100,000 copies in the first year, becoming one the best-selling Latin albums of its time, according to his official website. It jump-started Mr. Pacheco’s career with the introduction of a new dance craze called the pachanga. He became an international star, touring the United States, Europe, Asia and Latin America.

Fania Records was born out of an unlikely partnership between Mr. Pacheco and Mr. Masucci, a former police officer turned lawyer who fell in love with Latin music during a visit to Cuba.

From its humble beginnings in Harlem and the Bronx — where releases were sold from the trunks of cars — Fania brought an urbane sensibility to Latin music. In New York, the music had taken on the name “salsa” (Spanish for sauce, as in hot sauce), and the Fania label began using it as part of its marketing.

Guided by Mr. Pacheco, artists built a new sound based on traditional clave rhythms and the genre Cuban son (or son Cubano), but faster and more aggressive. Many of the lyrics — about racism, cultural pride and the tumultuous politics of the era — were far removed from the pastoral and romantic scenes in traditional Cuban songs.

In that sense, salsa was “homegrown American music, as much a part of the indigenous musical landscape as jazz or rock or hip-hop,” Jody Rosen wrote in The New York Times in 2006 on the occasion of the reissue of the Fania master tapes — after they had spent years gathering mold in a warehouse in Hudson, N.Y.

Mr. Pacheco teamed up with Ms. Cruz in the early 1970s. Their first album, “Celia & Johnny,” was a potent mix of hard-driving salsa with infectious choruses and virtuosic performances. It soon went gold, thanks to Ms. Cruz’s vocal prowess and Mr. Pacheco’s big-band direction, and its first track, the up-tempo “Quimbara,” helped propel Ms. Cruz’s career to Queen of Salsa status.

The two released more than 10 albums together; Mr. Pacheco was a producer on her last solo recording, “La Negra Tiene Tumbao,” which won the Grammy for best salsa album in 2002.

Over the years, Mr. Pacheco produced for several artists and performed all over the world, and he contributed to movie soundtracks, including one for “The Mambo Kings,” a 1992 film based on based on Oscar Hijuelos’s novel “The Mambo Kings Play Songs of Love.” For the Jonathan Demme movie “Something Wild,” he teamed up with David Byrne, leader of the Talking Heads, one of his many eclectic partnerships.

Mr. Pacheco, the recipient of numerous awards and honors both in the Dominican Republican and the United States, was inducted into the International Latin Music Hall of Fame in 1998. He wrote more than 150 songs, many of them now classics.

For many years he spearheaded the Johnny Pacheco Latin Music and Jazz Festival at Lehman College in the Bronx, an annual event in collaboration with the college (streamed live in recent years) that provides a stage for hundreds of talented young musicians studying music in New York City schools.

In addition to this wife, Mr. Pacheco’s survivors include two daughters, Norma and Joanne; and two sons, Elis and Phillip.

The salsa phenomenon that Mr. Pacheco created hit a new high on Aug. 23, 1973, with a volcanic sold-out show at Yankee Stadium, where the Fania All Stars brought 40,000 fans to a musical frenzy, led by Mr. Pacheco, his rhinestone-encrusted white shirt soaked in sweat. The concert cemented the band’s, and his, legendary stature.

In 1975, Fania released the long-awaited double album “Live at Yankee Stadium,” which, despite the name, also included material from a show at the Roberto Clemente Coliseum in Puerto Rico that had much better sound quality. The album earned the Fania All Stars their first Grammy nomination for best Latin recording.

In 2004, the Library of Congress added it to the National Recording Registry.