John Clem Clarke, a young star during the glory days of the SoHo art scene in the 1960s and ’70s and an early practitioner of Pop Art who went on to keep that aesthetic movement and his Manhattan neighborhood’s bohemian spirit alive into the 21st century, died on June 5 at a nursing home in Keizer, Ore. He was 83.

The cause was dementia, his daughter, Trillion Layne, said.

In the 1970s, Mr. Clarke earned comparisons to figures now considered modern masters, like Andy Warhol, Roy Lichtenstein and Robert Rauschenberg, for the wit with which he made what critics called “art about art” and for an aesthetic style that incorporated the techniques of industrial mass production.

He became known for reinterpretations of canonical paintings. Using a projector, he broke down images of those paintings into stencils and used sponges or homemade spray-paint cans to paint a canvas. His distorted masterpieces looked blurred or brightened, dilated or flattened.

In the 1960s, he devoted an entire show to reproductions of the American painter John Singleton Copley’s staid “Portrait of Mr. and Mrs. Thomas Mifflin” (1773). In several takes, Mr. Clarke washed out the skin pigmentation of the two human figures, rendering the couple in an eerie alabaster hue. 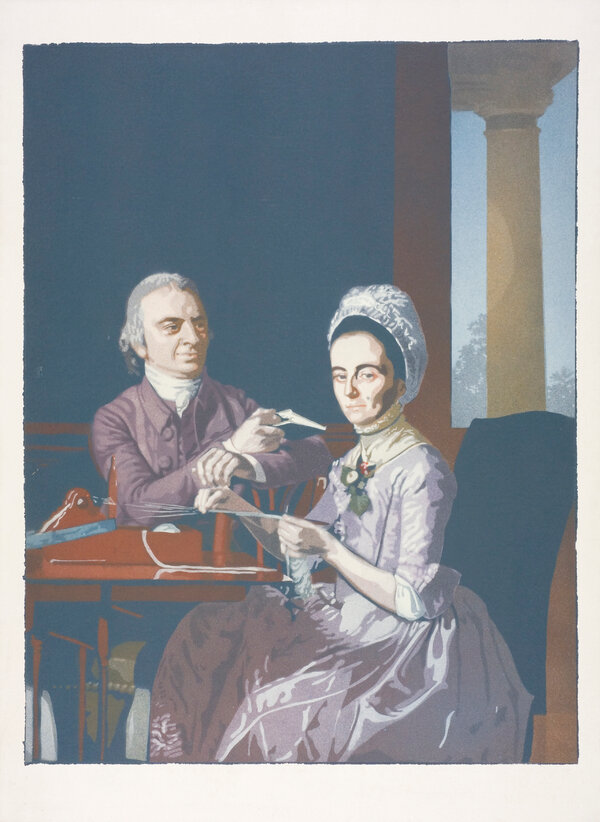 In a series reimagining the Flemish artist Peter Paul Rubens’s 17th-century paintings of the Greek myth “The Judgment of Paris,” Mr. Clarke replaced the figures with photorealist images of toned, bronzed models who seemed to belong poolside at the Playboy Mansion.

Artforum said in 1970 that Mr. Clarke could make a cold, mechanical process result in “delightfully sensuous paintings.” In 1979, the art critic David L. Shirey wrote in The New York Times that Mr. Clarke “magically merges the past and the present.” The Museum of Modern Art and the Whitney Museum of American Art both acquired several of his paintings.

Mr. Clarke wanted his style to convey the vibrancy he saw in American pop culture. His introduction to art came through comic books and textbooks. When he traveled to Europe as a young man and visited museums, he found that paintings in their original form “weren’t really as real as my little pocketbook things that I had been studying for years,” he said in a 1972 interview with the Smithsonian Institution.

By using images already familiar from classic works of art, Mr. Clarke sought to draw viewers’ attention away from the content of his paintings to their form — the way the tools of American commercial media, like stencils and airbrushing, could generate artistic expressiveness and beauty.

That sensibility appealed to the gallerist Ivan Karp, who helped launch the careers of artists like Warhol and Lichtenstein. When Mr. Karp opened one of the first galleries in SoHo, OK Harris, one of his early shows was an exhibition of work by Mr. Clarke, who bought a loft upstairs in the same building on West Broadway.

In the ’70s, SoHo’s ruggedness had a kind of glamour. Mr. Clarke gave a large mural to a local bar in exchange for years of free drinks. He invited the downtown artist community to his house in Hancock, N.Y., for a Fourth of July party and a game of tug of war. It was evenly matched until the painter and sculptor Richard Artschwager joined one side and yanked.

“A lot of people had bad backs for life,” Mr. Karp’s widow, the artist Marilynn Gelfman Karp, recalled in a phone interview.

John Clem Clarke was born on June 6, 1937, in Bend, Ore. His parents, Eugene and Wilma (Owen) Clarke, were schoolteachers. John grew up in a rural area in the Willamette Valley, where the family moved after his father became a farmer raising wheat, rye grass and sheep.

John attended a one-room schoolhouse and learned how to drive a tractor. He passed the time by kicking a football onto the roof of his family’s barn. In high school, he became an all-state fullback, and he was the kicker in the 1957 Rose Bowl for Oregon State, where he had a football scholarship.

He threw himself into art classes after transferring to the University of Oregon. In 1960, he graduated with a bachelor of fine arts degree. He traveled around Europe and then moved to New York, where as a struggling artist in the mid-1960s he spent $85 a month on rent and $15 a month on food.

After becoming successful, Mr. Clarke bought the loft in SoHo, three studios in Greenwich Village and two homes on the Caribbean island of Tortola. The money he made in renting out his properties enabled him to focus on art.

In the 1980s, he began producing original work inspired by the comics and ads of his youth. His depictions of buttered corn, cherry pie and shiny cars showed an ironic but sympathetic approach to Americana.

“It would be nice if a picture of mine could get a small smile out of the soul rather than a tragic response, which is what so much of art gets,” Mr. Clarke told The Santa Fe New Mexican in 1995.

He employed that style for three 40-by-80-foot murals that hang on the east side of Chelsea Piers in Manhattan, though in recent years they have been covered by ads. Ms. Karp called the murals “buried treasure.”

He and his former studio assistant, Jane Purucker, married in 1979 and divorced in 2003. (Ms. Clarke later married the Hall of Fame pitcher Sandy Koufax.) In addition to his daughter, Mr. Clarke is survived by two grandchildren.

As Mr. Clarke aged, health problems interrupted his regular visits to the old SoHo artists’ haunt Fanelli Cafe. But until he moved to a nursing home in 2018, he continued living in his loft and making art.

Few of the artist pals Mr. Clarke had played tug of war with were left in the neighborhood, which had also grown too expensive for young artists. Ms. Clarke said he “preserved” the SoHo culture of his youth “by staying in and painting all day.”